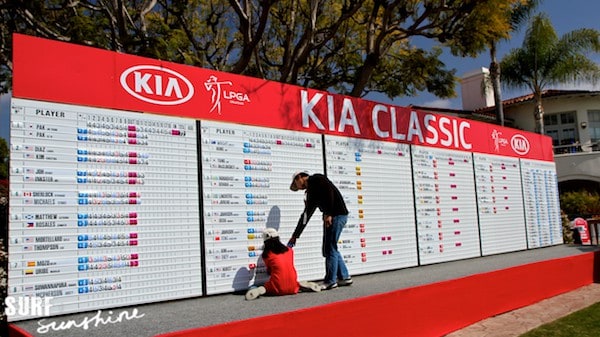 Last week my family and I attended the 2013 Kia Classic LPGA, held at the beautiful Park Hyatt Aviara Resort in Carlsbad, California. The Fourth Year of the Kia Classic featured a 72 hole course in an absolutely gorgeous setting. This women’s golf tournament featured 144 of today’s best women golfers playing for a huge $1.7 million purse. 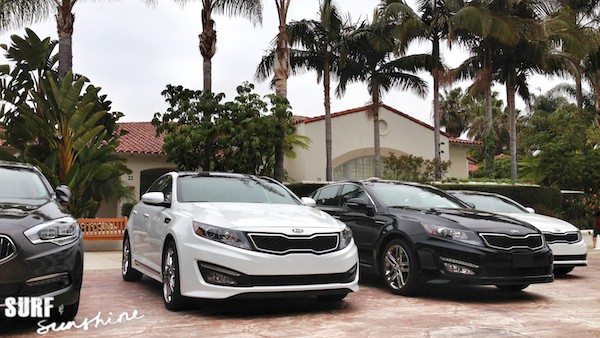 Aside from all the top notch action going on around us, it was also pretty hard to miss the brand new Kia Cadenza strategically placed in eye catching locations throughout the course…like floating on water, for instance. 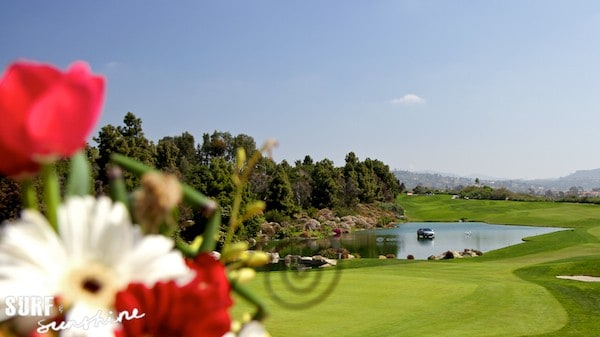 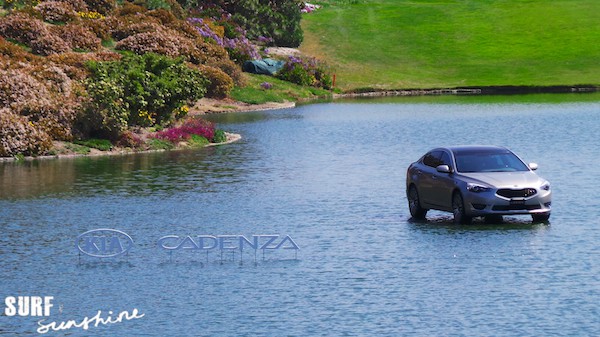 Stunning, isn’t it? Well as luck (or skill) would have it, Jin Young Pak scored a hole in one on the 14th hole on Friday which meant she was going to take home a Kia Cadenza of her own! Color me jealous!

Since this was the first golf event I had ever attended, I wasn’t entirely sure how well the day would go over with a 3 year old in tow. Turns out we all had a fantastic time!

Of the 144 women golfers there were many familiar names including 2012 Kia Classic Champion Yani Tseng, Rolex Player of the Year Stacy Lewis, and other favorites like Michelle Wie, Paula Creamer and Rebecca Lee-Bentham. We actually started off the day getting to meet and speak with Michelle Wie, who is enviably tall, gorgeous and super nice to boot! 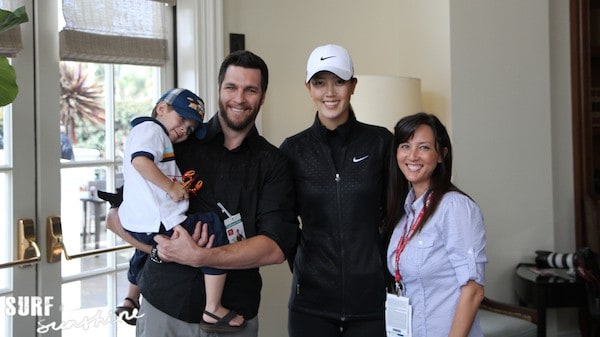 Michelle Wie was born in October 11, 1989. Not only is she a professional golfer in the LPGA Tour, but she is also a student at Stanford University. At only 10 years old she was the youngest player to qualify for a USGA amateur championship. Michelle has already won two events on the LPGA tour, has had seven top-ten finishes in Major competition, as well as having shot the lowest round ever recorded by a woman golfer in a men’s PGA tour event. Since then has has received international attention for her golfing ability and is easily one of the most influential athletes in women’s sports. But Michelle is more than an athlete. She dabbles in art, blogging and is a serial tweeter.

From there we watched a few players practice on the putting green from the balcony of the clubhouse. We had a great view and Whistler loved seeing the balls make it in the hole (for the most part!) 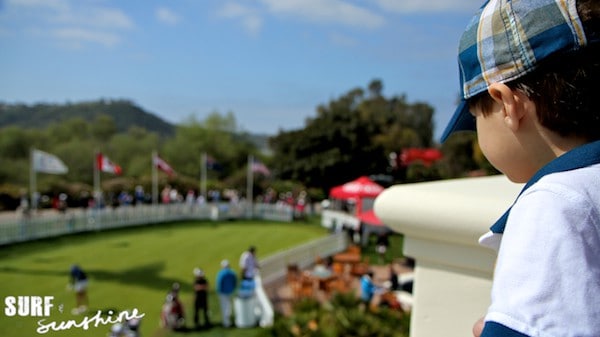 It was from this vantage point that I spotted some must-have crochet animal golf club covers. How stinkin’ adorable are these? 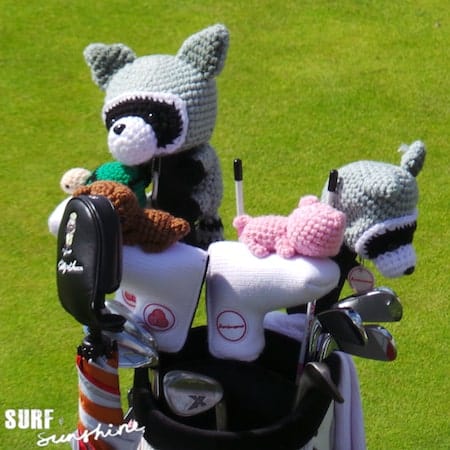 After a little bit of googling, I was able to find a couple free patterns. My favorite is this Gopher Golf Club Cover which would be perfect for Ben’s Driver. (and maybe if I had this cute little guy on my clubs, I’d play more) 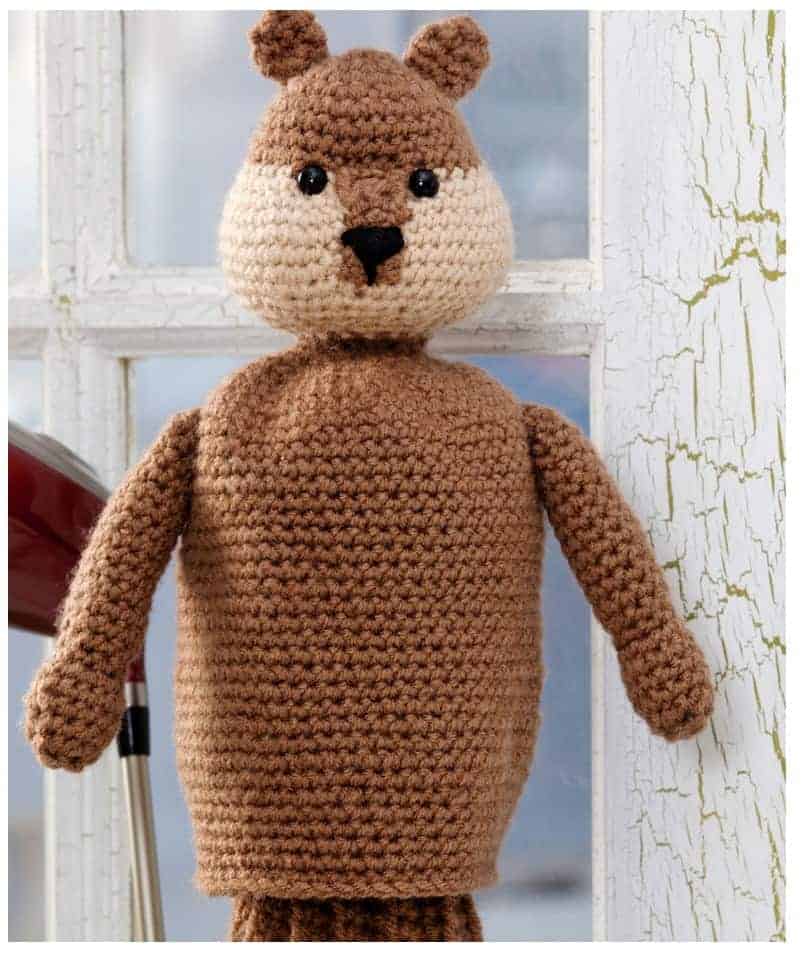 After stopping to get an up close look at the Kia Cadenza (here is Whistler showing us proper golf etiquette while on the course), 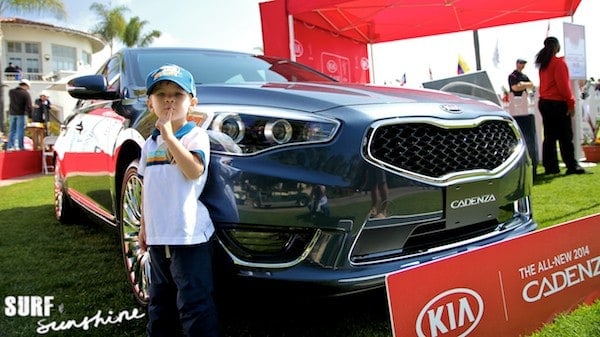 we strolled over to the Champions Club Skybox and enjoyed an excellent upfront view of the 18th hole, along with a delicious lunch and some cold beverages. To our surprise, Rebecca Lee-Bentham came up to Whistler and asked if he’d like a signed golf ball. 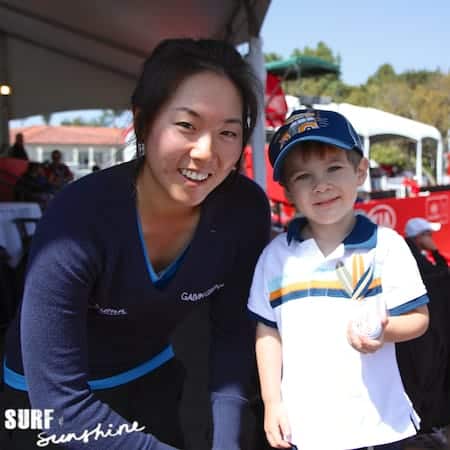 This was sooo sweet of her to do! He was incredibly thrilled and carried that ball around for days afterwards! 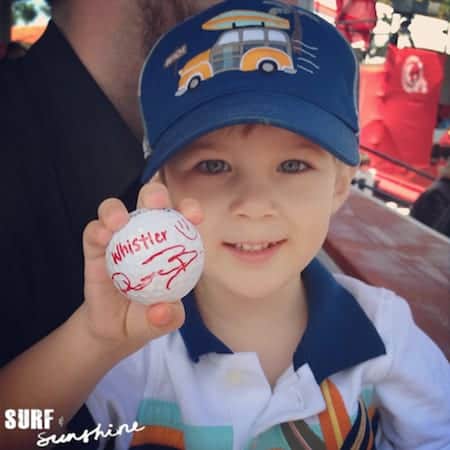 Rebecca Lee-Bentham was born in 1992 in Canada. She started playing golf at the age of 12 and credits her father as the person who most influenced her game. As an amateur, she really started to bloom in 2010, when she won the Canadian Junior Girls Championship and played in the Canadian Women’s Open and US Women’s Open for the first time. Outside of golf her hobbies include skiing, sailing and cooking. She’d also like to one day be able to help feed people in starving countries. <—- I love her for this!

In the end, it was the chill in the air and a contentedly passed out toddler that finally closed out our great day. As for the tournament, Beatriz Recari of Spain ended up taking home the winner’s trophy after her -9 under par, 2-hole playoff victory over I.K. Kim of South Korea during the Final Round of the LPGA 2013 Kia Classic.

A big, big thanks to Kia for inviting my family to attend the 2013 Kia Classic at their expense. All opinions are original and remain my own.