This post brought to you by Hallmark Hall of Fame. The content and opinions expressed below are that of Surf and Sunshine.

Jason Michael Lee was born and raised in Orange County. At the age of 13 he took up skateboarding and by 18 he was on the professional circuit. However, after moving to Los Angeles during his early twenties, he became interested in acting and began his career with commercials and music videos. His career bloomed with numerous roles on the big screen as well the small screen. He is also a successful entrepreneur and artist but it doesn’t look like he will be slowing down anytime soon.

1. Jason Lee dropped out of high school to be a pro skate boarder and his dream became realization. Jason was a professional skateboarder for 7 years before retiring in 1996.

2. He chose to name his son ‘Pilot Inspektor’.

3. During an interview Lee stated that he was inspired to become an actor by the Coen brothers’ film, Barton Fink (1991), particularly by Steve Buscemi’s performance as “Chet”.

4. Lee is a professional photographer, in addition to personal projects he photographs for Anthem magazine based out of Los Angeles. He is also an avid supporter and collector of the arts.

5. His latest work is a Hallmark Hall of Fame original: Away and Back. 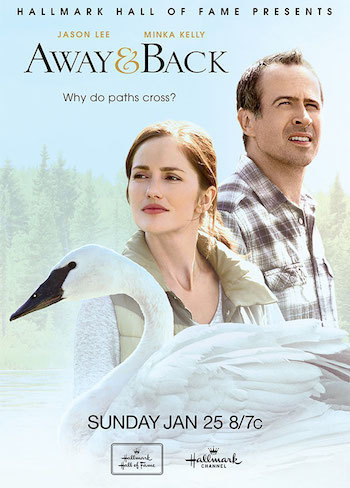 When a family of swans makes their home on the Peterson farm, it’s love at first sight for 10-year-old daughter Frankie (Maggie Elizabeth Jones).  But along comes no-nonsense ornithologist Ginny Newsom (Minka Kelly), who rushes in to “save” the majestic birds.  For Frankie’s dad Jack (Jason Lee), it’s dislike at first sight when he encounters pushy, know-it-all Ginny.  Frankie and her brothers are anything but neutral observers as they watch the initial hostility between their widowed father and the strong-willed Ginny transform into something else. The movie stars Jason Lee and Minka Kelly, and is directed by Jeff Bleckner, director of Hallmark Hall of Fame fan favorites like Remember Sunday (2013) and Loving Leah (2009).

41 thoughts on “5 Things You Didnt Know About Jason Lee”