It’s always fun to attend the press junket for a film, and The Good Dinosaur was no different. You never know where the discussion will lead and what insights will be gleaned.

We all took our seats as the first group arrived; Jeffrey Wright who plays “Poppa” and Raymond Ochoa who plays “Arlo”. Despite playing father and son in the film they admit that they had just met about 3 hours prior. This isn’t unheard of and actually common for an animated film. Much of the time actors record their dialogue separately. Jeffrey was just as warm and caring as the character he plays onscreen. He joked that he’s definitely become the “cool dad” now that he has the Hunger Games and a Pixar movie under his belt. He loved the film’s themes of family, parenthood, and love. Raymond was full of energy and so grateful to have been chosen for the project. In preparation for his character he researched the Apatosaurus and was surprised by their appearance. Jeffrey chimed in and jokingly said that he prepared by studying Apatosaurus farming techniques. In the film, the dinosaurs act like humans; Apatosauruses are farmers and Tyrannosaurus Rexes are ranchers.

Speaking of ranchers, we were next to meet the three T-Rexes of the film: “Butch” the patriarch T-Rex played by Sam Elliot, and siblings “Nash” played by A.J. Buckley and “Ramsey” played by Anna Paquin who was hold a toy version of her character. They remarked how thrilled they were to be playing benevolent characters despite being T-Rexes. Amidst films like Jurassic Park, it was great to see Pixar turn the idea of the T-Rex upside down. These dinosaurs aren’t mindless killing machines, but instead are a family of cattle ranchers who live off the land. I was amazed by the fantastic interplay and sibling rivalry between Nash and Ramsey only to be told that all three actors recorded their dialogue separately. In fact, they spent more time that day doing press interviews than it did recording their dialogue! One thing was for certain, they all had such respect for Director Peter Sohn. His clarity and vision for the film got them all really excited and help them give their best performances.

The final interview was with Director Peter Sohn. Having never met or seen Peter before it was easy to see how he was the inspiration for young “Russell” in UP and why they chose to use his voice for “Emile” in Ratatouille and “Squishy” in Monsters University. He is gentle, kind, and soft-spoken with a clear passion for what he does. He began to explain that beyond this film being a ‘boy and his dog’ story, The Good Dinosaur is also about surviving the frontiers of the Pacific Northwest. He likened Arlo’s family to the one in the Disney classic Old Yeller. And when it comes to nature, it can provide, but can also be a great antagonist. One scene in particular that illuminates this point is when Arlo and Spot eat fermented fruit and have a ‘Pink Elephant’ moment. That scene came directly from the research Peter and his team did. Peter also explained how all the characters in the film represent an aspect of Arlo’s journey.  For example the Pet Collector, also voice by Peter, is meant to show what can happen if fear takes hold of you. Instead of facing his fears, the Pet Collector gathers up a myriad of critters to protect him. The moral being that neither fear nor Mother Nature can be beaten, but one can learn to survive through it.

We thank Peter for his time and conclude our interviews for the day. Upon leaving I take a quick photo in my own natural habitat: Hollywood with Arlo and Spot! 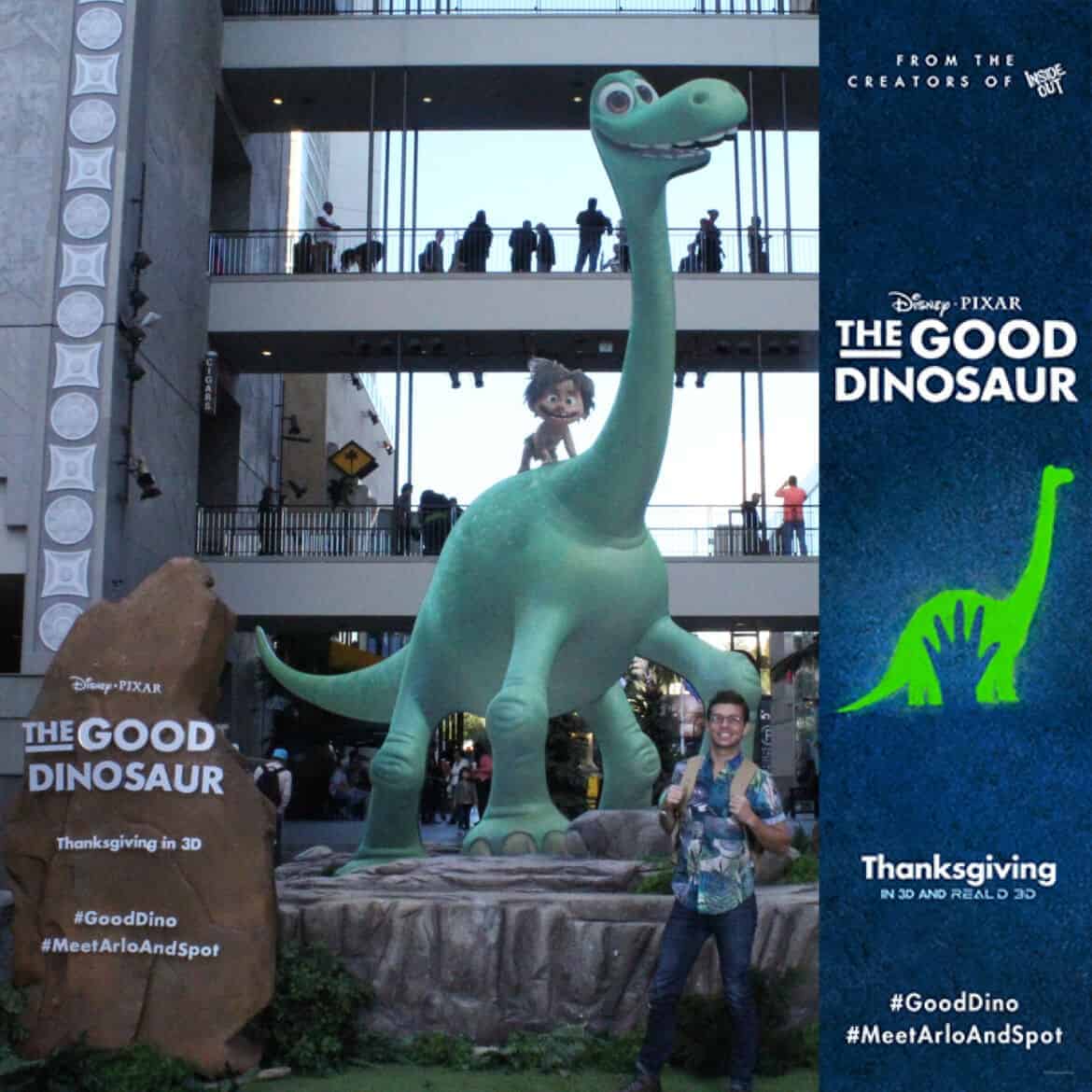 17 thoughts on “A Good Day with the Good Dinosaur”