This post brought to you by Hallmark Hall of Fame. The content and opinions expressed below are that of Surf and Sunshine.

Were you the little kid that brought home the poor rain-drenched kitten and asked, “Can I keep it?” While your parents may have tried to scare you off with big words like RESPONSIBILITY or HARD WORK you knew in your heart of hearts that you could care for that little creature you found defenseless and lost. If this sounds like you or maybe one of your own children, if your love of animals surpasses your sense of reasoning, Hallmark’s movie Away and Back is a movie for you.

Starring Jason Lee and Minka Kelly, Away and Back is a family movie that touches upon life’s difficult lessons and the miracles that inspire the good in people. Directed by Jeff Bleckner, he once again captures the magic and the growing pains that make up the foundation of every coming of age story.

When the little spitfire Frankie Peterson discovers a family of swans on her family’s property she is determined to be a witness to their incredible and beautiful journey. However, her father, Jack (Jason Lee), is than thrilled about his 10-year old daughter chasing after birds that are notoriously territorial. What starts as innocent curiosity turns into a journey of self discovery and growth as Frankie begins to identify with the signets (baby swans) after their mother dies. Reeling from the recent loss of her own mother, Frankie becomes determined to care for the little unhatched swans.

It is a rocky start to their relationship, but Ginny discovers the intense love that Frankie has for the swans, and Ginny begins to see herself in the young girl. Instead of pushing her to the side, Ginny includes Frankie in the growth and migration of the swans. Slowly, Ginny’s cold exterior melts and Frankie’s entire family welcomes the new maternal presence into their home.

Just as quickly as Ginny and Frankie bond, they are pulled apart when the baby swans must migrate. With their departure, Ginny will also have to leave. Jack is eager to protect Frankie from yet another devastating loss, and he pushes Ginny away from the family, but moving on is never as easy as it seems. Troubling news about the swans migration leaves Frankie eager to help, but puts her in potential danger. Ginny and Jack must join forces to save Frankie and the swans. 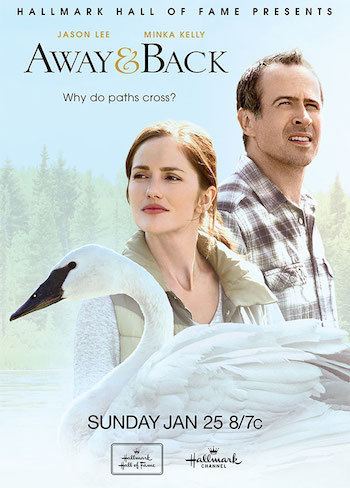 For over 60 years, Hallmark Hall of Fame has provided audiences with movies that will touch and inspire lives. Away and Back will not disappoint. Inspire your own family with this beautiful story. Visit Hallmark.com to purchase a copy for your own movie collection.

For more information and tidbits on the movie checkout Facebook. Share the movie trailer with your Facebook friends and you could win a free trip to a National Park or a location of your choice!

5 thoughts on “Away and Back – The Magic of Hallmark”