I love the holidays. My favorite time of year are the months between October and January. Between Halloween, Thanksgiving, Christmas, New Year and our anniversary I’m never feel more festive. I love the decorations, traditions, the music and of course the parties. My husband? He could care less! He doesn’t openly protest. He is there to hang the lights, adjust the wreath, set up and take down things just out of my reach but his motivation is pleasing his wife and not the festivities. So I often joke that my husband is a scrooge.

Despite what he may think of the holidays his stomach has a mind all it’s own. It started in October. I shudder at the dollars we spent on Apple Cider this season. It was going for well over $6 a gallon and he was putting away a gallon a week up until it disappeared from the shelves one week ago. Then there were pies, cookies, apple cider doughnuts and other goodies. No sooner did pumpkin pies disappear to be replaced by cherry and apple for the Christmas Season. Egg Nog has replaced the apple cider. A variety of treats like fudge, peanut brittle and all things covered in chocolate have replace the doughnuts. Even more interesting is that the scale doesn’t move even a half a pound past glorious 6 pack abs. It’s disgusting. 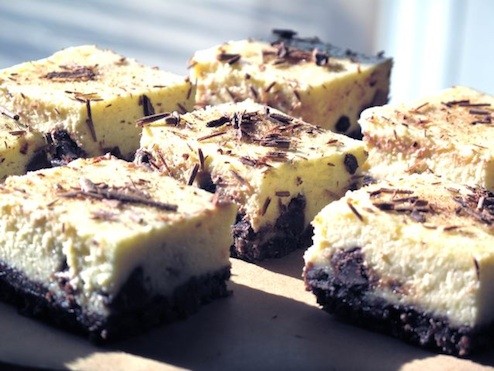 In my bitterness and expanding waist line I digress. I also enjoy the delectable goodies whose aroma fill our kitchen. Creating delicious treats this time of year is a tradition in our family and experimentation is encourage. I think these Brownie Brittle Eggnog Cheesecake Bars are an experiment in the epitome of holiday flavor. Regardless of how they came about, I know how they will leave – my husband will leave them without a crumb to even say they were there!

Thanks to Brownie Brittle for sending product samples and this fun recipe to try!