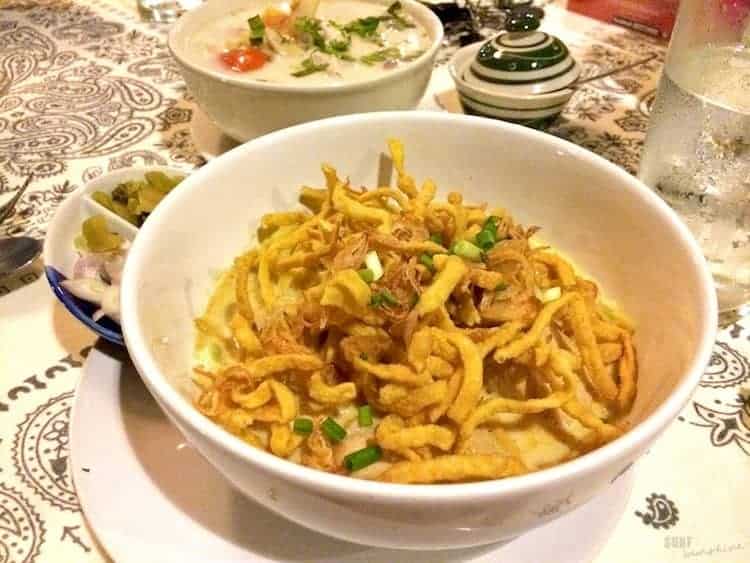 Originally a Burmese dish, Khao Soi literally means ‘cut rice’ in Thai. This refers to the way the dough for the rice noodles is steamed on a cloth over boiling water and then rolled and cut with scissors. Some street vendors and specialty noodles houses still use this method, but most Thai eateries now use egg noodles.

The funny thing about this dish is the fact that it’s base consists of coconut milk. If you know anything of Thailand’s climate you would know it’s not exactly conductive to growing coconut trees, yet the ingredient is widely used in many recipes. So how did Chiang Mai become so well known for it’s Khao Soi?

It’s believed that when Chinese Muslim traders from Yunnan traveled through trade routes along Burma, Thailand and Laos in the 19th centuries, a few of them settled in Chiang Mai. With them, they brought the traditional Burmese dish ohn-no-kyaukswe, a coconut milk-based noodle soup. They made this dish more friendly to the locals by adding heat with chilis and other traditional Thai flavors.

There are other theories as to it’s origins, but using a few entomology clues and given the fact that the dish can be so vastly different from one restaurant to the next – some offering meats such as pork or frog instead of chicken; others using traditional rice noodles; and still others varying the amount of heat and variety of spices – I found the theory of the dish originating from Burma and adapted for local Thai’s the most plausible explanation. You could order the dish from one place and find it nothing more than a coconut curry soup and turn around the next day and be completely intrigued by the flavors with each sip.

Ranging in price from 40 Thai Baht (just over $1 USD) to 170 Thai Baht (about $5.60 USD), you’ll find Khao Soi being sold in restaurants and also by numerous street vendors throughout Chiang Mai. I ordered this dish at every opportunity and found the most memorable tasting bowl being sold just outside Wat Phra Singh, under the street vendors’ red umbrellas. Simmering in large clay pots, the various layers of flavor and spice were completely unlike any other bowl I’d had and I was sorry I never made it back for seconds. 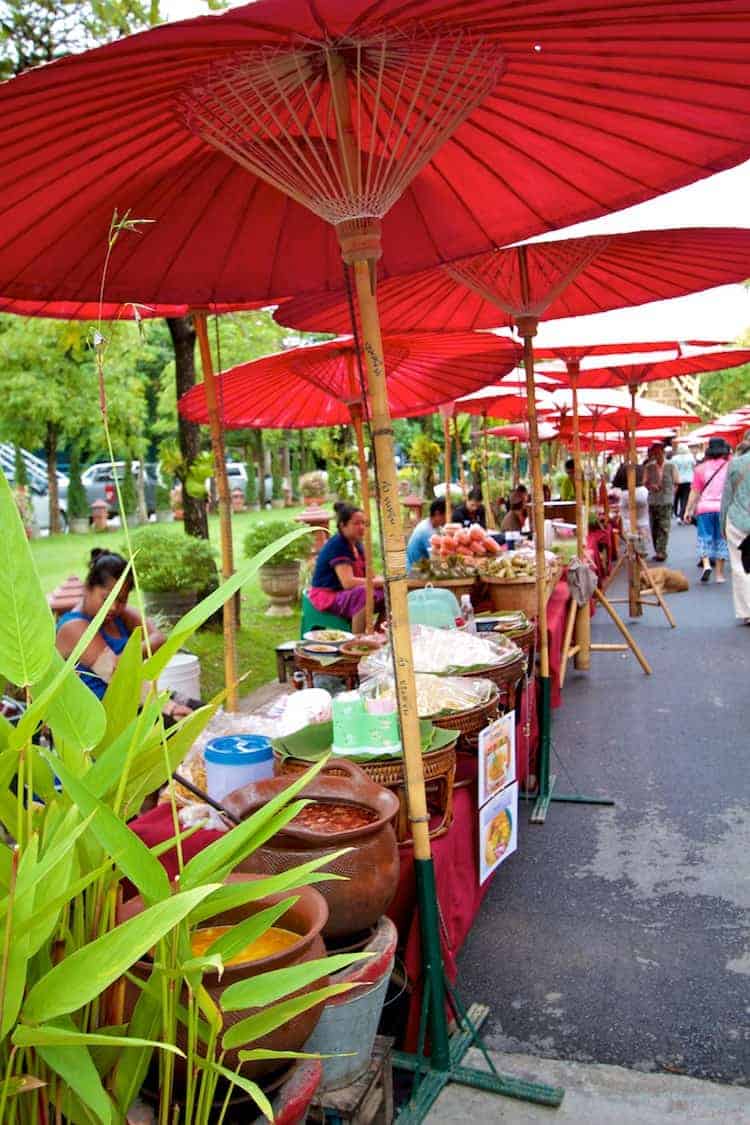 Determined to find another mouth watering bowl on my last evening in town, I wandered the Chiang Mai Night Market (Loi Kroh Road) in hopes of finding a street vender selling Khao Soi. Just a few blocks north of my hotel (Le Meridien Chiang Mai), I found the edible treasure I was looking for.

A veritable “hole in the wall” restaurant whose entire menu consisted of 4 soups, Khai Soi being menu item #1. I noticed the old woman carefully making noodles on a large chopping block and knew I had found my place. Not quite as magical as the bowl from the temple, this bowl came a close second in delighting my tastebuds. At only 40 Thai Baht (about $1.30 USD), I highly recommend you stop by to enjoy a bowl for yourself. From the corner of Chang Klan Road and Loi Kroh road, take Loi Kroh Road north about one and a half blocks. One the same side of the street as Starbucks, you’ll know you’re close once you pass 7/11.