De Palm Island, Aruba’s only family all-inclusive destination, has been in operation for more than 50 years and is a short 5 minute ferry ride from the mainland. While the island itself is pretty small, we quickly discovered that its big on family fun. 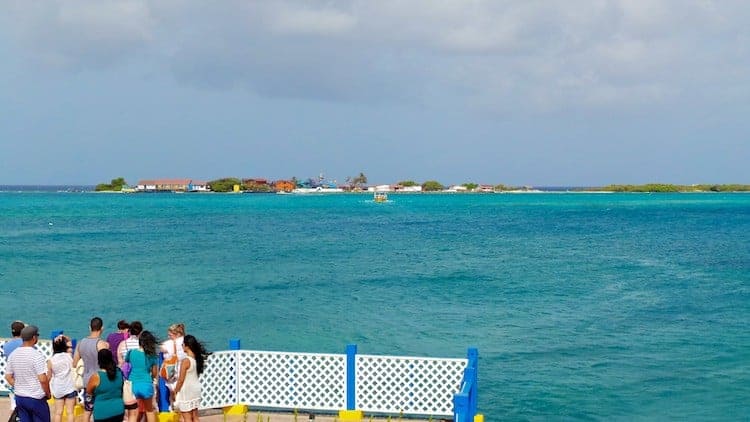 We started our morning with a convenient luxury bus pick-up from our hotel (the Aruba Marriott Resort and Stellaris Casino). We made a couple stops at a few more hotels along the way and arrived at the ferry landing about an hour later. After picking up our wristbands, we headed down to the dock to catch a ride to De Palm Island. I was actually surprised at how close it was and relieved that the boat ride wouldn’t be a long one.

Whistler and his new buddy, Zachary, could barely contain themselves with excitement. They both leapt off the boat and were talking non-stop about the Blue Parrot Waterpark that welcomed us to the island. After a short introduction and lay of the land by our host, Jonathan, we were let loose to explore De Palm Island as we pleased.

Of course we immediately headed straight to the waterpark. Although it wasn’t quite as large as I expected, the waterpark is a water feature playground area that has 6 slides that provide a little something for everyone. 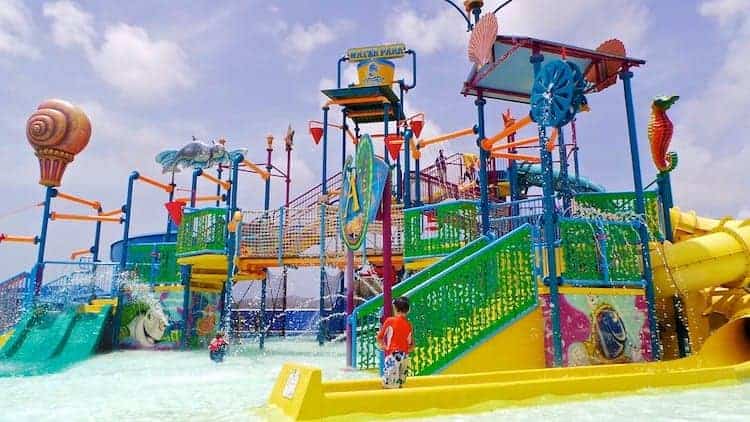 At first glance I thought this attraction wouldn’t be suited to a 38″ tall, 3.5 year old toddler that couldn’t yet swim. So I decided to first explore the area with Whistler and was pleasantly surprised to discover that he was able to enjoy the waterpark just fine. The general pool or wading areas of the park are about 18 inches deep and can easily be navigated by a toddler.

The two slides (green open slide on left and yellow enclosed side on the right) on either side are the “easy” level ones that I felt comfortable allowing him to go down alone. The other 4 slides can be entered on the higher levels of the park and are supervised by an employee. The tallest one was fairly steep and long – perfect for thrill seekers and adults. After taking a ride down a medium one with Whistler, I let him know which areas he was allowed to go into and those he was not. From there, he enjoyed the waterpark on his own.

Aside from the slides, the park has lots of interactive water features around every corner so it was easy to let a couple hours fly by before deciding to check out the snorkeling area. Just looking into the water you could see the beautiful blue parrot fish endemic to Aruba. Although the water was calm and pretty shallow, snorkeling just isn’t something Whistler can grasp yet so he longingly watched the others explore the reef. (Snorkel gear is provided) 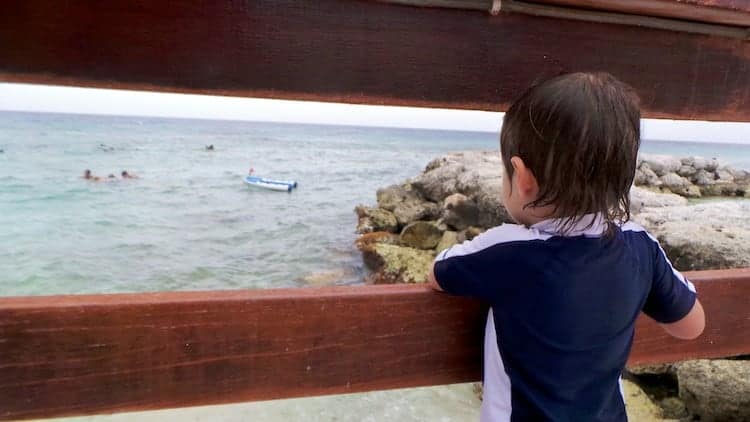 But I knew that this island is pretty much surrounded by reef so I had an idea. We walked over to one of the two protected cove beaches just to the right of the snorkel area instead.

We waded out to the area near the opening of the cove (the water is still much lower than waist deep here) and found a school of small silver fish swimming near the sea grass there. While I attempted to show Whistler these fish that were a few feet in front of us, he actually pointed out a friendly yellow fish that was swimming in between our legs that I hadn’t even noticed!

After searching for sea shells (this beach is LOADED with shells and corals), and watching the pelicans chit chat with the sea gulls, we followed our tummies to the over water all-you-can eat buffet restaurant. They offer both a breakfast and lunch selection of local and caribbean fare. They had a limited salad bar and a few warm options like BBQ Chicken or Ribs, rice, corn on the cob, and soup. 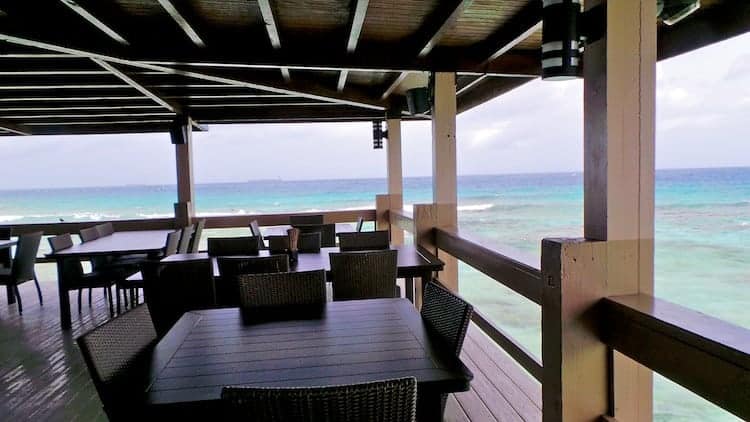 If you find yourself hungry and can’t seem to pull yourself away from the full bar (for a tropical drink, try the Sniper!) there is a snack bar located near by offering kid friendly food like hamburgers, hot dogs, fries and chicken tenders. There is also a kids activity area here where Whistler snuck in a little art time while I ordered a complimentary cocktail. (While not mandatory, tips are a great way to thank the friendly staff for their great service). 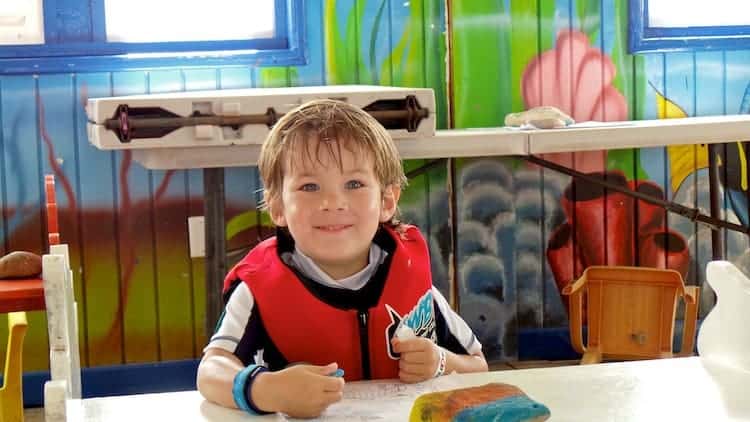 As we were just about to head back over to the waterpark for round two, we ran across a beautiful type of lizard that we have never seen before. The Aruban whiptail lizard (or Kododo blauw) is bright turquoise all over, with stunning spots and had Whistler squealing in delight at the animal encounter…And the races were on!

These beautiful creatures were everywhere we looked and fun to inspect. No two looked exactly alike – some brighter and bigger than others. As we were following one, we heard the music start for the daily Salsa Lesson. If there is one thing that Whistler loves more than animals, it’s dancing. When he saw the guests line up for instructions, he quickly forgot the lizards and joined the lesson. 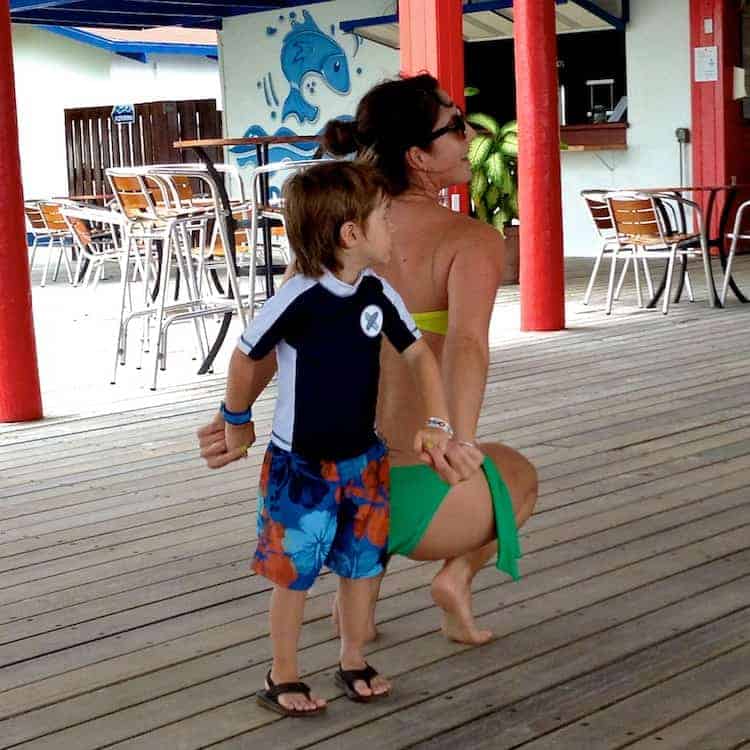 After learning a few moves, he showed off his moves with the lady of his choice, Lisa.

Just as we were packing up to head home, another friendly critter showed up to say goodbye.

Any time I get a “that was AWESOME!” and a hug and kiss like this from my 3 year old, I can pretty much file that day away as a success. And I’m pretty sure we weren’t the only ones! 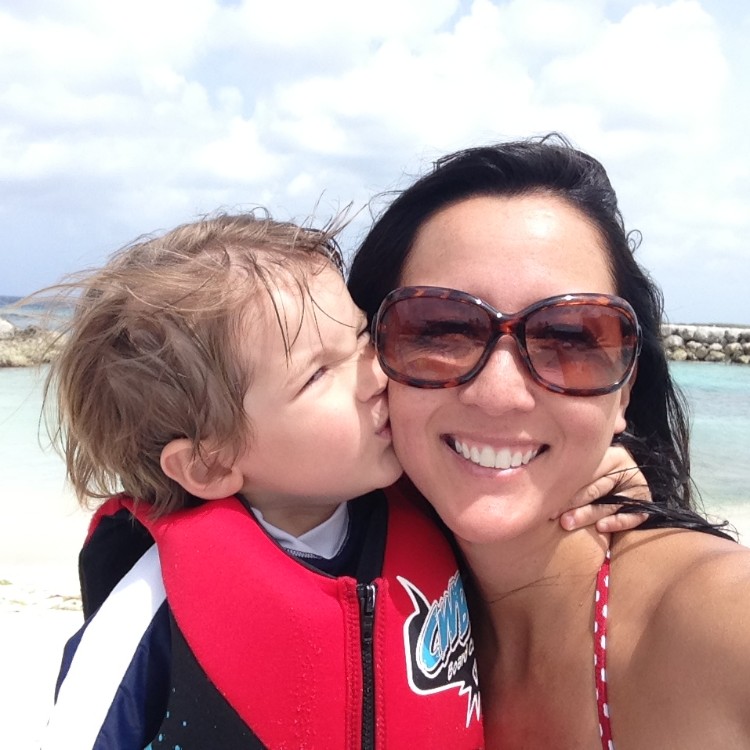 Note: For additional fees you can ride a banana boat, go snuba diving, explore the sea with the sea trek underwater helmet walk (available in Aruba only at DePalm Island), or enjoy a massage right on the beach.