Wonder how a animated film is created? On a recent press trip provided by 20th Century Fox and DreamWorks Animation a group of bloggers were invited to learn about the process. We started with a guided tour around the DreamWorks Animation Studio to learn more about the making of the film The Croods. The picture above was taken in the DreamWorks Hall of Fame. We are looking at a photograph of Nick Nolte trying to figure out exactly who he was.

The DreamWorks animation campus has several water fountains, ponds, and streams to help nurture the creative vibe while providing passive stress relief. Breakfast and lunch are provided for the employees every day. I saw evidence of a caring and health conscious company. Exercise groups and weight watcher support groups all had flyers posted. Discounts are given at health clubs and yoga classes are held right on campus. They created long, winding S-shaped walkways so the 1600-1800 employees won’t feel rushed.

Our tour concluded at the Animation 101 presentation provided by Rick Clifton and Brennan Foti. We learned how it takes three to five years to make an animated movie. To break that down and boggle your mind, it takes three weeks to make just 2 second of film. That is patience I cannot even begin to comprehend. Hundreds of artists come together to make an animated film which is probably why the feel of the campus is so intentionally serene. 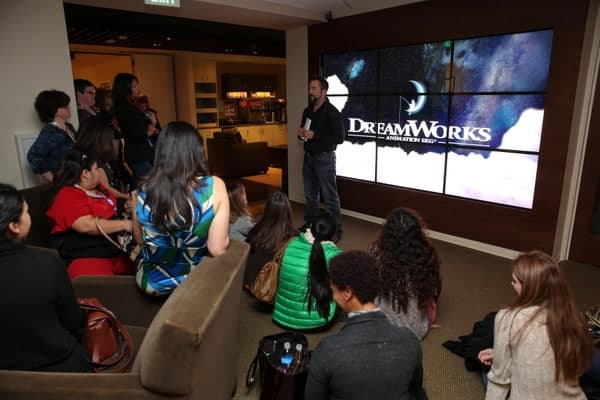 Improv is an important part of the animation process. Much of the actor’s improv is worked into the film, and sometimes characters, like Eep in The Croods, are completely designed around facial expressions and mannerisms of the voice actor. Emma Stone, the voice of Eep, has such expressive smiles, frowns and quirky things she does with her mouth. We later learned that the supervising animator, Lena Anderson was reviewing a lot of Emma Stone footage when she noticed Emma’s incredible mouth shape. James Baxter, head of character animation, explains, “She’s so expressive when she talks that she (Anderson) had all these pictures of Emma up on her walls and just the weird things that she does.”

Connect With The Croods

THE CROODS is a 3D comedy adventure starring the voices of Nicolas Cage, Emma Stone, Ryan Reynolds, Catherine Keener, Clark Duke and Cloris Leachman. This DreamWorks Animation film follows the world’s first modern family as they embark on a journey of a lifetime after the only home they’ve ever known is destroyed. Traveling across a spectacular landscape, The Croods are rocked by generational clashes and seismic shifts as they discover an incredible new world filled with fantastic creatures. Wouldn’t you imagine that their outlook on life is changed forever. The Croods hits theaters March 22, 2013.

Go ahead and take a peek at The Croods trailer below. Learn about the first family!

I was invited on a press trip provided by 20th Century Fox and DreamWorks Animation. My travel expenses were covered. All opinions are original.