Before becoming a parent, I often heard and took terms like “boys will be boys” and “that’s just what little boys do” at face value – essentially predisposing you to believe that little boys all behave a certain way. Consciously you know this isn’t the case, that all humans are unique and different. That while little boys share many common characteristics, no two boys are truly the same. Yet subconsciously, you start to believe it. We start to lump boys together based on their common characteristics – the need for dirt and roughness, the penchant to walk just slightly over on the naughty side of the line, and the boundless energy they exhibit. Then you become a parent and you realize that there is no little boy in the world quite like yours. 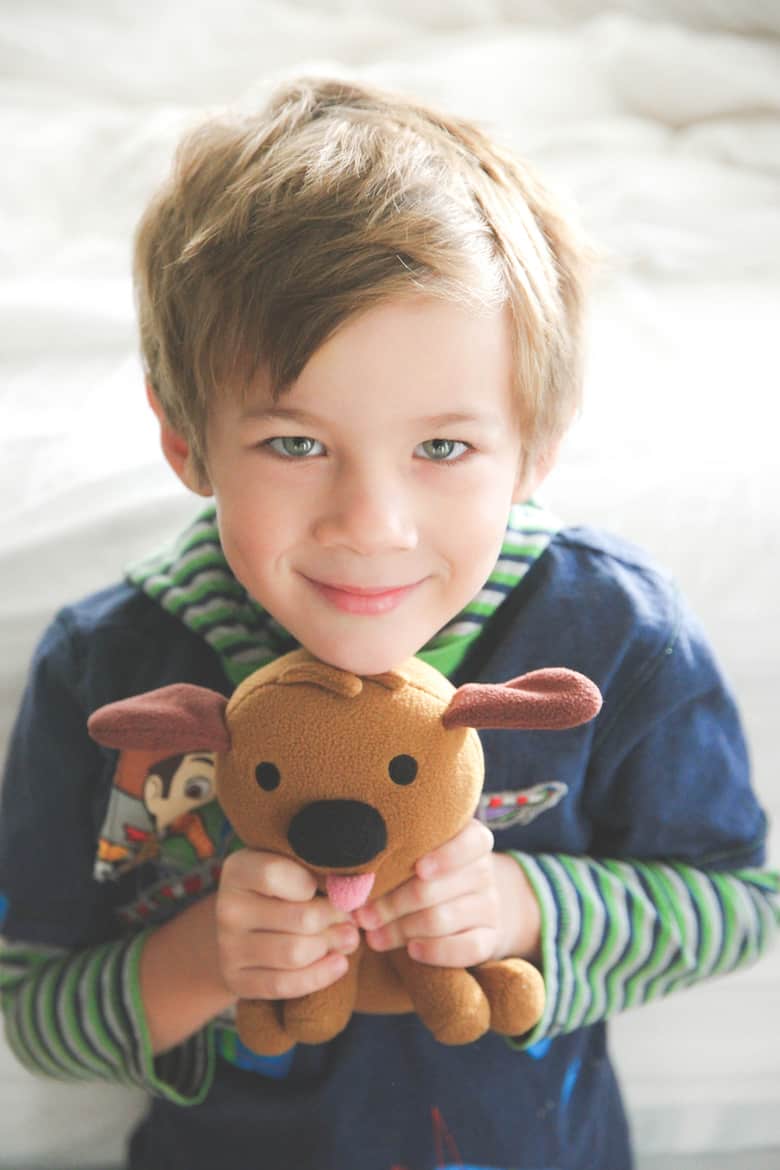 Sometimes, the little boy you’re blessed with may be even further outside the spectrum of “boys will be boys” and there is nothing better, or more terrifying, than watching your child live their life outside the lines. Because as you rally around the beautiful spirit they contain, you also worry that they are not what society expects of them. We worry of the friction that comes when expectations are different than reality. This friction keeps moms up at night, wondering how their child is going to deal with trying to fit in while still remaining true to who they are. This is the story of moms everywhere – moms of boys and girls alike – and essentially, it is also the story of Ferdinand the Bull.

The Story of Ferdinand is the best-known work written by American author Munro Leaf and illustrated by Robert Lawson. It’s been celebrated by the likes of Ghandi, Eleanor Roosevelt, and H.G. Wells.  The children’s book tells the story of a bull who would rather smell flowers than fight in bullfights.

Young Ferdinand does not enjoy butting heads with other young bulls, preferring instead to lie under a tree smelling the flowers. His mother, concerned that he might be lonely, at first persuades him to play with the other calves, but when she sees that Ferdinand is content as he is, she leaves him alone.

When the calves grow up, Ferdinand turns out to be the largest and strongest of the young bulls. While the other young bulls dream of being chosen for the bull fights, Ferdinand is more than content to continue smelling the flowers instead. Unfortunately, after series of unlikely events, Ferdinand is mistaken for a dangerous beast and torn from his home. Determined to return to his family, he rallies a misfit team on the ultimate adventure. Set in Spain, Ferdinand proves you can’t judge a bull by its cover.

It’s because of this story that I found myself sitting down for a chat in living room with a group of fellow bloggers with John Cena, the voice of Ferdinand, in this new animated adaptation of this classic children’s story. By the end of our interview, it was apparent that there really was no one better fit to play Ferdinand.

How did the whole thing start? How did you get involved?

Mr. John Cena: At first they wanted me for a different part. But scheduling has been tough because I say yes to everything and then figure it all out, because I have a very good perspective of the fact that I live with a dream job. And when opportunities come up that I like, I just say, “you know what? I’ll find more time in the day, but this is something I like and I want to try to do it.”

Unfortunately, the guy who’s kind of in charge of all my time, the weird guy in the gray suit, not me, he said, “You don’t have time to do this.” And we kind of just left it at that. But then the folks at Blue Sky and Fox came back and were like, “Well, we’ve re-circled our wagons, and we would like John to be Ferdinand.”

And then I was like, “Man, you are stupid if you pass on this,” not only because it’s such a great opportunity but it’s just a powerful story. And in every aspect of it, I am Ferdinand.

I’m the guy that can’t walk out onto a stage without them trying to blow something up or everybody on the street challenging me to a wrestling match, it’s just because of what they see and it’s what I am perceived as. And there is a typecasting that goes with what we do, but I’m a human being. I’m a different guy than what you see.

I just couldn’t think of a better way to kind of tell my story through their story, and at least at the best I could do it. I’m like, “I get this, and I’ll be able to nail this.”

So, what are you hoping families walk away with after watching the film?

Mr. John Cena: First of all, I hope they see a great movie, because I really think it’s just a fun ride. And it’s got all the entertainment of those animated movies that adults have to pleasantly watch 2,000 times. Like, “Oh, we got to see it again.” But I think it’s going to be one of those movies that you don’t mind seeing again.

And the thing that I find the most powerful, and I hate to shove moral fiber down people’s throats, but when you can tell a story and take people on a fun ride and also leave them walking away with something, give them a little bit to think about. It’s a great, famous tale about, there’s more than meets the eye. You don’t judge a book by its cover.

And nowadays, with us empowering individuals to just be you, I did a wonderful campaign with Crocs that’s just about to go everywhere called Come As You Are. And it just empowers people. My character in WWE is both loved and viscerally hated. Because I’m such a goody two shoes, there’s a portion of our audience, mainly the adults, that want me to just turn bad.
But I won’t, because I come as I am. I wear my jean shorts proud. I wear my ball cap and my wristbands, and they hate me for it. But there’s also people that can resonate with that, like, “Man, this guy says never give up.” And I believe in that.

So, that attracted the brand to me. And it’s the same with this movie. You have this big, enormous, soft hearted, loving individual who, if you just look at him, you’d be like, “All right, don’t want to pick a fight with him at the end of the bar.” But it’s so much more than don’t let yourself go there. Don’t just become that because that’s what people perceive you as.

And nowadays, like I said, we just empower individuals to just be who you are. You don’t have to be this way or this way or this way, or just because people see you a certain way doesn’t mean you have to be a certain way.
So, that I like, especially with certainly young, impressionable people. Ferdinand knows who he is the whole time. But also with his influence, he takes a group of eclectic folks and lets them see, like, “Wow, there’s more to life than what people just may see me as.” I hope they take that away from it.

What was your favorite scene?

Mr. John Cena: I literally am a softie. So, there’s a scene where Ferdinand gets taken away from his family, which is tough but awesome. When the fighting bulls finally are like, “No, we’re going to fight”–like, that heroic moment of like, “We’re in this fight, let’s go for it,” when they decide to change their life, that’s a great moment.

When Ferdinand finds out that the entire structure of what the bulls believe in isn’t really what it seems, they just believe it because they’re told to believe it.  But, I’m a sucker, man. I’m the person that if the commercial’s good I get teary-eyed. There’s a lot of those moments in there. Where you have got to be like, “I’m good. I’m all right.”

From the creators of Rio and Ice Age. See Ferdinand in theaters this Christmas.

FERDINAND tells the story of a giant bull with a big heart. After being mistaken for a dangerous beast, he is captured and torn from his home. Determined to return to his family, he rallies a misfit team on the ultimate adventure. Set in Spain, Ferdinand proves you can’t judge a bull by its cover.

From Blue Sky Studios and Carlos Saldanha, the director of “Rio” and inspired by the beloved book “The Story of Ferdinand” by Munro Leaf and Robert Lawson, “Ferdinand” is a heartwarming animated comedy adventure with an all-star cast that includes John Cena, Kate McKinnon, Gina Rodriguez, Anthony Anderson and many more.

10 thoughts on “Ferdinand the Bull: Don’t Be Afraid to Just Be You”