Within Kia’s surprise department lies the perfect way to complete a ‘Day at the Races’ at SEMA. Beer.

A vehicle designed for today’s active lifestyles with more power than the previous Sedona, a longer wheelbase for improved leg room and unique seating configurations, including available ‘First Class’ second-row seats. Combined with intuitive technology and safety, the Sedona brings new levels of sophistication to a segment that’s been filled with bland and predictable practicality.

Kia partnered with L&G Enterprises to design and build a beer truck for Ballast Point brewery from the 2015 Kia Sedona. LGE took out the front passenger seat for extra storage; took off doors and part of the roof, added a wood bar that folds up and out, made room for three 15 gallon kegs (yes, three), a jockey box, beer taps, and 70 feet of copper line for cooling the beer. Complete the look with some really cool graphics, and now Ballast Point is ready to serve up some brews on the go with a knockout new beer truck featuring Ballast Point Pale Ale (the beer that started Ballast Point) and Sculpin IPA. 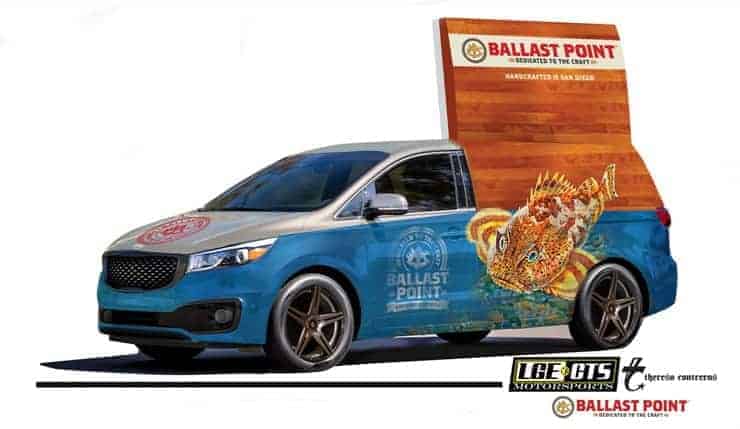 What’s a beer truck without a great beer story?

While in college, Jack White decided to try his hand at making beers. Specifically, ones that were better then those he could find in the stores or at keg parties. He developed a talent for home brewing and soon realized it wasn’t easy to get a hold of the various supplies and ingredients he needed. In 1992, Jack opened Home Brew Mart, which he filled with the supplies, ingredients, and conversation every brewer needed to make better beer at home.

Soon he met a fellow home brewer Yuseff Cherney and together, they decided to open a “back room” brewery out of Home Brew Mart, thus in 1996, Ballast Point Brewing & Spirits was born.

Today, they have four locations in the San Diego area with a huge 107,000 square foot brewery/restaurant/office/retail complex opening soon in the Miramar neighborhood. This will provide them with an opportunity to quadruple their production over time. Jack and Yuseff’s philosophy has always been “doing what [they] love, and making what [they] love to drink”.

They both love to fish, almost as much as brewing which is reflected in many of the beers (which there are over 40) being named for fish or fishing terms, serving as a reminder to always do what you love. Even the Ballast Point logo has a nautical theme, the sextant; “it is a reminder for them to keep on their journey, continuing to seek out new ideas, new flavors, and new people to share their beer with.”

Creating two unique builds using a Soul EV and a Sedona, Kia continues with “the power to surprise” by being innovative and continuing to push the envelope. Be prepared for more surprises yet to come during Kia’s “A Day at the Races” at SEMA. See ya’ll there!