During a heartfelt mom-to-mom conversation on a Friday morning, Kristen Bell replayed for me a story that sounded more like a movie plot than real life. A story of her friends Fergie and Josh Duhamel, who were involuntarily surrounded inside their own home by countless prying photographers who had camped out in front of their house back in September 2013, all hoping to snap the first picture of their newborn, Axl. A time that was meant to be blissful and shared with loved ones was tainted, if only temporarily, knowing that the hunt was on by multiple photography agencies aiming to make money off their first child. Feeling threatened, angry, and desiring to be left alone, Duhamel posted a picture of Axl to his Twitter page, in order to disperse the media frenzy outside. Captioning the image with the hashtag #paparazziyoucanleaveourhousenow, multiple online entertainment sources published the first look but very few included the hashtag, providing voluntary oversight into the sad reality that has been created due to the public’s desire to have an instantaneous look into celebrities personal lives and their growing families. 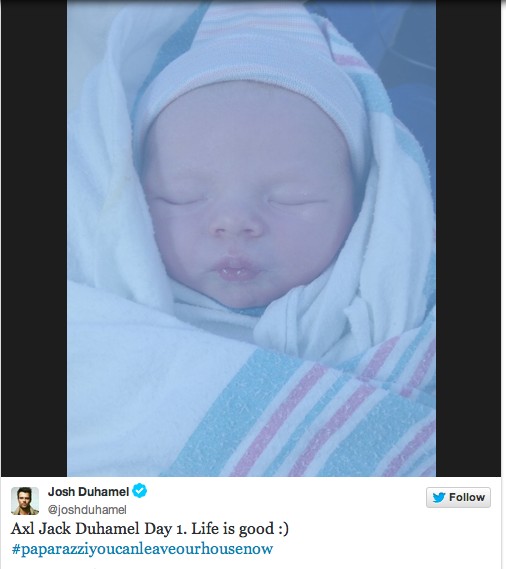 The stories are endless, and Kristen Bell passionately described one situation after another in which her family and others were subject to extreme media scrutiny after having a baby. Bell and her husband, Dax Shepard, welcomed their first child on March 28th, 2013 and have had a car or two parked across the street from their house waiting at all times for them to leave, hoping to get a picture of their daughter since the moment they brought her home from the hospital. In an article published by the Huffington Post, Shepard recounts the pain he encountered the first time pictures had been published of their daughter, clear as day after a play date in the San Fernando Valley.

“I personally believe, and I understand a lot of people differ on this point, that protecting (our daughter) includes keeping her life private until the moment she decides otherwise. I think she is entitled to that. I think every minor is entitled to that. My wife and I, ever the approval-junkies, made a decision to get into show business and become public figures, but she has not. She hasn’t even decided if she prefers pureed carrots to peanut butter.”

While Shepard, who frequently goes to great lengths to cover his daughter from the lenses, was unaware of the paparazzi in that particular instance, most run in’s with the tabloid photographers are more announced. Screaming, shouting, invading personal space and bringing up hurtful comments are all part of the daily means paparazzi take in order to capture a ‘good picture.’

“While I wholeheartedly support the first amendment, I don’t believe in the right to be an asshole,” Bell proclaimed. “It’s not the end of the world, it’s not genocide, but it’s not right. Children are not meant to be consumed.”

The fine line between the rights of the press for news gathering means, and protecting children’s safety has become an increasingly grey area in the entertainment world that often goes unnoticed by mass consumers. “Pictures that may make it into a magazine could very well show someone smiling in an image with their family, but they don’t know the truths behind the picture. There are many instances where parents are harassed by photographers, where they say ‘let us have three shots and then we’ll leave you alone.’ While I personally don’t agree to them as I see it as blackmail and almost cooperating with the mafia, it makes me sick that some people have to choose between grocery shopping with their daughter in peace by allowing a few pictures, or getting harassed all day by strange, grown men.”

There was pain in her voice, but also determination as Kristen Bell was not one to take this harassment lightly. Realizing that while they couldn’t wait and hope for the paparazzi, or pedorazzi as she preferred to address them as, to change their ways, there was a route for them to have more control over the situation. “It occurred to Dax and myself that it would make sense to take on the demand side rather than the supply. By letting consumers see behind the scenes of what children are subject to, we want to make more informed customers and hope that they choose to not give business to companies that support this harassment.” 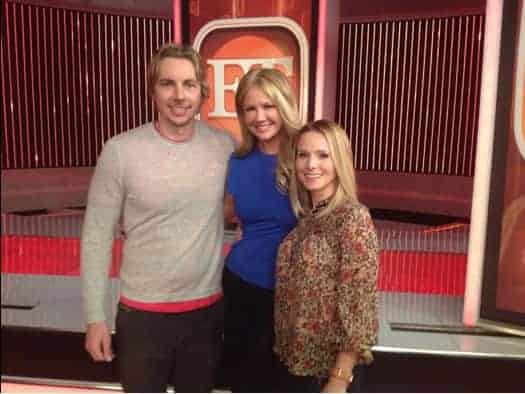 The plan to take on the demand side came in the form of the hashtag #nokidspolicy and it’s picking up steam in Hollywood. Put simply, Kristen, Dax and others in the entertainment industry have decided to boycott outlets that haven’t agreed to the No Kids Policy, and continue to post nonconsensual pictures of celebrity minors. Through refusing interviews to companies that post nonconsensual images of minors, and ‘rewarding’ outlets that do have the policy, they’re hoping the demand for celebrity baby pictures will reduce greatly if not diminish completely.

“I’ve gone around doing meetings with outlets that will meet with me and so far the response has been mostly positive. OMG Insider has a No Kids Policy, ET took a little convincing but not much, and now just this morning it looks like E! will consider joining the movement as well. It’s exciting.”

The movement has garnered so much attention, that since talking with Kristen, multiple other outlets including Just Jared, the ‘Today’ show, and People magazine have all agreed to join the fight against the paparazzi with the No Kids Policy.

Under the movement, pictures at red carpet events, public events, new baby photos that parents approve and tweets or Instagrams taken by mom or dad will still be fine to publish by those supporting the policy, as well as images of a child if they’re a public figure (i.e. Jaden or Willow Smith), but beyond that they hope that children will be off limits.

“We have a list of friends in the industry both who have children and those who don’t that are a lot more famous than us and have much more to lose, and they’re willing to help fight this battle with us,” Bell proudly stated,

The list is full of A list stars with an enormous level of influence that publications simply can’t afford to lose good graces with. While, many outlets may be doing the No Kids Policy for the right reasons, with their livelihood depending on staying on the good side of celebrities, it’s safe to say that many publications are doing it for business rather than ethics. Outlets that depend on having personal glimpses into celebrity personal lives, such as TMZ and Perez Hilton are less likely to follow the movement, but that doesn’t mean progress will not occur into protecting these children’s rights.

“I’ll be the first one to say that what I do is very easy, (actors) are overpaid, and I did sign up to be a parent, but I’ll be a parent before I’m an actor and I’ll fight for my daughter’s right to privacy even if that means I need to step away from this job that I’m blessed to have. I hope it doesn’t come to that, but babies are not news. My daughter’s outfit at the park shouldn’t have to be judged. Take pictures of myself and Dax, that’s fine, but when I’m with my child at the park or driving to a doctor’s appointment, my daughter like other children shouldn’t be afraid that someone’s trying to kill them for a picture.”

Through the No Kid’s Policy, Kristen and Dax hope to spread information about the perils ‘pedorazzi’ place on families, and make more informed consumers who can choose to support magazines and tabloids that refuse to place children’s well-beings at risk. “By shedding light on what these children are going through, we hope that how these children’s lives are affected can change for the better. That’s the bottom line, and these children deserve that respect.”

A huge thank you to Kristen Bell for inviting us to chat about this very important movement/issue. We whole heartedly support this cause and hope you will make the small changes to do so as well. All opinions remain our own!