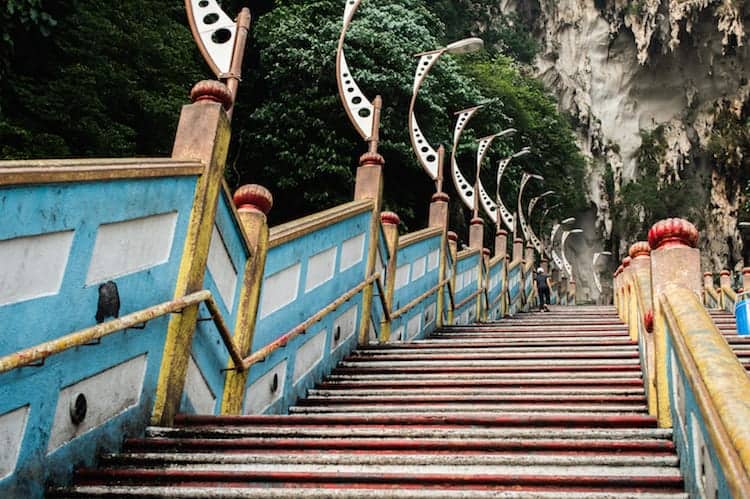 Standing at the base of the stairs and looking up 272 steps, I stared at the opening of a cave system said to be close to 400 million years old. Originally the Batu Caves were used as shelters by the indigenous Temuan people. It’s name derives from the Sungai Batu or Batu River, which flows past the hill and it shares the name with the neighboring town. Today the Batu Caves are home to one of the most popular Hindu shrines outside of India and is dedicated to Lord Murugan. 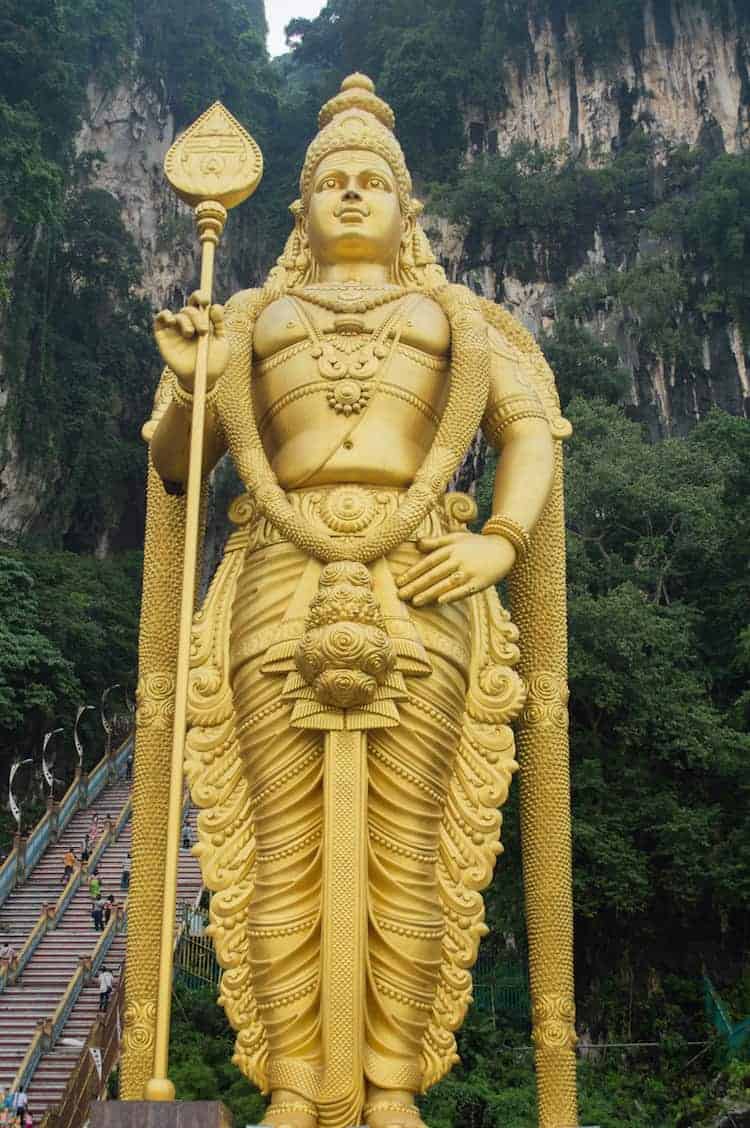 The cave became known as a place of worship by K. Thamboosamy Pillai, an Indian trader. He was inspired by the Vel shaped entrance and thus dedicated the temple to Lord Murugan.

Vel, as a symbol of divinity, is an object of worship in the temples dedicated to Murugan. It sits atop Murugan’s spear.

Eventually, in 1892, the first Thaipusam festival was celebrated at the caves and it now serves as a pilgrimage site not only for Malaysian Hindus, but Hindus worldwide, from countries such as India, Australia and Singapore. The yearly celebration occurs in the Tamil month of Thai (which falls in late January/early February).

After visually taking in it’s grand staircase, I began my ascent. Sweat pooled at the nape of my neck and the humidity felt like a cloak – 272 steps in the humidity of Malaysia is not the same as 272 steps in Michigan, USA. Luckily, the perfect excuse for a break photography opportunity was awaiting me at the first landing. 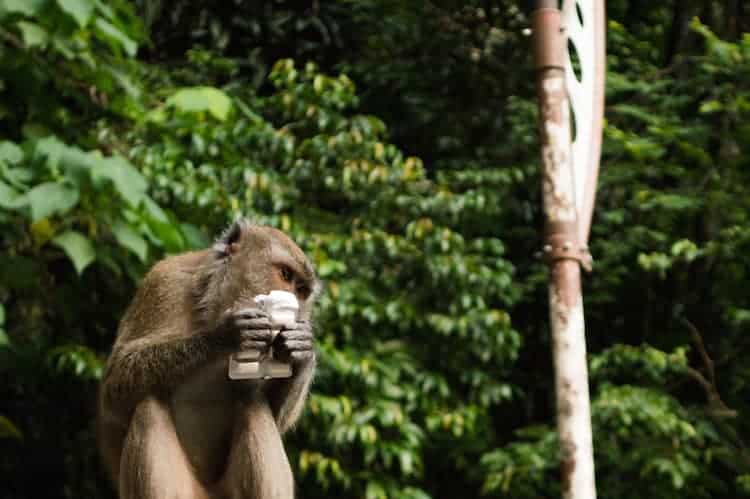 A popular spot for both human and macaque visitors alike, we were warned not to feed them or carry anything resembling food as they can be quite territorial. However, a woman descending the stairs obviously didn’t heed the memo because I watched one of these cheeky little guys snatch a package of gum from her hand in what I can only describe as an acrobatic feat as he vaulted from one side of the stairs to the other. 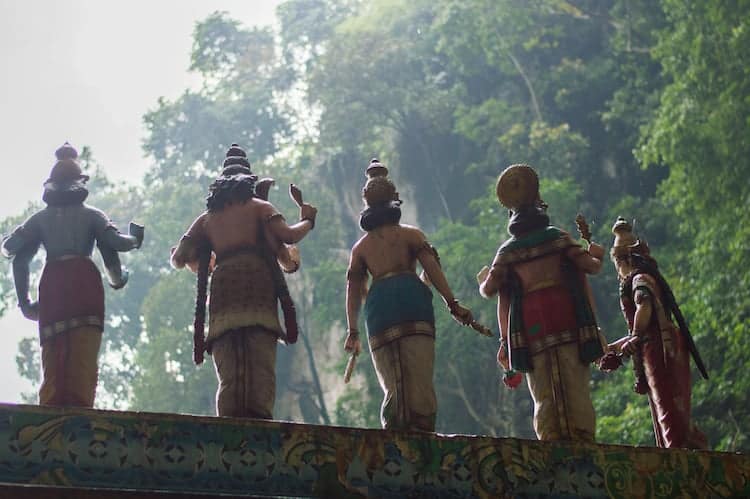 After a few more photography breaks, I triumphantly reached the top. The smell of rank, rotting food assaulted my nose as if it had been tweaked hard. Lurking within that scent was a definite muskiness that only a damp, dark cave system could lend. Thankfully, the human olfactory tends to be pretty good at adapting to prolonged exposure to assaulting smells. Soon, I was feeling a little less nauseated, albeit puzzled.

As someone who has always found religious grounds to be sacred in the sense it that, even if old, it should be kept immaculately clean it, was unnerving to encounter the filth I found within the caves. It was incredibly hard for me to merge the obviously “lived in” state of the caves with everything I knew about religious sacridity.  I decided to set my personal feelings aside and venture further into the cave. 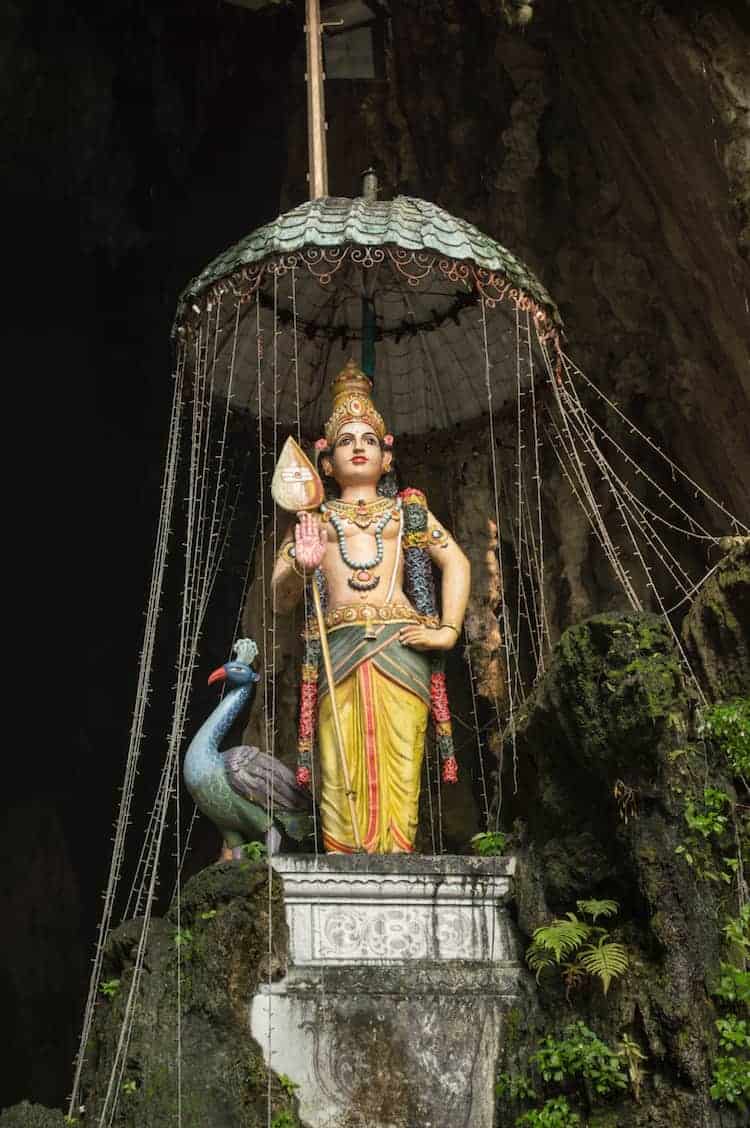 As I proceeded along, there were a number of carvings, sculptures and motifs. According to the Hindu religion, these are designed to take the worshipper away from reality toward the dreamy state. Generally, temples are kept darker and are suggestive of sleep-like conditions.

I found all of this to be true at the worshipping site, but what I also found was that Hindu’s simply come to worship at the shrine. They haul with them cooking tools, totes of food and garbage bags of paper products.

And the smell is explained, but it must all be taken in context. I was the interloper here. There is no fee to see this part of the Batu Caves, because it isn’t for tourists, it’s a temple that is actively used by practicing Hindu’s. They eat here and they pray here. Worship, love and food.