A storm is coming. I’m not talking about the one on the hidden Imperial base planet of Eadu. War is on the horizon. The rebel alliance has had enough, and they are determined to stop the Imperial Empire at any cost. Such is the setting and tone of “Rogue One: A Star Wars Story”.

This is not your dad’s Star Wars movie. It is gritty, it is turbulent, it is very real. It is a war movie where ordinary people do extraordinary things. The first of several stand alone films that expand the Star Wars universe, it is a step away from the saga films we all know and love, but it does not isolate itself. “We’re the first one out, so knowing these films could be different was exciting, but how different was the big question and what does that mean,” says the director, Gareth Edwards. “I love Star Wars. I grew up with the original trilogy and to me they’re the ultimate movies. I feel that a massive upside to not being a part of the saga is we have a license to be different. And hopefully we took that license and ran with it.”

Edwards wanted to make his film feel more grounded in reality and to give “Rogue One” a sense of gritty realism. “What I wanted to do was to make ‘Rogue One’ more natural, more realistic and a little more organic; to make it feel like a real world,” the director explains. Edwards continues, “We’re going for realism and naturalness to the environments and performances and characters we meet. It’s also that we’re part of the original films in terms of where our characters are. It had to marry to the films I grew up with. And, there’s a classical style to those, which is very considered and stable.” It is key to note that while “Rogue One” is very much its own film, it is still heavily rooted in the Star Wars universe. As producer, Simon Emanuel noted, “Gareth is all about intimacy and realism. He has a very documentary-led style, where he really wants the audience to be in there, but equally one of the things that was important to Gareth was that you should be able to watch ‘Rogue One’ and then go straight into A New Hope. Aesthetically it should feel the same; it shouldn’t jar.”

Fans will be excited to see some familiar faces, yet enamored with the new characters they meet. Academy Award®-nominee Felicity Jones lends her acting skills to the protagonist, Jyn Erso, an impetuous, defiant young woman who lends her skills to the Rebel Alliance and undertakes a desperate mission. Continuing with a tradition started by George Lucas with Princess Leia and then continued with J.J. Abrams with Rey, “Rogue One” once again places a strong, loyal and fiercely determined woman as the main protagonist of the story. Jones comments on playing the female lead, “The thing about Jyn is that everyone should relate to her. It doesn’t matter whether she’s female or male. She’s not just tough, like all human beings she can also be vulnerable.”

Other noteworthy performances are by Donnie Yen who plays Chirrut Îmwe, the blind monk whom Jyn first encounters when she and Cassian arrive in Jedha. However, although without sight, Chirrut is anything but unseeing. In a time when the Force is all but forgotten and the few remaining Jedi are in hiding, Chirrut is a lone voice who still believes. “Chirrut is a true believer in the Force, and he preaches this,” Yen says. “Throughout the whole film, he encourages and motivates his team members to have faith and continue to believe in the Force.”

“Rogue One” has its own creative and uniquely designed droid—K-2SO, a reprogrammed Imperial security guard now loyal to the Alliance. The 7’1” K-2SO is played by Alan Tudyk, who brings his sense of comedic timing and presence to the task of bringing the droid to life via motion capture. This is no Jar Jar Binks though. As director, Gareth Edwards, says, “We didn’t want K-2 just to be the comic relief. There is something slightly tragic about him trying to find his place in the world. There are moments of fun, but Alan gives him a soul.”

To play the role of Saw Gerrera, an extremist rebel who will not hesitate to kill the innocent for what he believes to be the greater good, Edwards looked no further than Academy Award®-winner Forest Whitaker. Whitaker says of his character, “Saw is very clear about what he believes. He crosses lines, human rights lines. He’s willing to do things he thinks are necessary in order to save the people and to free them from the bondage and slavery of the Empire.”

“Rogue One; A Star Wars Story” is a fantastic film. It is the perfect combination of new and old, familiar and fresh. It is dramatic. It is fun. It is exciting. It is Star Wars. When Lucasfilm president and Star Wars producer Kathleen Kennedy first sat down with George Lucas, he outlined his plans to continue with the Star Wars saga and to make Episodes VII, VIII and IX. Then he revealed another ambition. “George was excited, not only about doing more Saga films, but also about the potential of doing standalone stories that lived and breathed inside the Star Wars universe.” Walt Disney and Lucasfilm have done just that. The theme throughout “Rogue One” is hope, and the film provides just that. It gives hope that the standalone films will only serve to enrich the Star Wars legacy and not detract from it.  If it is any inclination of the standalone films yet to come, I will be the first in line to see those as well. 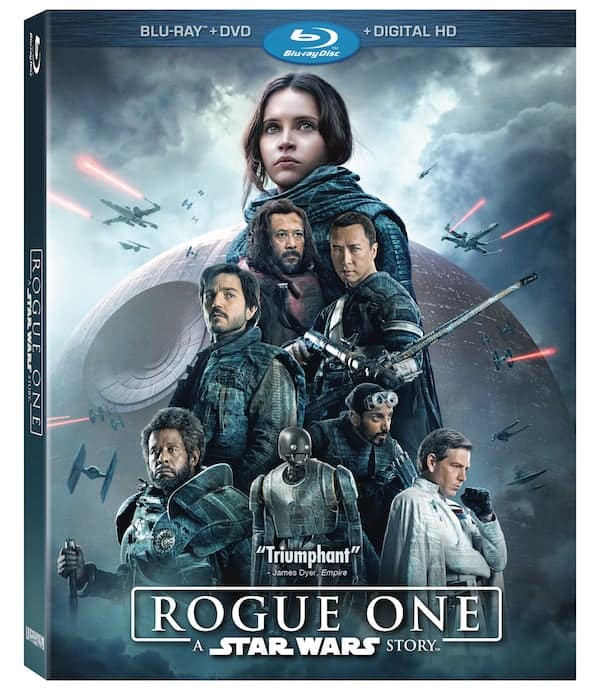 The seventh highest-grossing film of all time in the U.S., fans can now own the epic action-adventure thriller Lucasfilm’s “Rogue One: A Star Wars Story,” on Blu-ray™ Combo Pack, DVD and On-Demand on April 4.

Never-before-seen “Rogue One” bonus material will take fans behind the scenes with the movie’s diverse, dynamic cast and inspired team of filmmakers. An intimate collection of stories reveals how the film came to life, as well as hidden Easter Eggs and film facts that audiences may have missed in the theater.