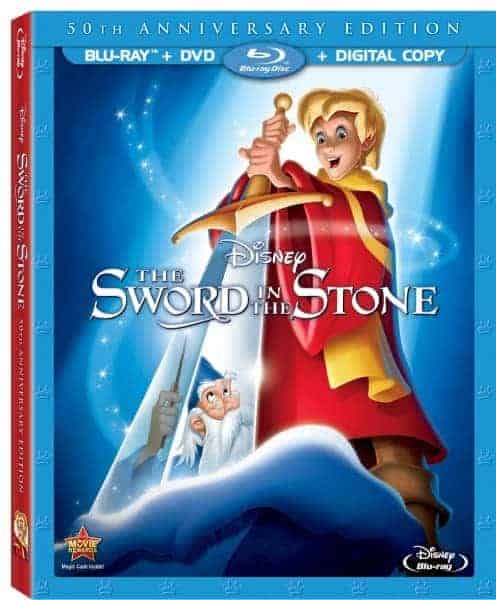 For true admirers and fans of Walt Disney, The Sword in the Stone holds a special place as it was the last animated masterpiece whose release Walt Disney lived to see. Although Walt Disney never knew it, he himself was character designer Bill Peet’s model for Merlin. Peet saw them both as argumentative, cantankerous, playful and very intelligent. Peet also gave Merlin Walt’s nose.  The Sword in the Stone was first released to theaters on December 25, 1963 and is their 18th full-length animated feature film.

Merlin: Blow me to Bermuda!

Arthur: Where… Where did he go?

Archimedes the Owl: To Bermuda, I suppose.

Archimedes the Owl: Oh, an island way off somewhere that hasn’t been discovered yet.

Arthur: Will he ever come back?

Archimedes the Owl: Who knows? Who knows anything?

The Sword in the Stone was one of my favorite movies growing up. I enjoyed anything involving magic and sorcery. So I was incredibly excited to find out that Disney’s THE SWORD IN THE STONE is celebrated it’s 50th anniversary this year with a Blu-Ray release on August 6th. Scenes from the movie still flash vividly in my mind but others have become fuzzy with the passing of time. I didn’t realize how much I had forgotten until I took this fun Disney Insider Quiz.

1. In what form does Merlin finally defeat Madam Mim?

2. During their lessons, how many animal forms does Merlin transform Wart into?

3. Madame Mim was voiced by Martha Wentworth. Which other character in the film did she voice?

5. What modern-day location does Merlin visit?

A) Bermuda
B) Disneyland
C) London

1. C – Tiny but powerful, Merlin’s transformation into “Malignalitaloptereosis” knocks Mim out of their duel.
2. C – Wart becomes a fish, a squirrel, and a sparrow in turn.
3. B – Wentworth can also be heard voicing multiple in 1961’s 101 Dalmatians.
4. C – Cabot had a long and distinguished Disney voice career – he was also Bagheera in The Jungle Book, among many others.
5. A – In a moment of frustration, he exclaims “Blow me to Bermuda!” and promptly disappears.

I only answered 3 of them correctly! How well did you do?