It’s hard to believe we’re approaching the third anniversary of the day my husband left for basic training. Our decision to join the military came at a point in our life when we were searching for a catalyst for change – and boy was it. Unlike the vast majority of service members, my husband did not join the military directly after high school, not even close. Instead, we went to college, got married, bought a house, started a family and almost a decade later made the decision as a family to join the military lifestyle. It worked for the goals we wanted to accomplish and we were thrilled at the prospect of a job that can offer both adventure and security simultaneously. It was less than three months from the day we first walked into the recruitment office for more information to the day that he left for training.

I remember our families’ concern that we were jumping head first into a decision that could potentially be wrong for us but something about it felt right. Looking back three years later and I have to say that of all the plans we had made in our life together, this has been the only journey that took the expected path. To this day, it still feels right. 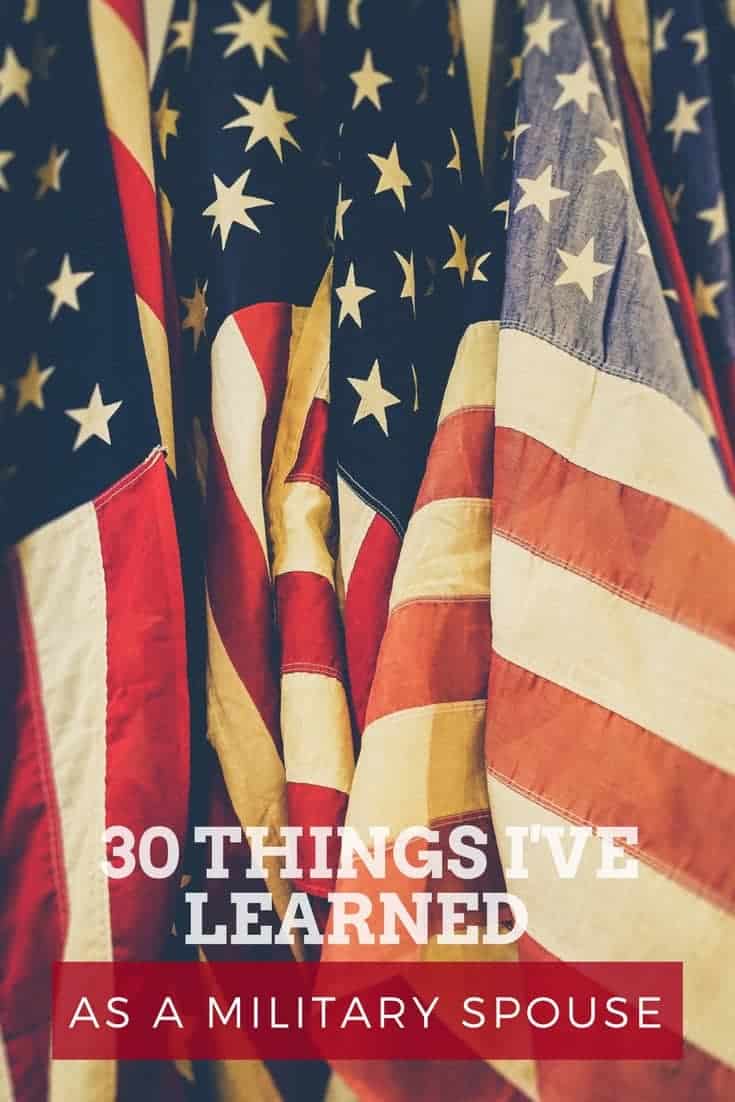 1. You will forever be saying “it’s not as bad as bootcamp” or “we’ve been through worse.”

3. You won’t get home as much as you say you will.

4. The military life can be hard on a marriage (no surprise there) but it can also strengthen a marriage. It allows you the time apart to grow as individuals and to miss the small everyday nuances of your relationship. In many ways, it allows you to fall in love with your partner over and over again.

5. That being said, one of the things I’ve learned as a military spouse is that marriage in the military takes work, perhaps even more than in the civilian world. It’s work to not allow the long hours, unpredictable schedules, never-ending stress, communication inconsistencies and nomadic lifestyle to get you down.

6. Tent poles are important. When your spouse is home, it’s important to make tent poles in your relationship: take the vacation, go for the weekend, get out with the kids, get out without the kids.

7. The Homefront Club is a book that’s worth its weight in gold for new spouses. The Homefront Club: The Hardheaded Woman’s Guide to Raising a Military Family was written by Jacey Eckhart, a former military brat and military spouse. This book was a comfort to me in the earliest days when I received my first taste of military life and began to have doubts. The book is witty, humorous and encouraging, while giving you an accurate picture of military life. I also love that it’s applicable to any spouse – whether you’re new, seasoned, newlyweds, have teenagers or/and young children, or no children. She offers advice on how to deal with mother-in-laws, methods of finding full and part-time work, pre-deployment work-ups, post-deployment problems and the holiday blues.

8. Murphy’s Law: Everything can and will go wrong the minute your spouse leaves.

9. River City is a state of being, not a destination. 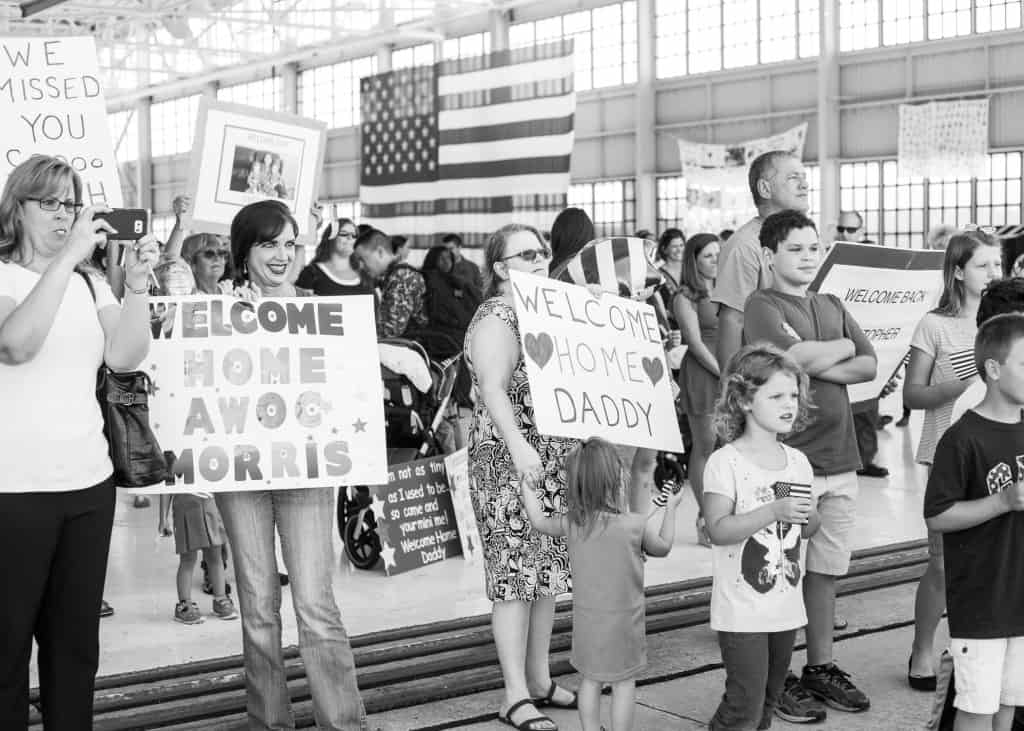 10. Military Homecomings are beautiful, emotional, joyous and should not be missed.

11. You should go to the ball. It’s an excuse to dress up and double date with friends. Plus, you don’t have to cook dinner, wine is free, date nights are rare and they often provide child care!

12. You have to be either a duck or a dog to survive military life. I can’t remember where I first heard/read/learned this motto, but it’s always stuck with me because as you may have guessed, I’m no duck. The idea is that ducks are able to survive because their feathers allow the water to roll off their backs. It takes a special person to be a duck, my husband is a duck. I had to learn quickly to become a dog. A dog isn’t able to allow the water to roll off their fur, they carry it with them for a short time but then they must shake it off.

14. Finding fellow military kids for your kid to hang out with will make you feel like you’re winning at the parenting game.

15. You will fall in love with the decorum, history, and honor present at all military events from bootcamp graduation to pinnings to retirement ceremonies.

16. Non-military friends who just get it or at least try to get it are treasured.

17. Your spouse really is your best friend.

18. Military friendships are on a different level. You don’t get the luxury of getting to know someone over time and developing connections. Instead, you basically have to go with your gut. Does my gut like this person? Yes. Do I trust this person? Yes. Now you are friends. The benefit of this is that you become friends with people who may have vastly different views and experiences from you. It has made me a more accepting, well-rounded person and I’m so grateful for the friendships I have made.

19. I now appreciate what service members and their families go through so much more. Now that I know what this life is really like, my appreciation has grown exponentially.

20. The military has it’s own language. You will learn it and use it. You will then have to break it down for your (his) family.

21. I realize now that I took how much our family helped us with our kids, and the freedom that it brought, for granted.

22. Most of your family won’t come to visit you, but others will use your home as an excuse to travel and you will probably see them more than you think. Those people are your favorite and you love them more because of the effort.

23. When you picture the typical military member, the image that comes to mind is very carefully curated by the powers that be. But you quickly realize that the slender, clean-cut, straight-laced facade is just that – a facade. Military members come from all backgrounds and all walks of life. You would be surprised at the lifestyle and personality types found within the communities. 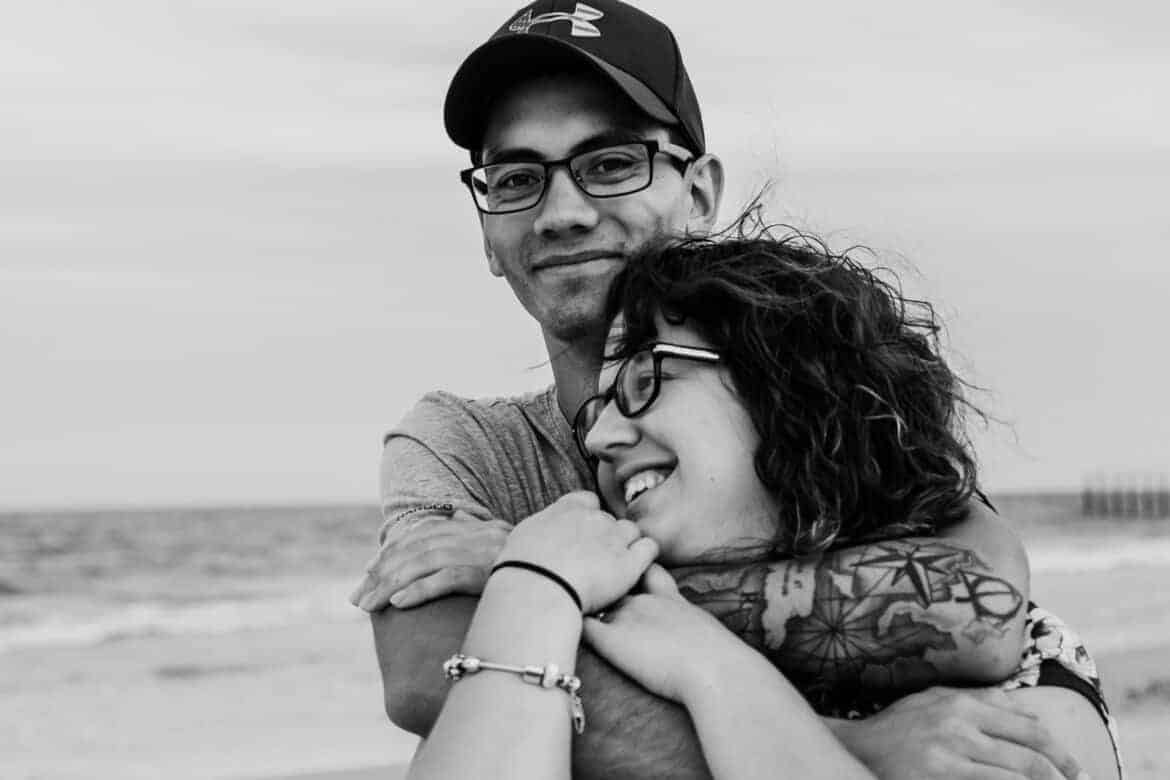 25. Even years into the service, your moms are going to have a hard time with the distance.

26. Care packages aren’t as necessary as you think, but cherished more than you know. So send them often.

27. Speaking of care packages, Amazon Prime is your BEST FRIEND. Husband deployed and you’re throwing a small pity party? Amazon Prime your toilet paper, your pantry items and all your snacks. No need to leave the house this weekend. Want to send a care package that makes it there before next month? Amazon Prime is the answer. Sending gifts home for the holidays? Prime baby! Try Amazon Prime 30-Day Free Trial

28. Military kids are some of the most resilient, courageous, adaptable, and mature kids that you will ever meet. They create their own culture and pass down guidance, friendship, and knowledge from one to another on the playgrounds.

29. The more versatile we are, the happier we are.

30. Deployment is a great time to pick up a new hobby, spend time on yourself, travel with friends, and learn something new.

5 thoughts on “The Good, the Bad and the Ugly of Being a Military Spouse”