I know what you’re thinking, she’s built for speed and endurance right? You’re right, but I think there is a bit of a techie in her too. Like any woman she has layers. Sleek, sexy lines on the outside with a 4 cylinder direct injection engine and all the features a guy could ask for inside. Just so we’re clear, I’m talking about my object of my affection for a one week test drive – the 2012 Kia Optima EX. 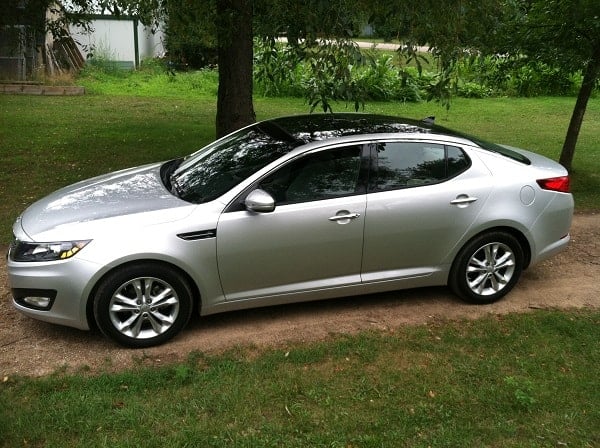 I’ll admit – I have been excited about the 2012 Optima ever since I watched Blake Griffin jump over it during the 2011 dunk contest. Granted it may have been his dazzling “assets” that caught my eye, but it was the car that kept my attention. Alas, it wasn’t meant to be until recently that I was able to steal one away for a week long rendezvous. I was, in a word, blown away. I didn’t want to give it back! 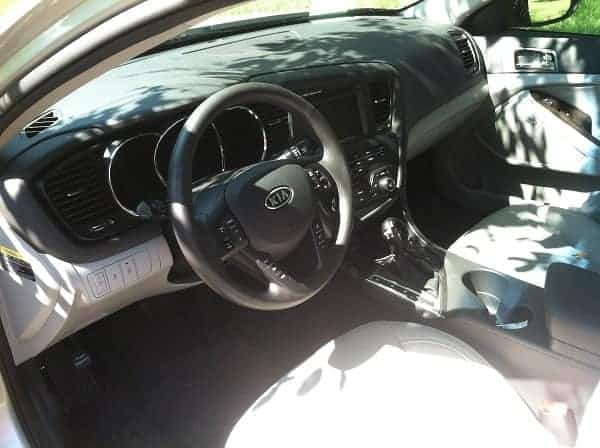 As sexy as the outside is, the inside is just as techy. The Kia Optima has every feature on my “must have” list and a few I didn’t even know I wanted!

Now as wonderful as these feautures were, there are some that just can not be put into a bracketed list. For me, one of the most important features is safety. The 2012 Kia Optima safety feature list is a mile long. I was very impressed. You always hope that nothing ever happens to your family but I want a car that’s prepared to handle the worst life may throw at us.  Each side of the optima has full-length side curtain airbags, dual front seat-mounted side airbags, lower anchors and tethers for children (LATCH), and much more. A few of the much appreciated but unexpected features were LED Turn Signals, Fog Lights, and Dual Note Horn. They may not protect you in an accident but they will help avoid one all together! 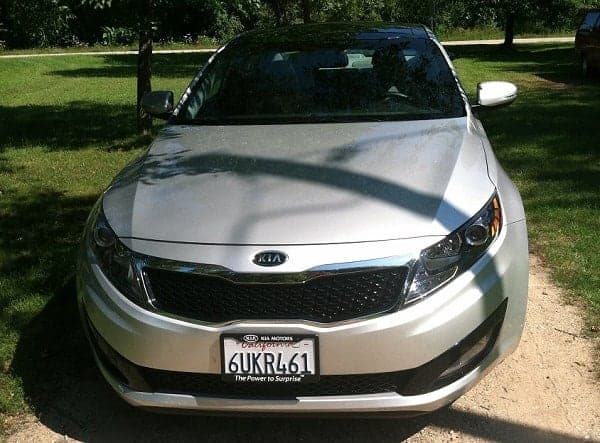 Another important feature for me is storage. I use my car for tack storage (for my 1200lb neighing child), a closet, and an on-the-go diaper changing station to name a few. Needless to say I need space, something the Kia Optima is not short on.

Lets start with the little things like 8, count them eight, cup holders, front seatback storage pockets, overhead sunglasses holder, 60/40 split backseats and a front center console  including: armrest, storage, cupholder. The split seats are meant to give you extended trunk storage but a mom at a picnic may use them a bit unconventionally. Lets say, perhaps by folding down the seat to use it as a flat diaper changing surface ;) . 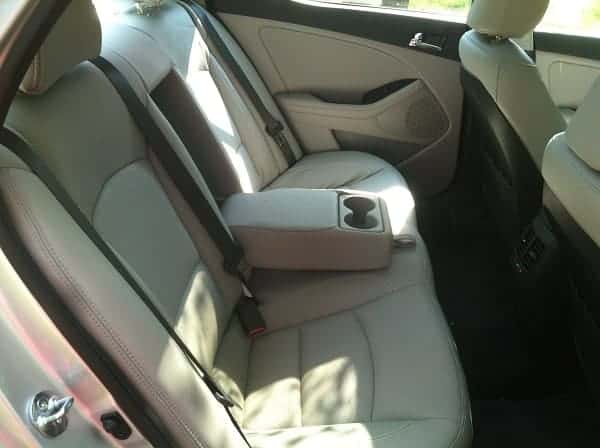 Speaking of the trunk it features 15 cubic feet of space. As it  happpens that will hold a diaper bag, 1 Western saddle, 1 Huntseat saddle and a small laundry basket with room to spare. Now if saddles aren’t your thing, on laundry day it held 3 stand up laundry baskets (laid flat) and 2 laundry bags. 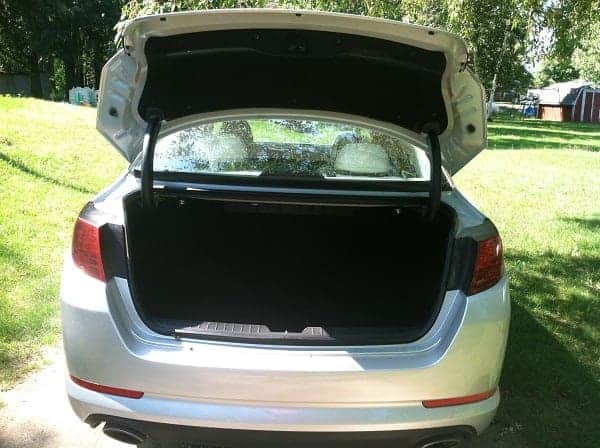 While the storage is wonderful there are some other perks that set the car apart from the rest. One of which is the back up camera. I’ll be honest, I never thought I would use or appreciate a back up camera but oh did I! Our driveway is not long but it is slightly winding and if you don’t back out just so you spend the rest of the time correcting yourself. With the back up camera I never had that problem! I also avoided running over 2 toys that would have otherwise been destroyed without it.

Lastly, I would love to devote hours to talking about the steering wheel control and dashboard display. Unfortunately, I’m on a 2 year old clock and she really cracks the whip. So I’ll keep it short and sweet. It’s amazing, phenomenal, you’ll never want anything else.

I cant tell you how many times I answered the phone by saying “Guess what, I just answered with the steering wheel!”  I also loved the onscreen naviation features.  While I didn’t drive anywhere new I did utilize it to maneuver around some serious road construction which saved me a few hours in a traffic jam.  I also had the privilege of driving the Kia Optima during one of the hottest weeks of the summer and I have to say between the cooled seats and climate control I NEVER wanted to leave the car. 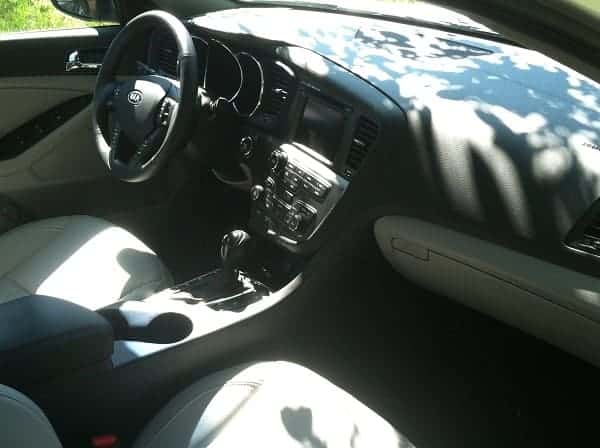 Everything about the car was family friendly but I loved how driver friendly it was too. All controls were angled toward the driver and they made as much as possible voice controlled or steering wheel controlled.

I was so spoiled by the Kia Optima 2012 that it made going back to Kia Optima 2006 a sad event – which says a lot since that’s top of the line too. I miss the way the new Kia floated down the road, it’s quiet engine, and the way I just FELT like luxury driving it. I think the Kia Optima is worth EVERY penny of it’s $28,000 price tag and I honestly don’t have a single complaint.

I received a 2012 Kia Optima for a length of time in order to give you an honest and in depth review. All opinions are my own and no additional compensation was received.