When I asked a friend if she wanted to join me to see an advanced screening of Pitch Perfect, she responded, “never heard of it.” So, I pulled the friend card and argued, what difference does that make, she still wasn’t convinced. But when I told her Rebel Wilson from Bridesmaids was in the movie, she was game.

I really didn’t know much about the film either, just that it was supposed to be funny and I love the deadpan delivery of Rebel Wilson. If I’d known the plot was like American Idol auditions hooked up with Glee and had a  Bring it On love child, I might have dismissed the film without seeing it. That would have been a mistake! 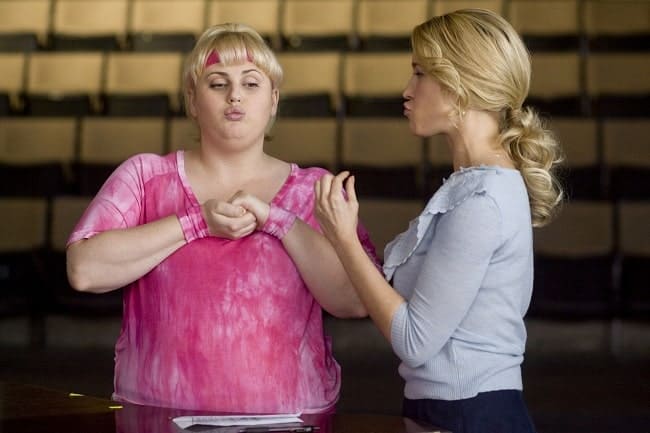 Maybe you’ve seen the trailer when Wilson introduces herself to the Bellas as “Fat Amy.” “You call yourself Fat Amy?”, they ask her. Wilson responds “That’s what I call myself so twig bitches like you don’t call me that behind my back.”

You know how some movies pack all the best moments from the film into the trailers and then when you see the movie you’re left disappointed, Pitch Perfect is NOT that movie! Instead, this hilarious film is packed with witty dialogue, acca-awesome music, and more importantly engages the audience!

When I wasn’t laughing or clapping with the audience, I was grooving to the music. Yes, for the record, I did throw my hands up during the “Party in the USA” performance, doesn’t everyone?

Oh and when “McLovin” appears as Tommy, the random guy in charge of accapella auditions, fellow moviegoers cheered and yelled MCLOVIN!

Let me break it down for you…Pitch Perfect stars Oscar nominee Anna Kendrick as Beca a college freshman that doesn’t want to be there and struggles to find her place with the cliques on campus. In a hilarious and acca-awkward shower scene, Beca is reluctantly recruited by Chloe (Brittany Snow) to audition for the Barden Bellas.

Beca’s real love is mixing music and dreams of a professional career in Los Angeles.  The Barden Bella’s will have to claw their way back to the top after their memorable loss at last year’s state championship when lead singer Aubrey (Anna Camp) showered the audience with projectile vomit. (Note to self, eating that pizza before the movie, might not have been the best idea with such a graphic scene) 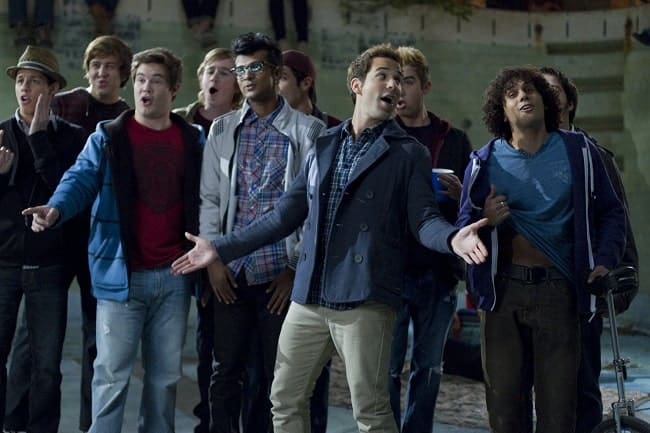 Standing in the way of their championship dreams are the boys of Barden, the Treblemakers led by their lead singer Bumper (Adam Devine). The somewhat strange mix of girls on the Bellas have the talent, but Aubrey’s traditional song choices put everyone to sleep. Beca and “Fat Amy” (Rebel Wilson) shake things up when the join the Bellas with their actions and their music.

What make this movie great, are the quotable lines that will be remembered and used among friends that have seen it together. The next time someone asks me if I’m serious, they might just hear me say “Dixie-Chicks serious.” My favorite new cardio activity is “horizontal running” and “sometimes I feel like I could do crystal meth but then I think, hmm, better not.”

Rebel Wilson steals all the thunder with her performance as she definitely crushes it!  To the critics comparing this to Glee, have you actually seen Glee or this movie, other than accapella music and nerds they have very little in common.

While the film has a fresh and original feel, it also has its cheesy moments, racial slurs, predictable plot turns and is filled with stereotypes and cliches. Nonetheless, its comedy is so entertaining and music on key, that the positives drown out its shortcomings. This is one of the first movies in ages, that I can’t wait to download the soundtrack!

As we exited the theater, the friend that I dragged to the movie with me, declared her love for Pitch Perfect as she said, “I’m definitely buying that movie, it was hilarious!”

I attended a press screening of this movie at no charge for purposes of this review. All opinions are my own and no compensation was received.