When I first saw the 2014 Kia Forte I couldn’t help but think “that’s a sporty little number”. The car is pure sex appeal and boy is it bold. While it’s moved up to the midsize car class, it definitely doesn’t look like your typical family sedan. For me, the new Kia Forte offered one of the biggest of modern drivers’ demands – technology.

“The all-new Forte effectively raises the bar on the compact segment with its upmarket features and striking design,” said Michael Sprague, executive vice president of marketing & communications, KMA.  “And with its long-standing value story and reputation for quality, the Forte is now more of a complete package than ever and a fiercer contender within its competitive set.”

Most cars on the road today are getting MPG that’s better than ever, they come in all shapes and can fit 2 to 8 people but what really sets them apart are the extras. As a self proclaimed geek, it’s more specifically the technology the extras that sell me on a car. Sure the Forte is a 6 speed automatic with a 2 Liter engine (in which we had no problem passing vehicles at highway speeds on mountain roads), 17 inch wheels and power sunroof but what its it like on the inside? 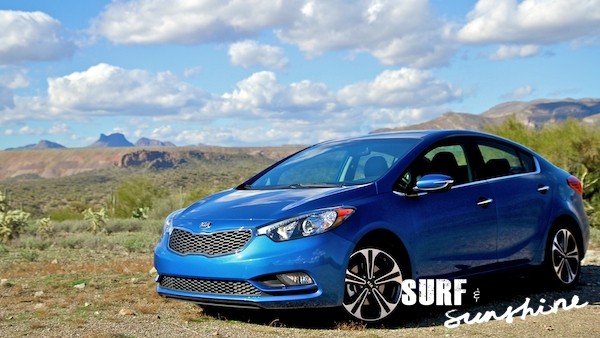 I think when you look at the Forte’s “standard” list it becomes pretty obvious. The 148hp LX comes standard with steering wheel-mounted audio controls, SiriusXM™ Satellite Radio, Bluetooth® wireless technology, power windows, air conditioning and power heated outside mirrors. While the 173hp EX model comes standard with remote keyless entry with trunk opener (perfect for when your juggling your purse, umbrella, and your toddler with toys), rear camera back-up display, a sliding center armrest and a cooling glove box! But these are only a few options in a laundry list of techy features for the 2014 Kia Forte. For instance, the Technology Package adds HID headlights, LED tail lights, a 4.2-inch color LCD cluster screen and dual-zone automatic temperature control with rear seat ventilation. 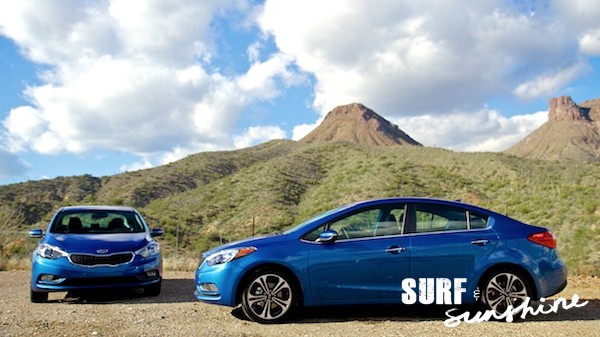 The Forte I test drove was a fully loaded EX model. The center control area is slanted 10 degrees toward the driver which is not only great for control purposes, it also means I can readily bat away hands that think it’s okay to change the radio station. I also appreciate the heated steering wheel, as well as the front and rear seat heaters. I’ve always wondered why heated seats only came available in the front when it’s the little passengers in the back seat we worry about (and complain) the most. The dual-zone automatic climate control and rear-seat air vents are also a nice touch. On hot days, when the AC is necessary, it always seems like the people up front have to turn to icicles before it’s even cool in the back seat. Not anymore with all the various ways we can heat and cool regardless of position in car – smart!

And we can’t forget what may be deemed as one the most techy features of all: Kia’s UVO infotainment system and navigation system. I’ve said it before and I’ll say it again – this infotainment system is easily my favorite of all the varieties out there on other vehicles. Its the most intuitive and has rich features that I find useful. You can take advantage of Kia’s bluetooth feature to sync your smartphone (and your passengers!). From there you can place calls hands free or listen to pandora radio without ever touching your phone. You can also switch between radio, satellite radio and your own personal library. Although I always prefer my cell phone navigation system, the UVO comes in a close second. And with the introduction of the new UVO eServices – things are only going to get better.

It’s pretty safe to say that the new design of the 2014 Kia Forte was a smart choice. The premium package is a techy dream but even at it’s lowest price point, the Forte offers enough “standard” features that it’s ahead of the competition.

Thank you to Kia for inviting me to Scottsdale to experience the new 2014 Kia Forte in person. My travel expenses were paid, my opinions are my own.

31 thoughts on “2014 Kia Forte Review: A Smart Choice that Won’t Break the Bank”