The Star Wars Anthology movies have made for quite an interesting addition to the Star Wars canon, because they take us outside the “current” place in the timeline of the main series to explore the history behind certain characters and events in the Star Wars mythos.  This is a perspective that had historically been reserved for non-movie media such as books and TV, but is now made accessible to fans who are only interested in the movies themselves.

The most recent addition to the Anthology series, “Solo: A Star Wars Story”, tells us the tale of Han Solo’s journey from common street thief on his home planet of Corellia to spacefaring smuggler and captain of the Millennium Falcon.  However, it also shed a great deal of light on events that had only been mentioned in passing before now, as well a much greater understanding of classic characters from the original Star Wars Trilogy whose pasts we previously knew relatively little about. 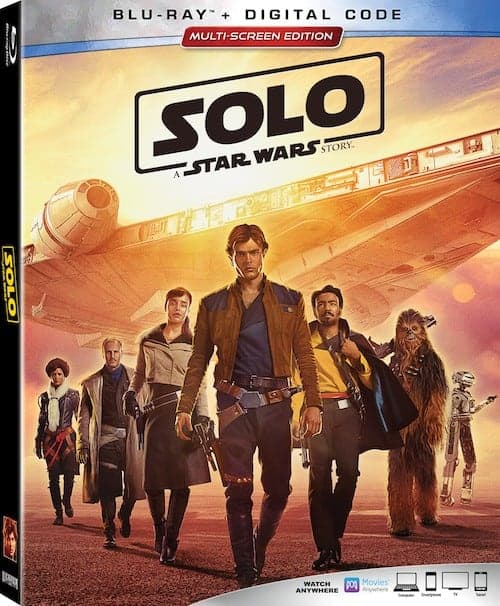 #7: Han’s devotion to Leia was probably instigated by his failure to protect Qi’ra

Toward the end of A New Hope, Han Solo was all ready to take his reward for rescuing Princess Leia and head for the hills, leaving the Rebels to their fate.  Instead, he returned at a critical moment and helped the Rebels destroy the Death Star.  It appeared at the time than Han’s change of heart was purely out of a sense of justice, but his history with Qi’ra tells us there was probably more to it than that.

Han’s infatuation with Leia was clear from the start, and while it didn’t blossom into a full-blown romance until later on, Han spent much of the first two movies going against his better judgment for Leia’s benefit.  It’s likely that his residual guilt over not being there for Qi’ra when she needed him played a big part in that.

Han’s only desire when “Solo: A Star Wars Story” began was to escape Corellia with Qi’ra so they could make a new start together.  That fell apart when they were abruptly separated during their escape, and even after their reunion, Han wanted nothing more than to free her from her servitude to Crimson Dawn.  Unfortunately, she remained in their clutches even after the death of Dryden Vos and, as far as we know, stayed there.

Han put his neck on the line for many disadvantaged people over the years, but the one person he couldn’t save was the one person he cared about the most.  The ghost of that guilt can be seen in his protectiveness toward Leia many years later.

#6: Han’s time in the Imperial military made him a much more valuable member of the Rebellion

There’s been a lot of conjecture over the years about what Han Solo was up to before joining the Rebellion.  However, if you asked a hundred Star Wars fans what they suspected about Han’s past, there’s a good bet that three years in service to the Imperial military wouldn’t be the answer most people would have given you.  Nonetheless, that’s exactly what Han did in the aftermath of his escape from Corellia.

While Han’s attitude prevented him from achieving his goal of becoming an ace Imperial pilot, it explains a lot about the things we see him doing during the original trilogy.  Han’s knowledge of Imperial procedures and codes makes a lot more sense in retrospect, and his inside knowledge undoubtedly qualified him for his promotion to command rank, and helped during the planning of operations like the attack on the shield generator on Endor.

#5: Making the Kessel Run and living to tell the tale is a significant accomplishment in and of itself

The details of Han Solo’s infamous, record-setting trip through the Kessel Run had long been kept vague, especially how he could have managed it in less than 12 parsecs (since parsecs are a measure of distance, not time).  “Solo: A Star Wars story” laid the entire journey bare, and showed us that anyone would be lucky to even make it through the Kessel Run alive, regardless of how many parsecs it took.

We discovered that the planet of Kessel is surrounded by a vast, violent cosmic storm called the Maelstrom.  Visibility is limited, electrical bursts are everywhere, and the clouds hide gigantic squid monsters that are not only native to this deadly environment, but love eating spaceships to boot.  As if all that weren’t enough, at the center of the storm field is a super-powerful black hole called the Maw, whose gravitational pull is so strong that it took a shot of Coaxium to give the Falcon the power it needed to escape.

If these are typical of the dangers to be found on the Kessel Run, it makes Han’s record all the more impressive.

#4: Chewbacca had a far more traumatic background than we ever knew

Unless you are the type of fan to dive into Star Wars novels and other media, the only place you probably ever saw any Wookiees other than Chewbacca was during the Battle of Kashyyyk in Revenge of the Sith.  While the non-movie media gave us a much clearer view of the horrors facing Chewie’s people during the Imperial years, the stark reality of their plight was first revealed to movie-only fans in “Solo: A Star Wars Story”.

After Kashyyyk fell to the Empire, the defeated Wookiees were rounded up and used as slave labor by the Empire.  The fact that we never saw Chewie in that situation suggested that he had somehow escaped the fate of his brethren and remained free until linking up with Han.  We now know that nothing could be further from the truth.

When Han first met Chewbacca, he was in chains in a sewage-filled pit below an Imperial encampment, where he was forced to fight for the entertainment of his captors.  If he was taken captive when Kashyyyk first fell, he could have been enslaved for over a decade by the time Han rescued him.  This certainly explains his instinctive hatred of chains and handcuffs, not to mention the Empire, but it’s also an important component in another major development…

#3: We now have a much deeper understanding of Chewbacca’s loyalty to Han

Chewbacca’s oddball friendship with Han Solo has long been attributed to a life debt that Han probably earned by saving Chewbacca’s life in some fashion.  It was the best explanation anyone had for why a proud Wookiee general would associate with a career criminal.  The rescue certainly played a role in it, because if it weren’t for Han, there’s a good chance that Chewbacca would never have escaped Imperial captivity.

There was far more to it than that single act, however.  Throughout “Solo: A Star Wars Story”, Chewie observed the outwardly indifferent, allegiance-phobic Han repeatedly putting his own neck on the line to help the downtrodden and oppressed.  To someone like Chewbacca, whose race had been systematically abused by the Empire, watching Han not only help free his fellow Wookiees on Kessel, but also risk his life defying Dryden Vos to help the Cloud Riders proved to Chewie that Han cared a lot more than he was willing to let on, and was worthy of his respect and friendship.

#2: The golden dice were much more than a decoration to Han

The significance of the golden dice that Luke Skywalker took from the Millennium Falcon, then later gave to his sister Leia in the Last Jedi was lost on a lot of fans.  It was clear that they held some kind of meaning, but most fans had never even noticed them before Episode VIII. (For the record, they had been there since the original movie, though you had to look closely to even see them in the cockpit scenes.)

Still, in the absence of the recently-departed Han himself, it was obvious by the reactions of both Leia and Kylo Ren on seeing the dice that they represented the very essence of Han Solo as a person.  No explanation was forthcoming at the time, but “Solo: A Star Wars Story” filled us in on both their origin and their deeper meaning to Han himself.

To Han, the golden dice represented his journey from the slums of Corellia to a life of freedom and, eventually, heroism during the Rebellion.  They were also a reminder of the only woman he ever truly loved besides Leia, as he had given them to Qi’ra before they were violently separated, and she returned them to him when they were reunited years later.  Those dice embodied everything of the distant and troubled past he had extricated himself from, and how far he had come in escaping that life.

#1: Droids are every bit as sentient as any living thing in Star Wars

Droids have always occupied an interesting gray area in the Star Wars universe.  While many have been portrayed as minimally-intelligent machines that don’t resemble anything we’d consider alive, others (such as C-3P0 and K2-S0, and to a certain extent R2-D2 and BB-8) have been given full-blown personalities, a fully-human ability to perceive and interact with their environment, and most interestingly, a sense of self-preservation.

This pseudo-humanity led to an interesting dichotomy where, on the one hand, droids are treated as full-blown characters in their own right, while also being “expendable” enough to be treated in ways you can’t treat a biological character.  For example, it’s okay for C-3P0 to be blown to pieces or have his head attached to a different droid’s body, while you obviously couldn’t do the same with, say, Poe Dameron without turning it into a horror movie.

The portrayal of L3-37 in “Solo: A Star Wars Story” brought the realms of human and droid closer together than ever.  In many ways, she became the first ever in-universe advocate for the rights and freedoms of droids.  She showed Lando resentment on one level by calling him her organic overlord, but on another level, discussed what she perceived as his feelings for her with Qi’ra, and the reasons she CHOSE not to share in those feelings.

The idea of a droid having a personal say in anything they do, much less anything resembling romantic considerations, is groundbreaking enough in its own right.  L3 then took it a step further by not only lamenting the place droids occupy in society as second-class citizens, but actually becoming a martyr for the cause by instigating a droid rebellion on Kessel and losing her own life in the process.

The idea of mechanical beings being treated as sentient life forms with personal rights has been broached in other sci-fi settings, but this is completely unexplored territory for Star Wars.  It’ll be interesting to see if this was a one-time thing, or if future Star Wars stories will further explore the idea.  Does the fact that what remained of L3’s mind was transferred into the Millennium Falcon make it a sentient ship?  Could L3 be somehow recovered from that to play a role in future events?  Only time will tell.

1 thought on “7 Ways “Solo: A Star Wars Story” Changes the Way We Look at the Original Trilogy”