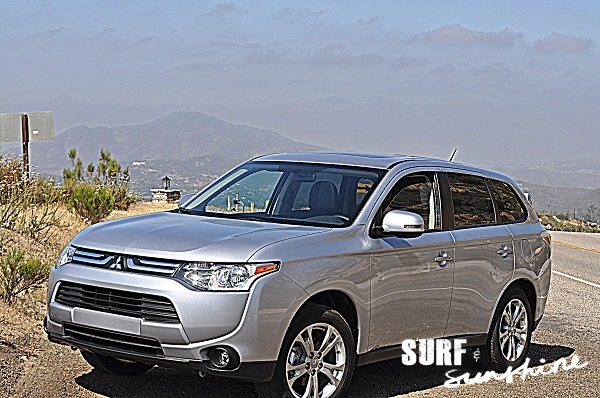 I can’t remember the last time I drove a Mitsubishi. It seems like they dropped off the road, the map, the radar – but I think that’s changing with their new line-up. Two weeks ago I was re-introduced to Mitsubishi Motors when they flew me out to San Diego to drive the all new 2014 Mitsubishi Outlander. What if you could go back to the drawing board and re-design yourself? What traits and features would you focus on? When Mitsubishi decided to re-design the 2014 Outlander, they wanted to make it leaner, smarter, bolder, and safer. They challenged the engineers to create an affordable crossover that could seat seven, but stand apart in a crowded market. 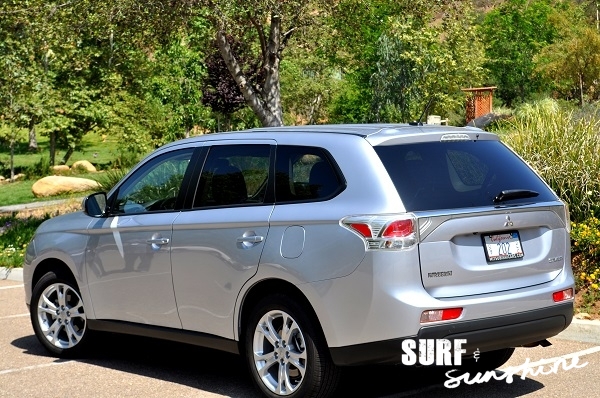 The result? 2014 Mitusubishi Outlander has been completely re-designed, using a high tensile steel, it’s 220 pounds lighter than the previous model. The front has a bolder, more aerodynamic design, making it 7% more aerodynamically-efficient than its predecessor. Its MIVEC engine (Mitsubishi Innovative Valve timing Electronic Control) gives the Outlander best fuel economy in its class at 28 mpg on the highway.

All trim levels feature an ECO drive assist mode which reduces engine power when accelerating, and adjusts output of the air conditioner to save fuel consumption. Drivers can monitor their efficiency by watching the eco drive support system, a plant with five leaves, the more leaves that are green, the more efficient your driving habits.

While there are three rows of seating, the third row is not meant to be comfortable, long-term seating for an adult. The third row is mostly there to accommodate small children that aren’t required to sit in car seats. It can be used for 1-2 adults on a short trip in a pinch, but I call “not it.” 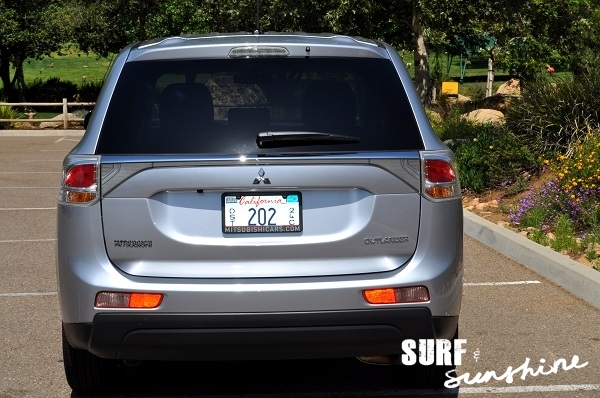 Cool features that make your daily commute or family road trip safer: Adaptive Cruise Control (ACC) – With radar in the front grille, the sensor measures the distance between the Outlander and the vehicle in front of it. You can choose between three different settings, choosing the distance you’re most comfortable with maintaining. I was only able to test this feature briefly since the roads we were on were curvy, unfamiliar, and we frequently encountered bike riders, but its probably the closest thing to an “auto-pilot” on a vehicle.

Product Manager Bryan Arnett, used it on his drive from Cypress to San Diego, and was able to use the feature without the need for applying brakes or the accelerator. Which ranks super high on the coolness factor, yet without compromising safety. Speaking of safety, I was super excited about the Forward Collision Mitigation and Lane Departure Warning features.

When I tried using the Lane Departure Warning system on our winding drive through the Lyons Valley, San Diego area, I quickly learned the system works. It seems I wasn’t staying between the lines on those curvy roads, and if I was even slightly over the yellow line, the LDW beeped at me. Great feature for anyone, especially when on a long road trip, and you find yourself getting sleepy behind the wheel. 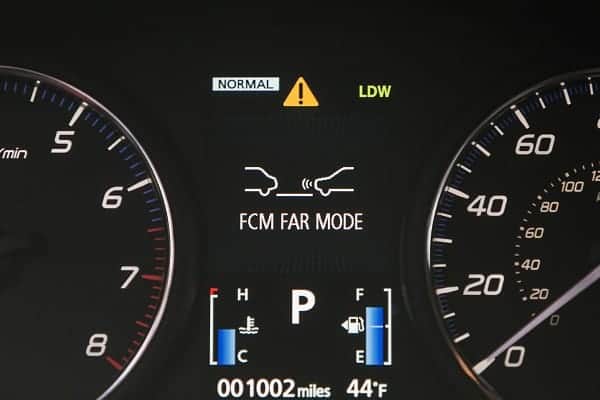 I did not test the Forward Collision Mitigation (FCM) system, which uses radar to warn you before you run into something in front of the vehicle, and then if you don’t react, it will automatically apply the brakes to prevent a wreck or reduce impact. My drive partner was 33 weeks pregnant, so I didn’t feel comfortable testing a system that prevents an impending collision.

Want to know if my drive partner made the four hour round trip without going into labor? You should definitely check out her side of the story over at Shaping up to Be A Mom.

Its important to note, you’ll add $3,300 to the SE and GT models for the FCM, LDW, and ACC safety features. Depending on your budget, $3300 is a small price to pay if it saves you from being in an accident. 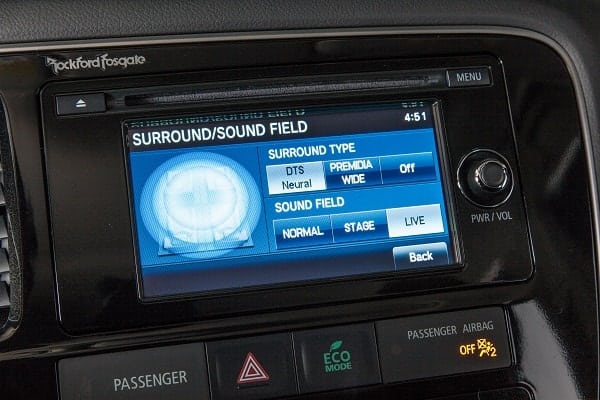 Safety is one of my first and primary concerns when driving a vehicle, next is the sound system. I rarely get to listen to the radio while at home, so when running errands alone in my vehicle, my stereo is usually cranking out some tunes. The Rockford Fosgate 710 watt sound system, rocked my socks. Nine speakers, a subwoofer, with Punch® control, DTS Neural Surround™,PremiDIA-­‐WIDE® surround, Dolby® Volume turned the interior into a concert hall. 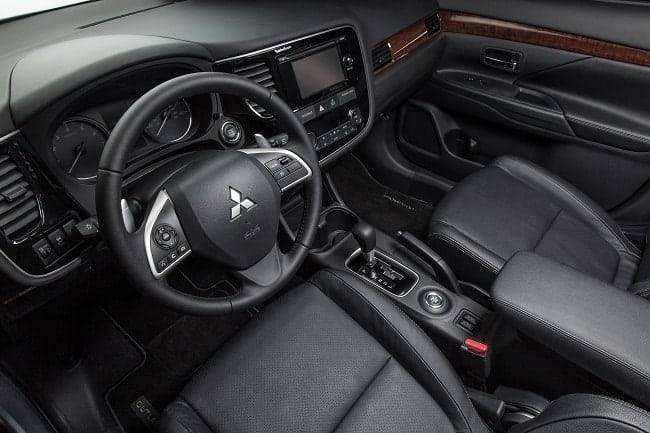 Also, the 2013 Mitsubishi Outlander Sport was just named a “Top Safety Pick+” by the Insurance Institute for Highway Safety (IIHS) from a field of 13 vehicles! While the 2014 Outlander isn’t available until later this month, Mitsubishi feels like it’s packed with safety features and set to also be recognized by the IIHS. We drove the cool silver in both the SE and GT models, but  2014 Mitsubishi Outlander colors include: diamond white, copper, mercury gray, labrador black, and cosmic blue (my favorite).

Pricing on the Outlander ES model starts at $22,995, $800 more moves you up to the SE model with 6″ touch panel display with high definition radio, and rear view camera among other upgrades. You can have the SE with SAWC (super all wheel control) for $25,795, and the premium GT trim starts at $27,795.

As a parent, as well as someone that is horrible at backing up, I can’t imagine buying a new vehicle without a rear view camera. When comparing my drive experience between the SE and GT, I prefer the get up and go of the GT model. Stay tuned to the Mitsubishi Facebook page for the latest news, including details on Mitsubishi Owner’s Day on July 13, 2013. Follow @Mitsucars on Twitter with #Mitsubishi and #14Outlander for news and updates on the Outlander and other vehicles.