“Ten-thousand years can give you such a crick in the neck!”

Okay, so maybe it’s more like 23 years since Aladdin hit theaters Thanksgiving 1992. That is when we got to meet a street-rat who dreamed of a better life, a rebellious princess who wanted to change her life, and a Genie who was larger-than-life! 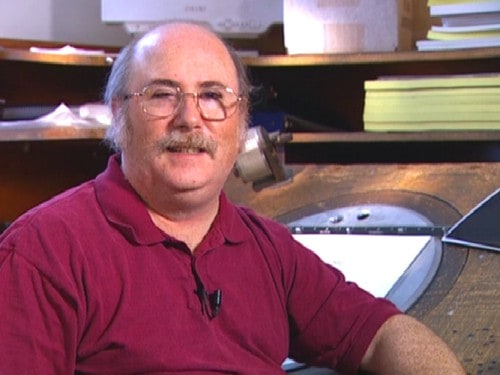 Last month I had the opportunity to meet the original supervising animator of the Genie, Eric Goldberg, who showed us what it took to bring the Genie to the big screen. Early on in the design phase the mantra was less is more. So they kept the design was fairly simple; no horns, no turbans, no excessive accoutrements (because when you can turn into anything, why muddle up the basic form). As for the blue color, Eric explained that all the good hero characters are in the cool color zone and the villains in the warm. The overall look of the film and characters were inspired by the drawings of Al Hirschfeld. Described as ‘Hollywood Arabian, ’the animation team incorporated the Hirschfeld ‘S-curve’ throughout.

One interesting fact we learned was that the Genie was written with Robin Williams in mind and as a way to convince him to provide the voice the animators used a voice track from one of Williams’ comedy routine and animated it as if it were the Genie. Obviously, it worked. Eric commented that Aladdin was the most improvisational animated film he had ever worked on, but he didn’t mind because Robin provided so much great material. For those that get the newly released Diamond Edition, they can see a bonus featurette called ‘Genie Outtakes’ where Eric animated some of Robin’s unused material.

When asked what it takes to be animator Eric said, “learn to observe and to caricature.” As for his favorite scene in Aladdin? – when the Genie is dancing with his hands during the song ‘Friend Like Me.’ At this point he asked us to pick up our pencils and drawing boards and he taught us how to draw the Genie. I think I did pretty well.

As a final treat, we were shown a preview clip of the upcoming animated film, Moana. In the clip we see Dwayne ‘The Rock’ Johnson’s character Maui trying to impress the title princess and her pig pet-sidekick with his amazing demi-god skills. Looks like another classic is in the works.