When I heard they were making a sequel to “G.I. Joe: The Rise of Cobra”, I choked on my cheeseburger, or whatever it was I was eating at the time. The first movie was so horrendous, who in their right mind would go to see the sequel? Then I saw the trailers for “G.I. Joe: Retaliation” and thought, this movie actually looks kinda cool. Alright, so the fact that Channing Tatum, Dwayne “The Rock” Johnson, and D.J. Cotrona were starring in it, might have played a part in my renewed interest. 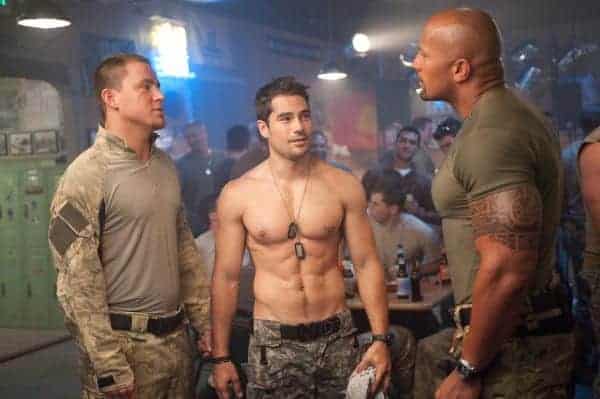 So for anyone that’s still reading this (I know some of you left your computer and headed straight to the theater to see the guys in action), in the sequel its the Joes vs. Cobras and the U.S. government. Cobra forces have taken the President (Jonathan Pryce) hostage and assumed his identity.  When the President orders an attack on the Joes in Pakistan, only three of them walk away from the rubble. Spoiler alert: Duke (Channing Tatum) doesn’t live to see another day. As a matter of fact, you won’t even see the above shirtless Channing Tatum in the movie because…they deleted the scene. <sad face>

Roadblock (The Rock), Lady Jaye (Adrianne Palicki), and Flint (DJ Cotrona) are left to discover the Cobras end game and save the world. Franchise fans will enjoy seeing Storm Shadow (Byung-hun Lee),  Firefly (Ray Stevenson) Zartan (Arnold Vosloo) and Snake Eyes (Ray Park) on the big screen. While Bruce Willis is solid as General Joe Coulton the original G.I. Joe, but his role is limited to more of a cameo part.

Not everyone, including what may be a large part of the film’s target demographic (tweens and teens), will appreciate the humor in the 80s references. But Director Jon Chu’s goal was to make a fun, action film that stayed true to the comic and takes the viewer on an adventure, with that in mind, I think he was on target. Chu, is a self-described hard core G.I. Joe fan, and made the movie in a way that his 12 year old self would be impressed.

Normally, I’m not a big fan of 3D films. I feel like studios overuse the technology, but don’t use it effectively. That’s not the case in “G.I. Joe: Retaliation.”  I actually found myself flinching/dodging once or twice during the martial-arts fight on the Himalayan cliffs, as Cobra ninjas battle the Joes, using lightning fast slashes of their samurai swords. The explosions, combat scenes, advanced weaponry, like firefly explosives and remote controlled bullets, really come to life on the screen with the 3D technology.

“The Rock” is perfect as a Joe, bringing the perfect physical presence to this elite force,  and it would be fun to see more of Roadblock and Gen. Coulton in the next film. (if there’s another film made) 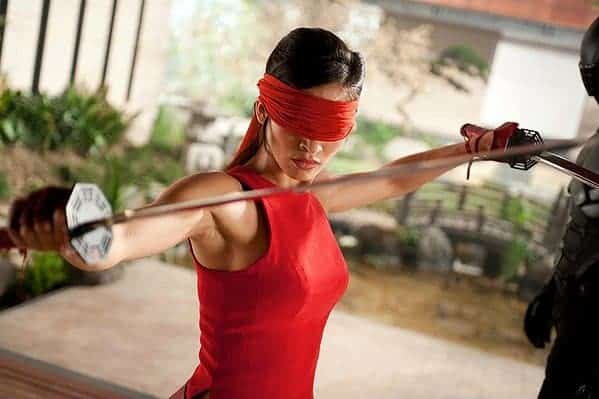 I should mention that before the screening started, all U.S. veterans were asked to stand as we applauded the “real G.I. Joes,” which I think was awesome. Also, they provided G.I. Joe stationary for anyone that wanted to write a letter to the troops. I am so thankful for the sacrifices our men and women serving in the armed forces, and their families make, so we can enjoy freedom! Thank you for your service and thank you Paramount Pictures, MGM and Skydance Productions for recognizing our vets.

“G.I. Joe: Retaliation” opens in theaters everywhere on March 28, 2013 and is rated PG-13 (make sure you see it in 3D, well worth the $). You can see more of the Joes in action on the G.I. Joe Facebook page,or  join the chatter on Twitter @GIJoeMovie.

I attended a press screening of G.I. Joe Retaliation to facilitate this review. As usual, all opinions are 100% my own.

Ps – because I know you scrolled back up to look, here you go again. You’re welcome.