The Coca-Cola Company has stepped up to help women around the world take control of their lives. Teaming up with a group of partners to give women around the globe economic empowerment, Coca Cola is providing them the chance to financially support themselves and their families.

First launched in 2010, Coca-Cola aimed to empower 5 million women by 2020. Since it’s inception, this ‘5 by 20‘ campaign has already helped 550,000 women take control of their economic and financial demands. The company is working with small businesses in over 200 countries around the globe to create jobs for women.

So what does that mean?

In many developing countries, education is not only not readily available, but not deemed important for girls/women. Imagine, with a lack of education and skills, it would be fairly difficult to support yourself, not to mention an entire family, right? Without the means to provide monetary stability, many women in these countries are caught in a hopeless cycle of poverty and unable to have the independence they deserve and crave.

This is where Coca-Cola steps in. The 5 by 20 program develops and implements programs that help provide the skills and education needed to earn a living wage. In addition, they provide financial services and even create a network or peers and mentors for continued support for the women. They provide training and information for jobs from farming to artisan work. These women are now able to provide for their families and finally be relieved of the stress, fear, and limitations imposed by poverty. 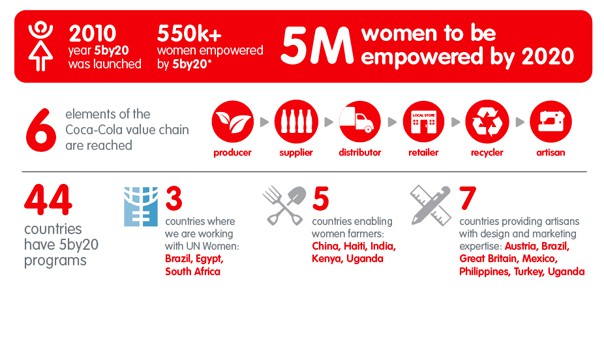 One of their success stories is found in India. On the outskirts of Ahmedabad, India a sewing school was established in 2010. The Jivann Jyot Sewing School was set up by Hindustan Coca-Cola Beverages Private Limited (HCCBPL), and it became an instant success. Originally, the school was set up with 15 machines, but the school became so popular, they needed to double the sewing machines, which were installed by the next year to accommodate the flood of students.

The women that are being trained at the school now have a means of income. One of the students, Shahnaz Bano, was pulled out of school in 7th grade because the ten mile walk to high school was too far and not always safe. Now, she is learning to cut and sew garments which will allow her to start her own business from home, giving her the means to earn her own money to help support her family.

In 2013, Coca-Cola created partnerships with international and regional organizations to further this incredible cause. Their partnerships include International Finance Company – IFC, Inter-American Development Bank, UN Women, and Bill and Melinda Gates Foundation. From around the world, people are coming together to provide women with better lives.

With growing resources for these women, families will be able to afford better nutrition, health care, and education. It is giving them a sense of pride and accomplishment. Slowly, it is helping build third world countries and spreading economic wealth while providing women with financial stability and independence.

Read more success stories at www.5by20.com and find out how you can help.