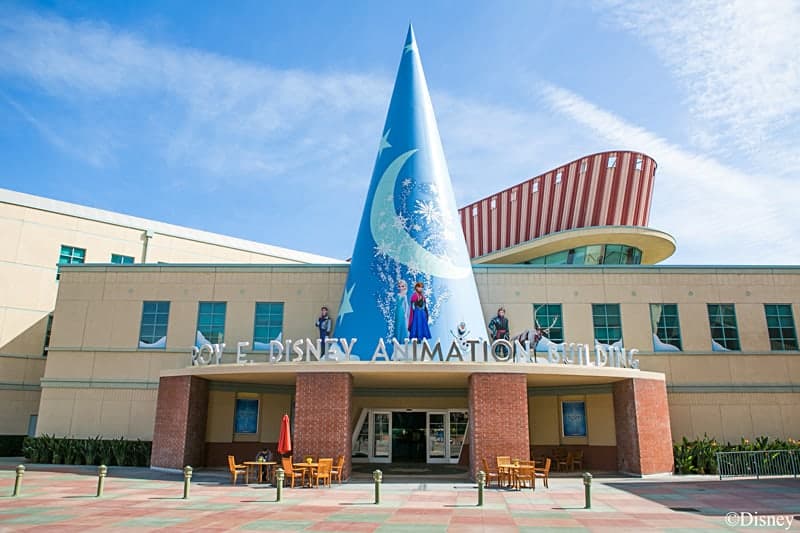 Did you know there are 312 characters that make up the kingdom of Arendelle from Frozen? While the population is quite small for a kingdom, there’s actually more characters in Frozen than in any other Disney film to date!

If you were surprised by this fact like I was, credit can generously be given to the wonderful and talented rigging team at Disney’s Animation Studios. Not only did it take a lot of time to make the film look so effortless and natural, but a significant amount of hard work as well. 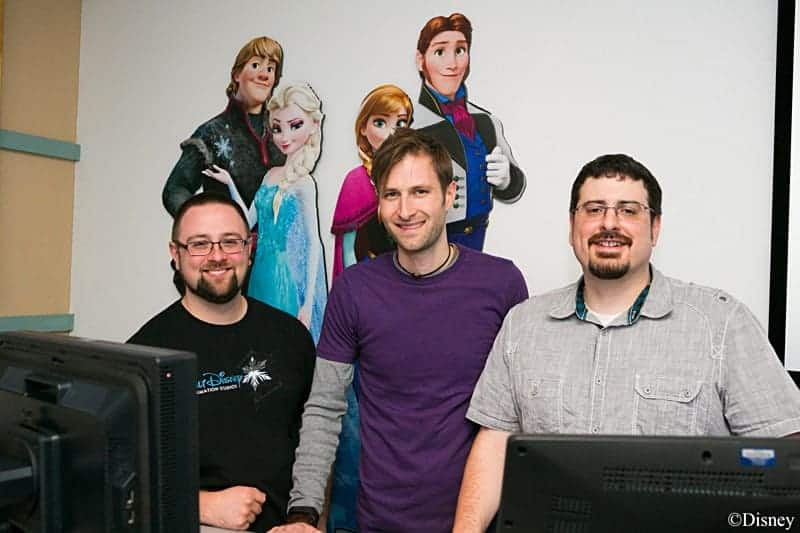 The process of rigging can best be described as providing motion to an otherwise lifeless animation character. “Without rigging, characters are nothing more than digital sculptures, they can’t move at all. It’s the riggers job to bring them to life,” character CG supervisor, Frank Tanner admitted.

In order to bring characters to life, riggers must literally build each ‘individual’ from the skeleton up. Beginning with a bone frame, the rigging team constructs a way to attach muscles and skin to each character, and then finally the expressions and clothing to make each individual unique. Imagine completing that 312 times! In addition to each character rig, 245 clothing rigs were created which is more than double the amount of all previous Disney films combined, and a new piece of software called Tonic had to be created in order to deal with constructing ‘tricky’ hairstyles of braids and buns.

Using Tonic allowed animators to pay respect to traditional Norwegian cultures, as well as provide Elsa with a legendary (and record breaking) amount of hair! “With really rich, voluminous hair that [Elsa] has, she’s got some great rigging going on, you can see the motion and simulation in her hair, which she has 420,000 hairs on her head. That’s about four times more than an actual person has, and way more than Rapunzel who only had about 30,000 hairs on her head. Compared to Elsa, she’s a little on the thin side,” Tanner laughed. 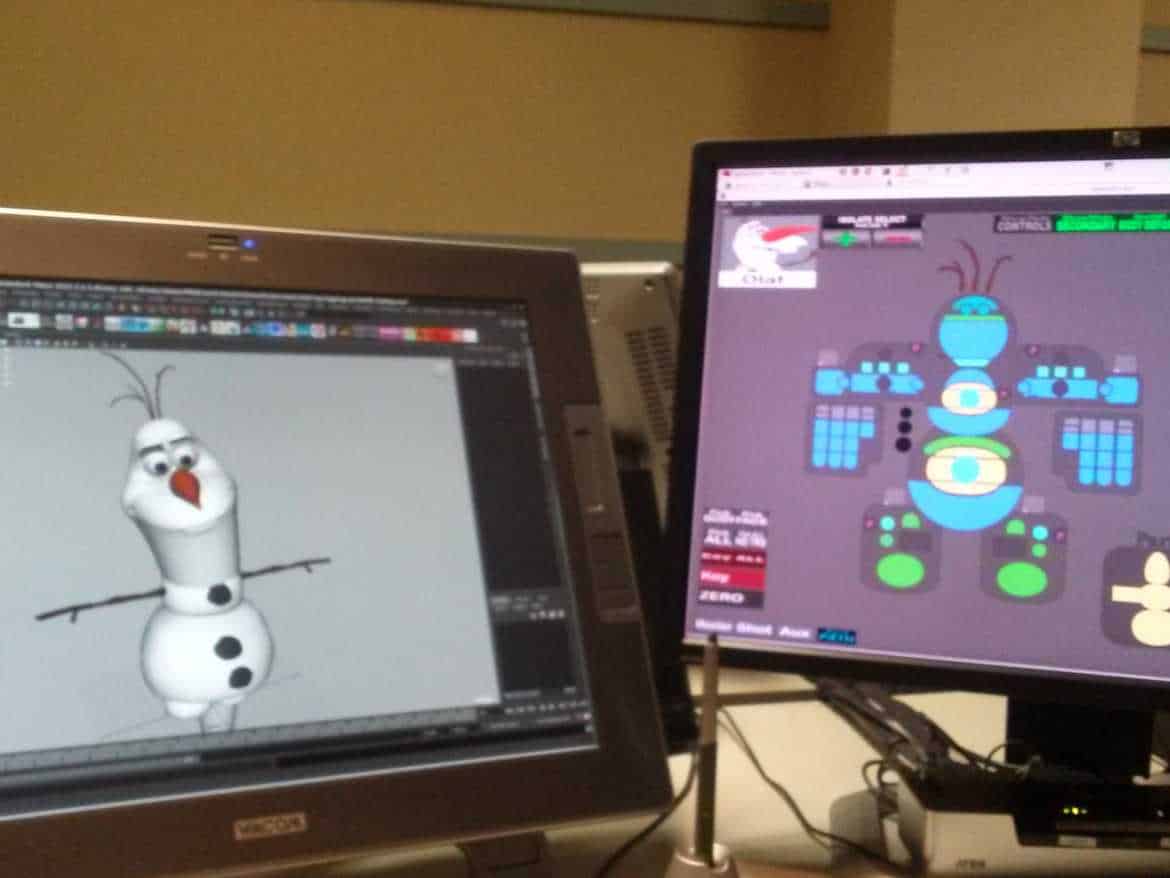 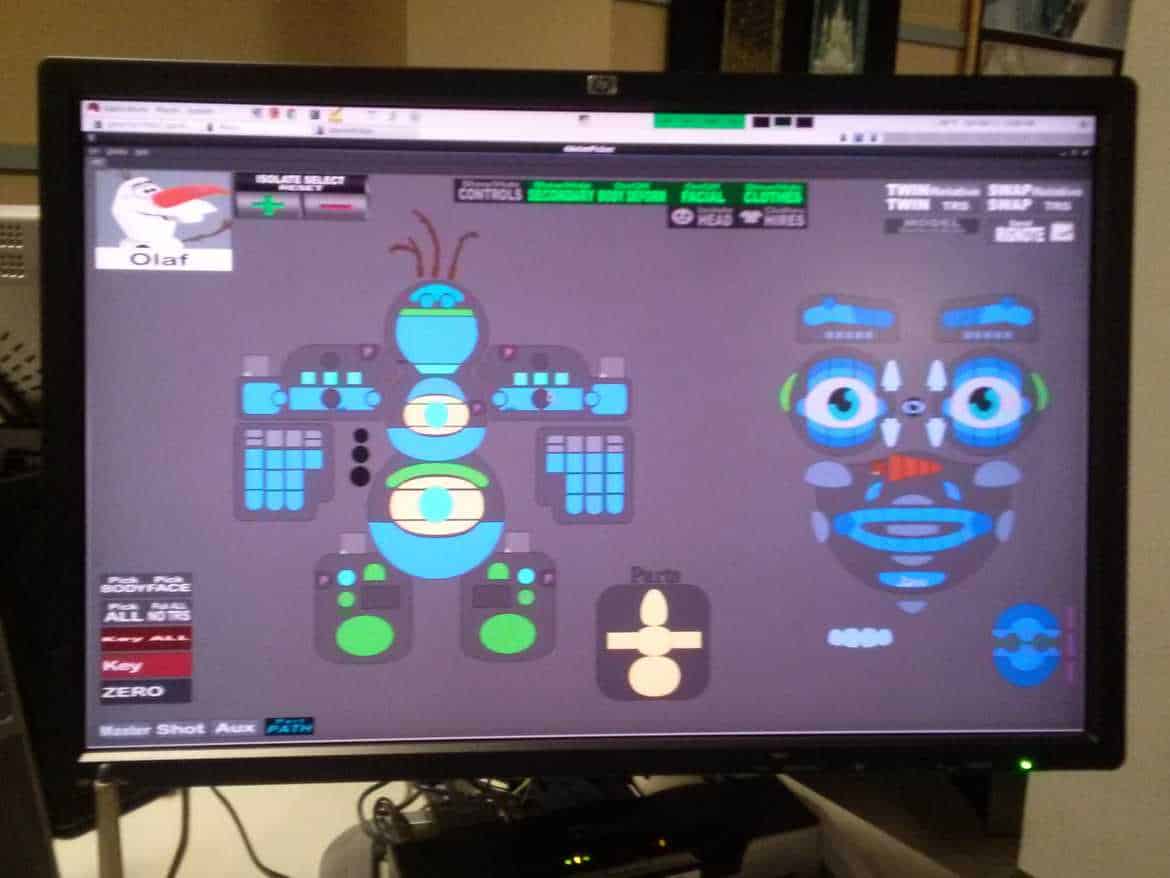 Another popular ‘hairstyle’ belonged to none other than Olaf, with sticks that make up his hair. A development project called Flourish allowed animators to achieve simple overlapping motion of things, so that they didn’t have to do it by hand. While sticks are typically straight in the real world, through Elsa’s magical powers in Arendelle and with the help of Flourish, Olaf’s hair was able to have a little bit of playful bounce to it, bringing his character even more alive.

“Speaking of Olaf, Olaf is a really fun character for us,” character rigging supervisor Greg Smith proudly included. “In rigging we have to balance the artistic appeal with a character so it doesn’t have a fish shape or a smile or a frown. So that’s got to do with a very technical approach of how you make controls that are easy for animation to use. Olaf presented quite the challenge, what does this snowman really look like when he’s smiling or frowning, what about when his nose falls off or melts, or assembles himself in different ways?” Smith pondered.

Luckily, the answer came in the form of a tool called Spaces. The program allows a very simple way of changing the relationship with different parts of Olaf’s body and to create different facial structures with minimal effort. 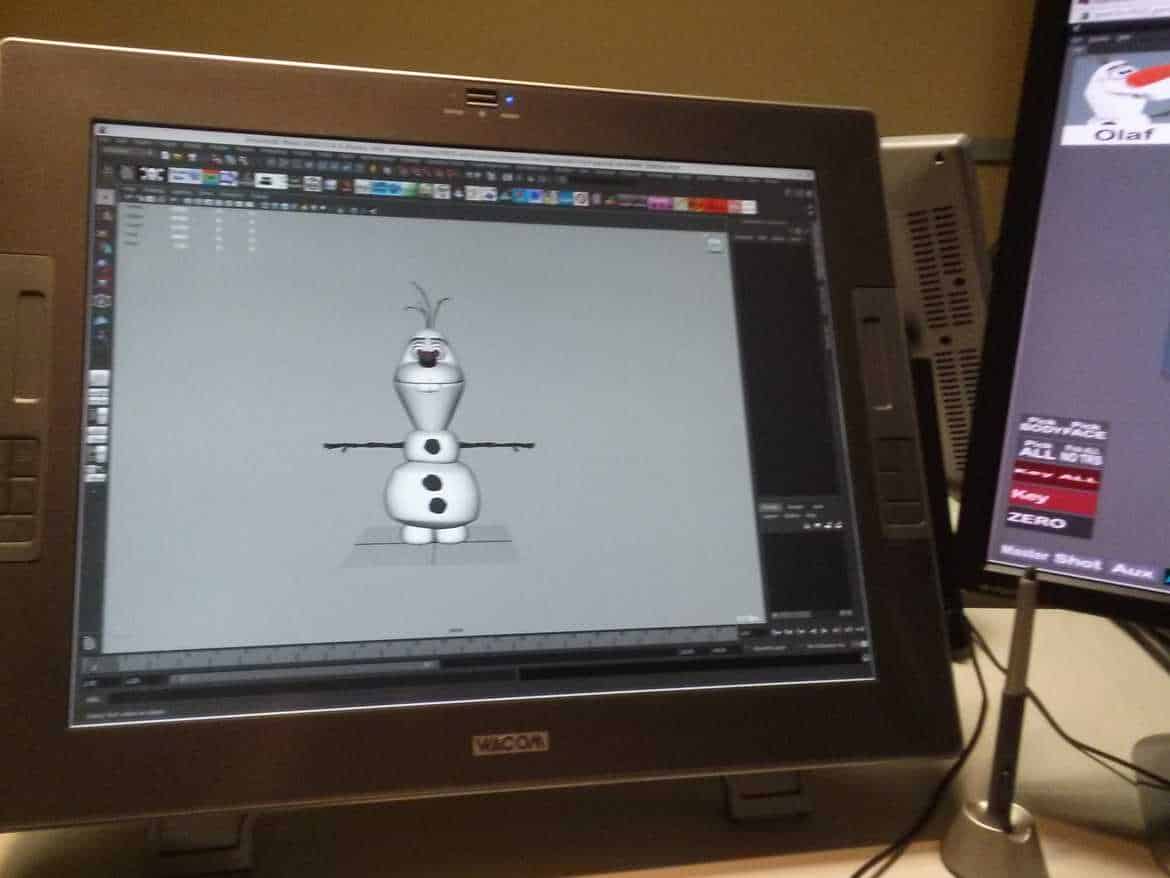 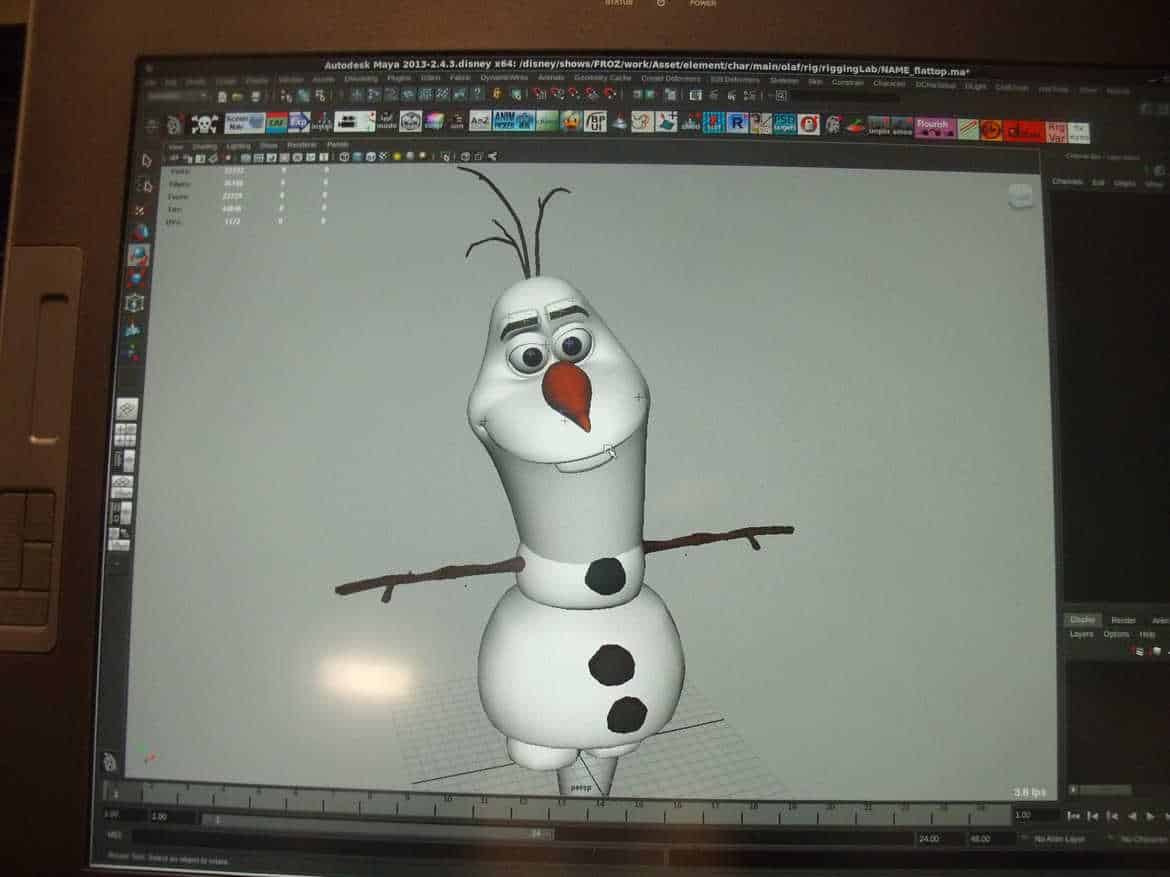 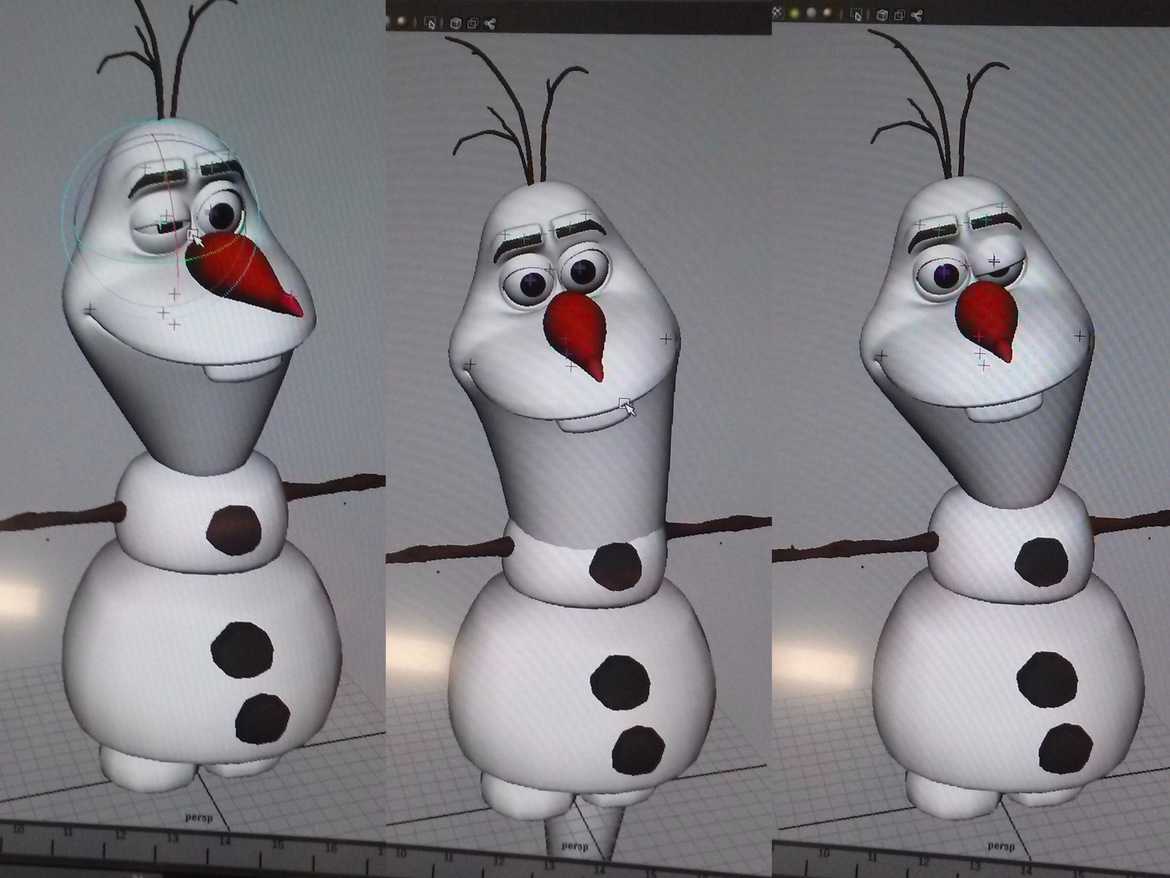 To test out how user-friendly Spaces is, the rigging team allowed Surf and Sunshine to test out the program on Olaf’s body and see how well we beginners could do! Using two connected computers, we were able to select a portion of Olaf’s body from the controller, and then click on his body to ‘teach’ Olaf how we wanted him to adapt. The process of opening and closing his eyes, to smiling, and other facial expressions were all controlled using Spaces and turned out to be a lot of fun!

Realizing that I could have Olaf adapt to any of my commands, the humor in me quickly came out as I found myself making Olaf have only one eye shut, or creating him with an extended neck. The process of using Spaces turned out to be an incredible look at what exactly goes into creating ‘life’ out of these characters and made me appreciate first hand just how much effort goes into making each of these characters lifelike.

To see all of Olaf’s expressions, as well as the rest of the character rigs, make sure to bring Frozen into your home by getting your own copy here!

Disney provided me with an all-expense paid trip to conduct this interview, but all opinions remain my own.

6 thoughts on “Behind The Scenes of Frozen: Meet The Rigging Team!”