Have you ever wondered where Shrek and How To Train Your Dragon were made? For years, I’ve been curious about what the mysterious halls of DreamWorks Animation looked like. As a Los Angeles local, I could tell you where half of the major studio lots are without needing a map, but DreamWorks had always been off my grid. Perhaps the studio was located through a password protected cavern, or 1,000 feet under the sea with a guardian monster. Instead, I found myself at the DreamWorks Glendale campus, just a hop over the Los Angeles River and across from Griffith Park. Through the gates, an impeccably groomed oasis was unveiled and I suddenly understood why DreamWorks has been able to turn out so many family favorites: I honestly thought I was at a golf resort of a workplace with the most relaxing campus ever. At any given moment, there are lots of under wraps projects in the works (like this summer’s How To Train Your Dragon 2 and fall’s Home), but a group of bloggers including myself were brought behind the curtains to check out Mr. Peabody & Sherman. I had been excited for the movie since seeing the trailer last year, and couldn’t wait to explore the campus while learning more about how the film was made. Before meeting many of the animators, producers, and director, I got to see Mr. Peabody & Sherman at the Campanile Theater. The movie was both adorable and giggle-worthy as the world’s smartest dog and his adopted son time traveled to places such as Egypt and France. Things became complicated when Sherman’s schoolmate Penny got herself tangled into sticky situations, but in the end, I left the theater smiling and wearing a pair of specs with a red bow tie.

Also read:  Everything you didn't know you needed to see STAR TREK BEYOND Production Designer David James guided me through the new design of Mr. Peabody, as well as how to draw the dog as he in animated in the feature film. He explained that many of the proportions were adjusted for people and objects to create a fantasy world where a character like a talking animal could exist. Plus, he guided us through a tutorial of drawing Mr. Peabody: start with a figure 8, use ovals for a snout and nose, a sharp triangle and two drops for legs and feet, and two teardrops for ears. Don’t forget the bow tie and thick glasses, and you’ve got yourself a Mr. Peabody! Over in the story department, Head of Story Walt Dohrn displayed a series of storyboards from the Egyptian scene of the movie, and demonstrated how he pitched the scene to director Rob Minkoff. Each sketch represented a second or two of animation, and to sell the idea, Dohrn voiced the characters. Nearly every drawing matched the scene in the movie, and it was easy to see why Minkoff gladly accepted the scene, which was full of both gags and old school comedic techniques. No day would be complete without a group photo in front of the gorgeous campus centerpiece fountain and Campanile Theater tower. I was sold on DreamWorks having the dream work environment when CEO Jeffery Katzenberg casually photobombed the center of our photo. How often do you get to say that happened? 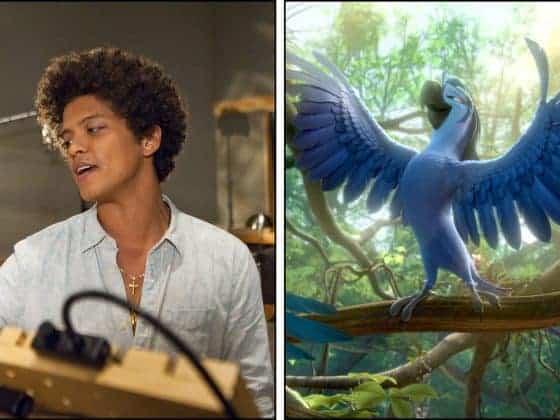 Bruno Mars in #Rio2? This Interview is for the Birds!