Celebrating the full-circle completion of Disney’s Frozen with the DVD and Blu-Ray Combo Pack release, the filmmakers were treated to a stay at the Hotel del Glace in Quebec City, Canada to see how their work influenced this year’s design.

Hotel de Glace is an entirely snow-built resort, that lasts from January to the end of March annually. This year, the property was entirely redesigned with the creative team working hard to add some of Frozen’s most well-known characters to the walls and focal points to offer magic and enchantment to visitors. 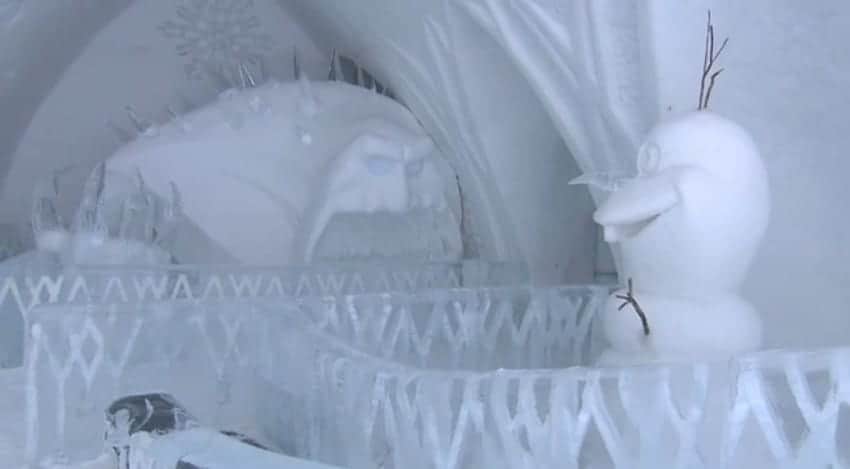 “We arrived at Hotel de Glace and I had no idea what to expect even though I had been working with ice and snow for years,” Walt Disney Animation Studios first female director Jennifer Lee laughed. “It is just stunning and they built this Marshmallow, our scary snowman, for real here and they could only fit half of him in  the room, he’s so big,” Lee added.

Marshmallow in addition to all the leads with Anna, Elsa, Kristoff and Sven are all found smiling throughout the property, with a life-size Olaf welcoming guests by the walkway.

“It’s very poignant to end at the Hotel de Glace, surrounded by ice and snow which started the whole thing and think of the emotional journey that we brought the characters on and the emotional journey we’ve been on, this has been one of the greatest experiences we’ve ever had and most intense, so I’m sure there will be a lot of tears as we say goodbye to this portion of it but yeah, what a great way to end the Frozen journey but to come back here,” Lee genuinely admitted.

While the 2014 Hotel de Glace ended on March 23, it will return January 2015 to offer guests the discovery of enjoying a fascinating frozen world. In the meantime, stay cool by purchasing Frozen DVD and Blu-Ray Combo Pack available now!

I received a complimentary copy of Frozen on DVD. All opinions remain my own.