The Minions are back and this time in a feature length film of their own. Admittedly, I have never seen Despicable Me nor its sequel, however it comes as no surprise that these adorable, gibberish-speaking, pill-shaped creatures warranted a spin-off prequel. From their various television interstitials to the teaser trailer for the film, how could you not want more? And while Minions certainly delivers on the silly gags and wacky antics, it does suffer a bit from a disjointed plot.

The Minions story begins at the dawn of time.  Starting as single-celled yellow organisms floating along to the tune of “Happy Together” by The Turtles, we see them evolve through the ages, perpetually serving the most despicable of masters.  Continuously unsuccessful at keeping these masters (…ahem…alive)—from T. rex to Napoleon—the Minions find themselves without someone to serve and fall into a deep depression. As a result, they retreat to an ice cave deep in the arctic.

But when one Minion named Kevin devises a plan, he—alongside teenage rebel Stuart and lovable little Bob—venture out into the world (now in the late 1960s) to find a new evil boss for his brethren to follow.

The trio embarks upon a thrilling journey starting with a hitch-hiking trip from New York City to Orlando for Villain-Con where the first-ever female super-villain, Scarlet Overkill (Sandra Overkill), is on the lookout for new henchmen. After Kevin, Stuart, and Bob land the coveted job (no surprise there) they find themselves in mod London where they must face an even greater challenge: steal the crown from the Queen of England and save all of Minionkind…from annihilation.

While all of that seems like that a hefty task for three semi-capable Minions, it doesn’t really amount to all that much in the long run. While the first 30 minutes of the film are fantastic, the remainder suffers from a rambling plot that seems to jump from one gag to the next without much concern as to whether it makes sense or helps drive the plot. The opening sequence where the Minions bounce from one despicable master to the next is easily the best in the film and cleverest idea. Also, early scenes involving the suburban Nelson family (voiced by Michael Keaton and Allison Janney) literally steal the movie. At this point story-wise, it feels like the movie has the potential to go someplace great. Unfortunately, once theMinions get recruited by Scarlet Overkill things quickly devolve into a game of “what zany situation can we put these Minions in now?” That’s not to say there aren’t plenty of laughs along the way such as the scene where we check up on the remaining Minions back at the ice cave and find them playing a less-than-enthusiastic game of soccer. But their stimulus famine somewhat mirrors the audience’s feeling of being intellectually turned off. Well maybe not the entire audience, but at least those who are actually taller than a Minion. 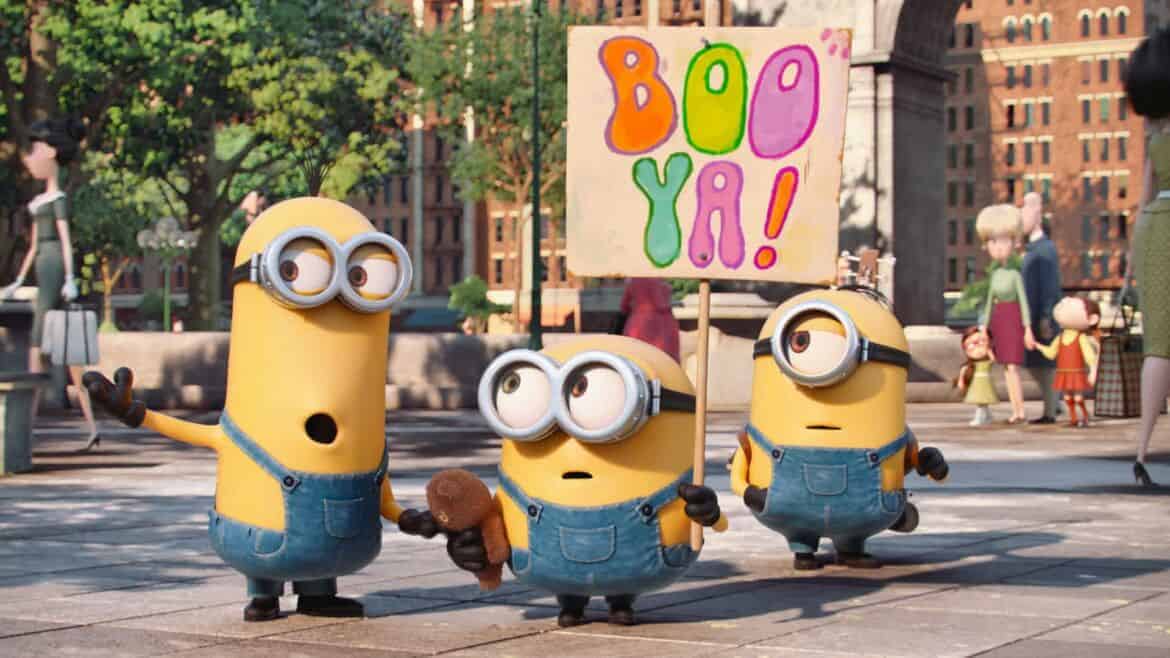 After being emotionally pummeled and intellectually jolted by Pixar’s Inside Out, it’s hard not to hold other animated films to the same standard of excellence. And just to be fair I’ll say Dreamworks’ How to Train Your Dragon films do manage to meet those high expectations. So why not Minions? I guess its because Illumination Entertainment and Universal Pictures wanted to capitalize on these fan-favorite characters, give them more screen time, and deliver lots of laughs and silly scenarios for a family audience to enjoy. To that I say, “Mission Accomplished!” I certainly laughed as did the audience I was with. And I’d be lying if I didn’t say I wanted a picture with the Minions both before and after the film (you can see them on my Instagram). Was it a cerebral film that I could talk about at length? No. Was it 90 minutes of silly family fun? You bet! At the very least parents will enjoy the handful of classic 1960s songs regardless of whether they “Bee-Do” or “Bee-Don’t”.