If there are flying monkeys and talking china dolls, you must be in the magical land of Oz. In Disney’s “Oz the Great and Powerful“, the wizard, James Franco, befriends a miniature china doll (voiced by Joey King) and Finley the flying monkey (Zach Braff). 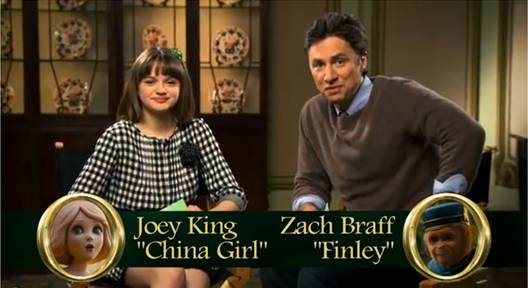 When Joey King, was only four years old she starred in a national commercial for Life cereal. At just six years old, in her first film “Grace”, she had to pretend to almost drown in the ice cold ocean. From that moment on, Joey was hooked on making movies. When she was 9, Joey has her first lead role as the often mischievous Ramona Quimby, in “Ramona and Beezus”. And at 13 she set her eyes on a role in a Disney film.

As a huge fan of “The Wizard of Oz” she was really excited to audition for the role of China Doll in “Oz the Great and Powerful.” Now as a teenager, the 13 year old is still in love with her job. Who was her favorite character in the new Oz flick? Finley the monkey of course!

Zach Braff’s first major role was as John “J.D.” Dorian on the  2001 TV series “Scrubs.”  His work on the show earned him three Golden Globes nominations and an Emmy nomination. In 2004,  Braff wrote, directed, produced, and starred in “Garden State”. As the writer and a New Jersey native, some of the scenes in the film were exaggerations of Braff’s personal experiences.

Zach Braff says he grew up watching the “The Wizard of Oz” and loved it. He loved the physical comedy, way that the characters like the Tin Man and the Lion moved ,and just thought it was so intoxicating and fun. He spent most of his time on the set of “Oz the Great and Powerful” wearing a blue onesie and scrunching down so he wouldn’t be more than 36 inches tall.

In this clip, Zach Braff and Joey King interview each other by asking and answering 10 questions in only 60 seconds. Watch the interview to discover the answers to whether: Magic is just a trick or the real deal?; Is the best way to travel via hot air balloon or magic bubble?; Who is more powerful witches or wizards?; Is Oz a wizard or a wise guy?; What’s more effective spells or tricks?

3 thoughts on “Flying Monkeys, China Dolls and 10 Questions in 60 Seconds”