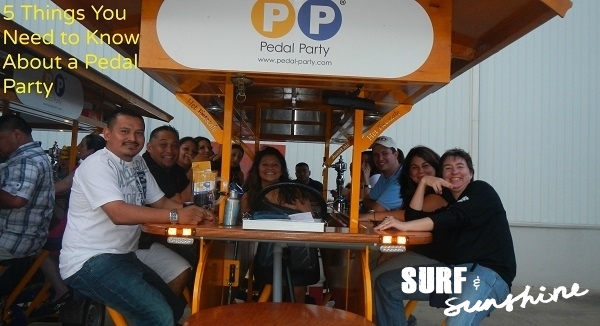 When a group of Houston bloggers asked me if I wanted to party with them, I immediately answered “Yes!”, followed by: when and where? I had no idea those simple questions would lead to at least a dozen more. I mean, have you ever heard of a “Pedal Party” before? Turns out pedal parties are one of the hottest trends in pub crawls right now! 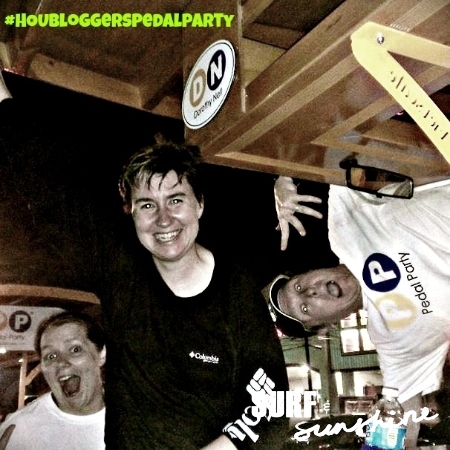 1. What is a Pedal Party? A party bike, that holds up to 16 people, (15 seated and one “bartender” that stands in the middle and serves your drinks and cheers you on, ours even danced) This is no average bicycle,its about the size of a cargo van and travels at an average speed of between 5 and 8 miles per hour. Um…okay so according to our fantastic driver & captain Nate, we were going about 3-4 miles per hour. (not from lack of effort I assure you)Oh and the bike weighs around 2200 pounds, and will crush bones, after hearing that I found myself holding on a LOT! Most fun you’ll ever have biking 4 miles!

Tip: You’re actually doing the pedaling, and while flip flops may look cute, they can make pedaling a little challenging.

2. BYOB! Bring your own beer, cans or a keg, you can also bring wine, but NO glass is allowed. My awesome friend and +1 for the evening, Sherri, packed a soft sided cooler for us with ice, Texas craft beer from Southern Star, and bottled water! I am so grateful she thought to bring water. Even though the sun had set, temps in Houston were still in the 90s when we started pedaling, and by the time we made it to Christian’s Tailgate, our first stop, I was overheated! Its important to stay hydrated so you don’t miss any of the fun!

They provide the music, and our playlist covered all the bases. A little bit of “I Gotta Feeling” from the Blackeyed Peas, “Oppa Gangnam Style”, lots more high energy music, and we wrapped up the ride with a raucous sing a long to “Sweet Caroline.”

Tip: You can request a specific driver, we had Nate, and Stephanie was on the other bike. They’re both a riot, but Nate has moves like Jagger! 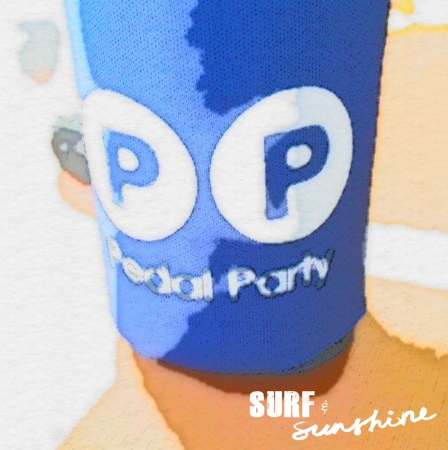 You’ll have to “wrap before you tap” (direct quote from driver Stephanie) your beer, so the beverage is legal, but Pedal Party has some awesome “beer condoms” (the Pedal Party nickname for koozies)!

3. Dress to  You’re on a bike in Houston, dress for comfort and performance. Sure, its a pub crawl and the people at the bars may be stylin’, but you’re having more fun! Sneakers have more traction on the pedals than flip flops, silk does not look pretty when you’re sweating, and a dress is not practical on a bike! Think cool, comfy and practical. 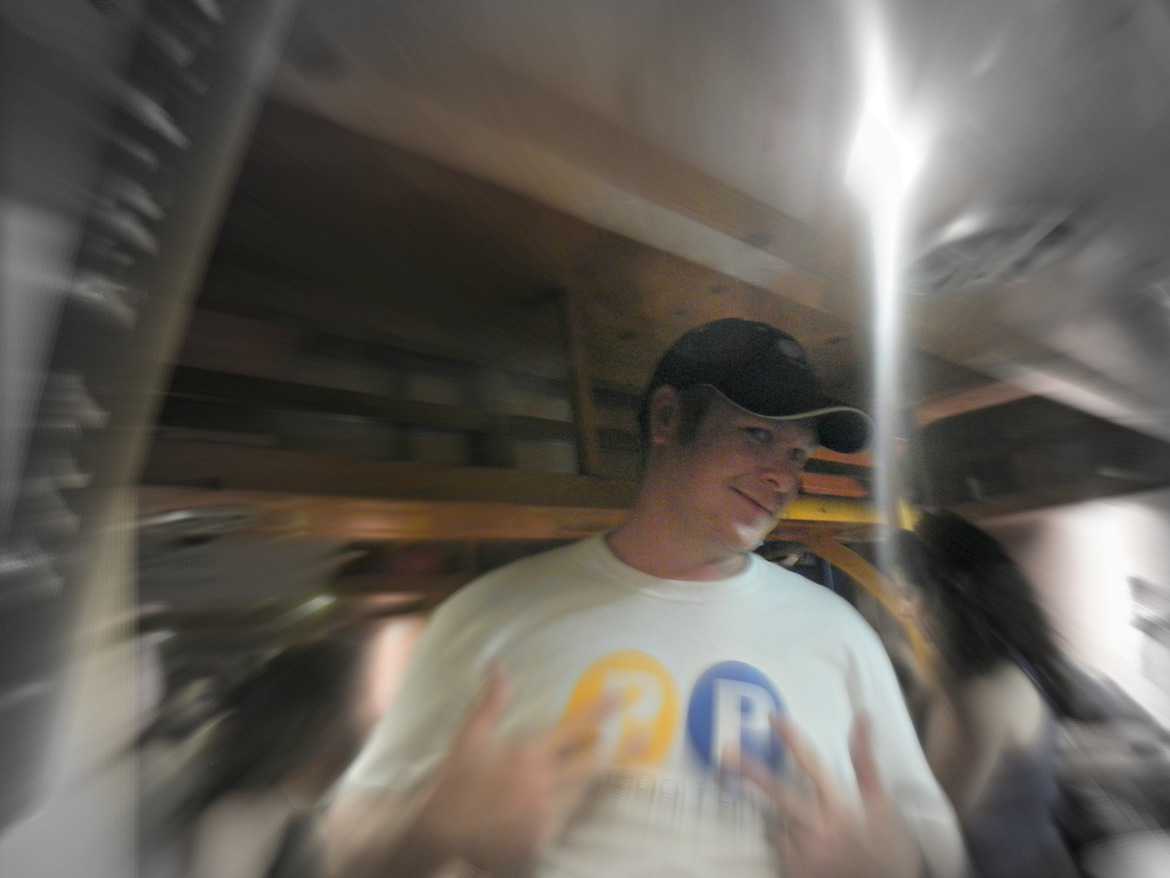 4. Bring Cash On our Pedal Party we made three stops, Christian’s Tailgate, Porch Swing Pub, and Liberty Station. You have the option of going in the bar and just hanging out, standing around the bike and being social (without your drink, unless you are on the bike), or drinking while at the bars! But here’s the thing, you’re only at each bar for a little while, so make life easy and pay cash when you get your drinks, so you don’t hold up the party while waiting for your tab! Also, you’re going to want some singles to wave at your dancer, I mean driver, when he’s grooving. Okay, I’m kidding, but if your driver is as fantastic as ours was, you’ll want to have some cash for a tip!

Have a sense of humor, the Pedal Party t-shirts say “my PP is bigger than yours.” This party is all about having fun, while staying safe. 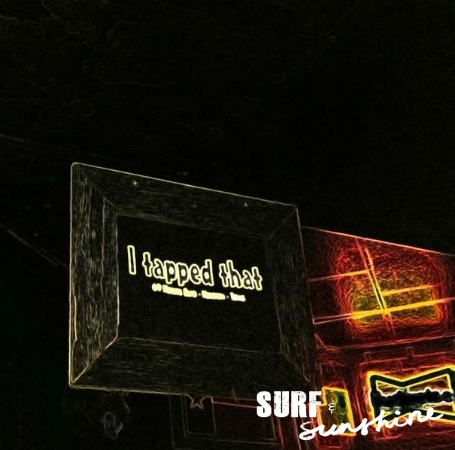 5. Bathrooms, Bartenders, and Strategy First, near and dear to my heart, there are NO bathrooms at Pedal Party headquarters (wish I’d known before drinking a few beers).  With 16 seats, there are 10 pedalers and 6 seats that don’t have the option to pedal. So, if you have an injury, health issue, or would rather serve beer and cheer, plan accordingly when choosing your seat. You’ll either want the back bench, volunteer to tend the bar, or grab one of the two seats without pedals. Alba, from Independent Mami was our bartender, and amazing cheerleader! She kept us entertained and motivated throughout the four mile trip.

Pedal Parties are great for a group of friends that want to have fun and do something different, birthday parties, team building, or even wedding parties!

You can see some of the new friends I made, and my photo bomb appearance over at Charm and Sass You can see more photos and some of the fun we had on Instagram, Twitter, Facebook and Pinterest at #HouBloggersPedalParty!

Hello Houston! Media bloggers who attended this event are joining together to give away a 2 Hour Pedal Party and a Little Soya Prize Pack

A Texas size thank you to our awesome sponsors: Pedal Party for the complimentary ride and Little Soya for providing beer and snacks.