This Puerto Rican Sofrito recipe is a flavor bomb of peppers, onions, garlic, cilantro and oil blended together to make a sauce or puree. It freezes well and believe me, you’ll want to use this on everything!

My favorite thing about travel is experiencing the local culture, especially through food. Puerto Rico is one destination that my stomach grumbles for joy over for exactly this reason. (Read about my Puerto Rican cuisine tasting adventure).

Puerto Rico has historically been a stopping point for many on the way to or from somewhere, resulting in an amazingly diverse population. This melting pot of cultures has resulted in a unique and delicious blend of food and flavors.

One stop on my San Juan food tour was the San Juan Water Beach Club Hotel in Isla Verde. I had the pleasure of meeting Executive Chef Raul Correa, and spent the afternoon learning to make some of his traditional Puerto Rican Christmas Recipes.

To this day, this meal is easily remembered as one of THE BEST meals I have ever had.

Sofrito is derived from a Catalan word sofrier meaning to gently fry. Sofrito is absolutely essential in all Hispanic cooking. An aromatic blend of vegetables, herbs, and spices, sofrito can be used to flavor meats, rice, beans, fish, and stews.

Whether in Cuba, Spain, the Dominican Republican, or Puerto Rico, there will be a sofrito recipe that is passed down from generation to generation. There will always be some in the fridge or freezer.

A lot of times, sofrito is used as the base of a recipe (like Arroz con Gandules). But it can also be used as a sauce or topping at the end. I use it like this for just about everything – it’s THAT good. I’ve even been known to put it on my popcorn!

These are some common ways you can use sofrito:

Why are there so many different sofrito recipes?

Sofrito recipes vary not only from region to region, but also family to family. Everybody uses their Grandmother’s secret recipe handed down over many generations. But in general, you can expect sofrito to be similar within a culture.

For example, Dominican sofrito, called sazon, usually includes vinegar and annatto while Spanish Sofrito has a tomato sauce base, olive oil, onions, garlic, herbs, and peppers. Brazil’s variation on sofrito, called refogado, is one of the simplest with just salt, oil, onions, and garlic puréed together and then lightly fried.

Lucky for me (and you!), Chef Raul was kind enough to provide his own family’s “Secret” Puerto Rican sofrito recipe. I share with you at the bottom of this post!

Does this Puerto Rican sofrito recipe have hard to find ingredients ?

Chef Raul calls for a few ingredients that may be hard to find where you live. They can usually be found in Latin or Asian grocery stores, but here are some more common substitute suggestions you can use instead.

Culantro leaves (aka recao) – Culantro is an herb commonly found in the Caribbean and Central America and used used in many Puerto Rican dishes.

Some people also refer to it as Puerto Rican coriander, black Benny, fitweed, or spirit weed. Asian stores may have it as “sawtooth coriander”. If you can’t find culantro, don’t worry – just double the cilantro to two bunches (or cups), instead of just one.

For no added spice, you can substitute with a small yellow or red bell pepper. If you like a little bit of heat, use an Anaheim chile. If you like spice like I do, switch this out with jalapeno, serrano, or even habanero!

Ajíes dulces pepper – a small, mild Caribbean pepper that looks like a habenero, but is actually sweet.

Aji dulce peppers have a bit of smokiness which is hard to get in a substitute but these are getting increasingly difficult to find so you can substitute them for Mad Hatters or even easier to find mini sweet peppers.

Can I freeze sofrito?

Absolutely! You can freeze leftover sofrito for use up to a year. I recommend freezing it in small 1/4 to 1/2 cup portions, or even better in a silicon ice-cube tray.

You can keep them in the tray with the lid, or, once frozen transfer them into an air tight freezer bag. Having them in small cubes is really convenient and my preferred freezer method.

Mix all ingredients in a food processor or blender. That’s it – couldn’t be easier!

If you love Puerto Rican food, you NEED to try Chef Raul’s Puerto Rican Pernil Adobo Recipe too. Be sure to drench it in some sofrito sauce before serving! 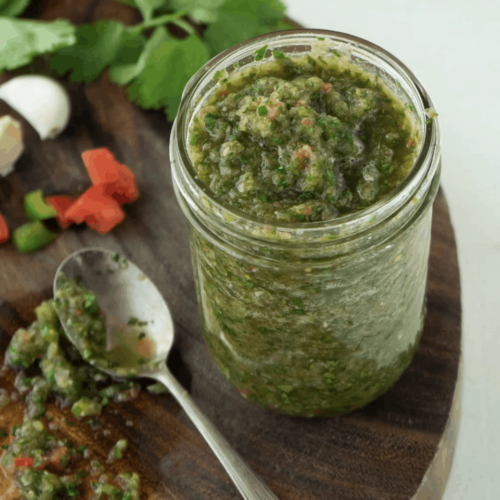 This Puerto Rican Sofrito recipe is a flavor bomb of peppers, onions, garlic, cilantro and oil blended together to make a sauce or puree. It freezes well and believe me, you'll want to use this on everything!
3.78 from 9 votes
Print Recipe Pin Recipe
Prep Time 10 mins
Cook Time 0 mins
Total Time 10 mins
Course Condiment
Calories

Keyword gluten-free, keto, low carb
Tried this recipe?Let us know how it was!