The Roman Empire is an iconic civilization centered around power and brutality. Even today, thousands of years later, people are fascinated by the Roman Empire and its accomplishments. The Romans ruled the world stretching their reign all over Europe and into Africa and the Middle East. They represented an unflinching determination and force that led them to the many victories of a lasting empire. During their reign, the essence of Roman culture blossomed and carried through the centuries influencing societies in many aspects. The power, strength, and riches of the Roman world was unmatched by other civilizations. 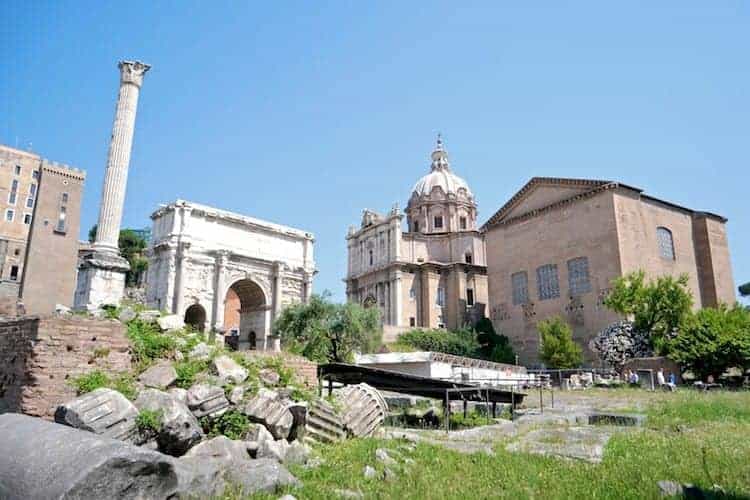 As an optional part of my Espresso Italia tour with Topdeck Travel, we visited several key Roman sites, like the Colosseo, but at the center of Roman life was the Forum. It was the hub of activity in ancient Rome, located between the Palatine and Capitoline Hills, marble buildings stretched skywards with massive columns and beautiful arches. It was the political, religious, and social heart of Rome where elections were held and the Senate came together. Temples were erected and dedicated to the gods and the people worthy of becoming a deity. It was believed that building a temple in dedication of a mere human made them a deity and Julius Caesar was the first to receive that honor.

The Temple of Caesar once stood in the forum inviting worshipers in to honor the great Julius Caesar. While it was actually Caesar’s nephew that was the first emperor of Rome, Julius Caesar was a general and statesman that had fought in many wars. Eventually, he stepped into the politics of Rome and became Dictator of Rome only to be killed in a coup. His reform of Rome had been popular among the lower classes, but the Senate was wary of his growing power. Cassius and Brutus plotted his death to put a stop to his reign. Caesar’s death turned him into a martyr and mobs of lower class citizens attacked the homes of Cassius and Brutus after Caesar’s funeral. In Caesar’s honor, he was the first Roman to be defied and the title “The Divine Julius” bestowed upon him from the Senate. Today, only the altar still stands from The Temple of Caesar.

Other fragments of the great buildings still remain today, calling to mind the power and resilience of the Roman Empire. Six granite columns from the Temple of Saturn stand proudly among the ruins of the forum. In this Temple, dedicated to the god of seed-sowing, the treasury was housed as well as those that controlled the finances of the Republic.

Built in 203 AD, the Arch of Septimius Severus was a symbol of victory. It was built after the Romans defeated the Parthians. The substantial size and elaborate decoration is testament to the typical pride of the Romans.

The Curia Julia was commissioned by Julius Caesar but completed under the rule of the first Emperor Octavian (given the title of Augustus). Meant to replace the original Curia that was burned during riots, the Curia Julia was the Senate House. Here, the Emperor met with the Senate to discuss important matters of state. Because of renovations throughout history and the frequent repurposing of the building, the Curia Julia is one of the few buildings that survived with much of the structure still intact.

The Via Sacra (sacred road) can be found within the forum. This is where Emperors would stride as they made their way to the official ceremony marking their induction as the new leader. It is also the road that armies took back into the city as they returned from war.

Many of Rome’s Emperors allowed excess to be their downfall, pulling Rome down into the depths of chaos. However, those men rarely lasted in the world of Roman brutality. The Emperors that thought broadly and fought fearlessly brought growth and new life to the Roman Empire. Rome’s history is characterized with the hills and valleys of growing pains until it fell and with it a history rich in culture, politics, extravagance, and ruthless violence. The artifacts left behind tell the story of an ancient world built on the might of men. Among the ruins of a once great society is the eerie realization that even the powerful shall fall.

Thank you to Topdeck Travel for having me as a guest on the Espresso Italia tour. All opinions remain my own.

30 thoughts on “All Roads Lead to Rome”