Growing up as a kid in San Diego, I can remember begging my parents to take me to the San Diego Wild Animal Park. I actually can’t recall ever visiting, but whenever I drive anywhere near Escondido, I always think of what lies nestled in those hills. Renamed in 2010, the San Diego Zoo Safari Park is the lesser known sister property to the world famous San Diego Zoo. At a whopping 1,800 acres, it’s been an incredibly successful animal sanctuary and breeding grounds over the past 40 years. The facility focuses on conservation efforts and offers it’s animal residents large open expanse to roam in their “natural environment” and also boasts the world’s largest veterinary hospital. 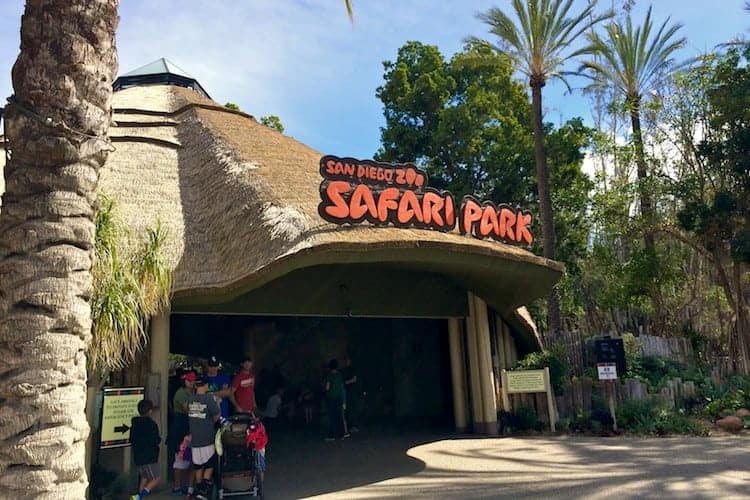 Aside from walking along paved pathways, The San Diego Zoo Safari Park also offers families the chance to get up close and personal with animals in their habitat. The Africa Tram is included in your paid admission and provides a tour of the Asian Savannah and African Plains. You should definitely plan on hopping aboard for a nice break from walking and also to get a small glimpse of what it’s like to be on a safari. 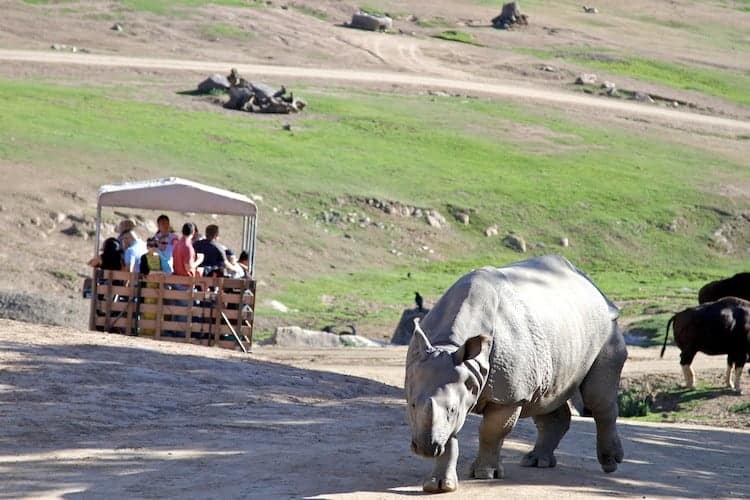 If you’d like to upgrade your visit, you can choose from a variety of tours to suit your interest and budget. From a 1 hour Cart Safari tour around African Plains or Asian Savanna, to a ride on the longest zip line (2/3 of a mile) in the contiguous United States via the Flightline Safari over animal exhibits, you won’t be disappointed!

Did you know there’s more to the Safari Park than most guests see? When you choose a behind the scenes safari you will go off exhibit and off the beaten path for an inside scoop on how the animals are cared for, enclosures are designed, and a better look at how the zoo carries out conservation and research work here in San Diego and around the globe.

I was so excited to be able to take Whistler to check off a childhood bucket list item that I wanted to make our visit extra special. We chose to take the 2 hour Jungle Journey Behind the Scenes Safari and highly recommend the experience. We met our tour guide at a designated location and hopped aboard a 10 person golf cart for our journey. We headed straight out to one of the highlights of the tour, an up close encounter with the giraffe of the jungle, an Okapi. 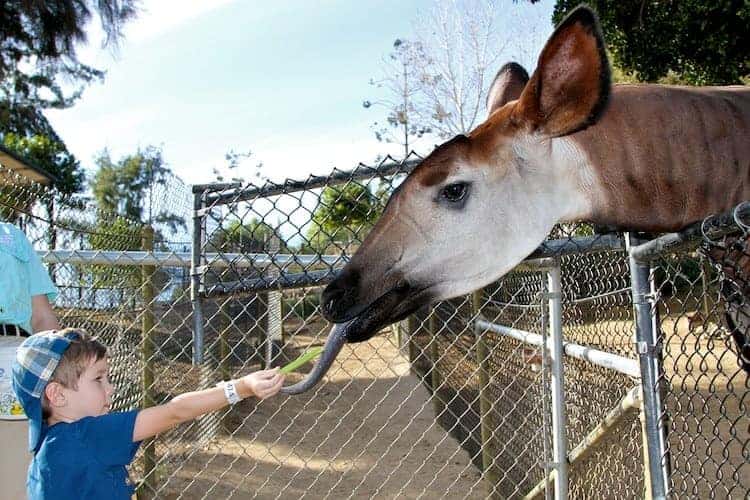 We took a few minutes to learn about the Okapi and how we can do our part to help in their conservation efforts before getting the opportunity to feed these mysterious animals.

The forests where the Okapi live are affected by coltan mining. Coltan is a mineral used in all cell phones so we can do our part to help simply by recycling our old phones!

From there, we drove by the Balloon Safari (take a 10-12 minute ride up to 400 ft for an extra fee) on our way out to Africa and Asia. 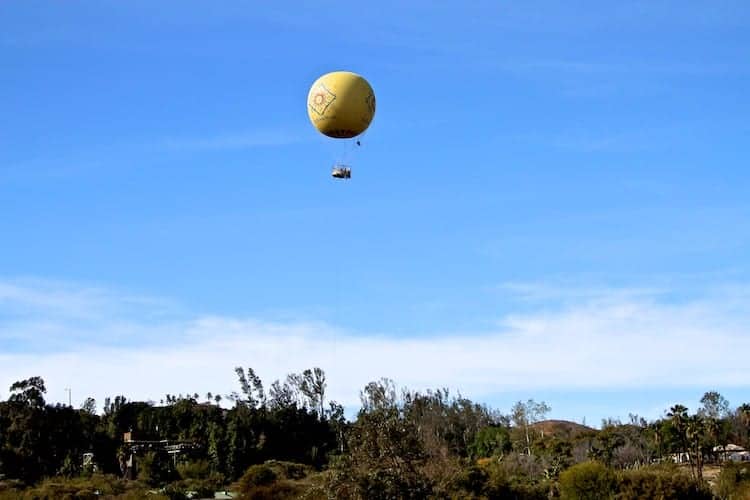 We saw a huge variety of animals just being, well animals, out on acres and acres of land. It was incredible! Whistler and I have visited many animal parks and zoos and have never seen this many Rhinos. We found out the reason why is because the San Diego Zoo Safari Park actually has the world’s most successful breeding program for Southern white rhino!

For those of you that love Giraffe, the Safari Caravan experience looks like a blast as well. We saw one of the trucks as it stopped to feed the Giraffe and Rhinos and I was a bit jealous. 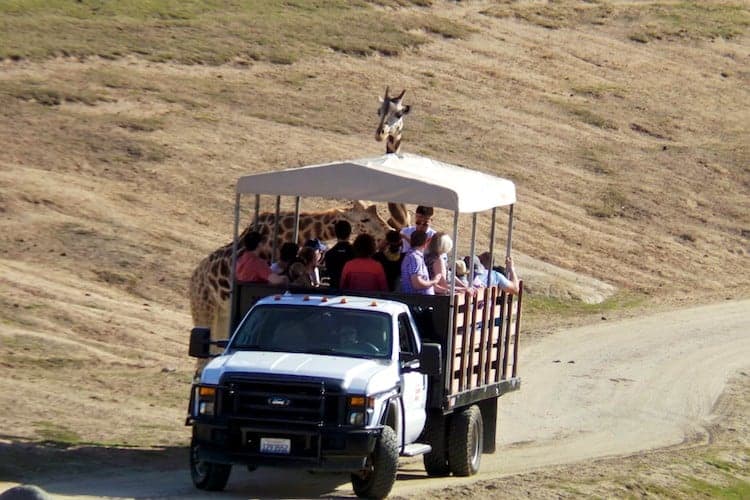 Right around the corner we made a stop for our second animal encounter – the tigers. Although we checked a few different off exhibit enclosures, unfortunately, we were out of luck and the tigers avoided being seen. No worries though because we had a nice viewing of the King of the Jungle as he enjoyed the sun. 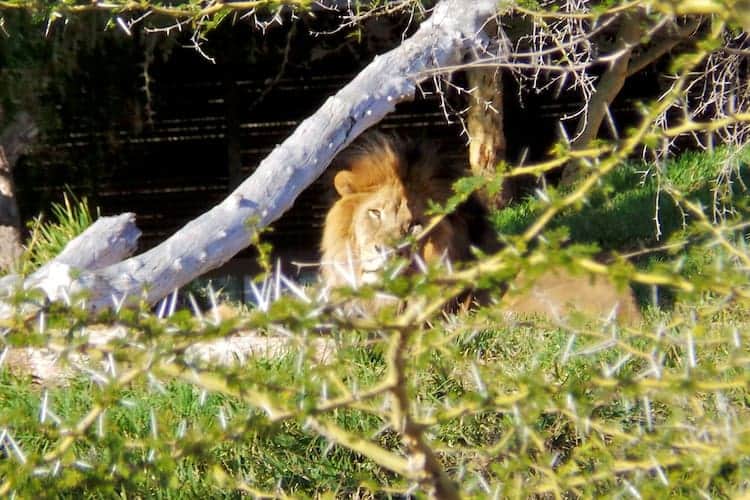 The third and final stop of the tour was at the Education Compound to meet a surprise animal ambassador – Luna, the Anteater. 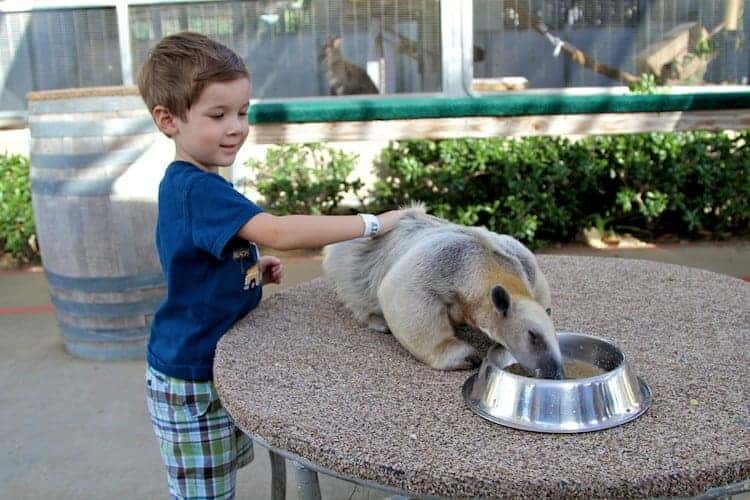 Whistler was thrilled to get a chance to pet Luna during an open Q & A session about Anteaters. We learned that they have a prehensile tail that can be used for balance and gripping. It is also interesting to note that the muscles in their hands in the “relaxed” position are closed. This is how they are able to sleep hanging from a tree and also why they walk on the sides of their fists while on the ground.

In addition to offering a unique way to see your favorite animals, park admission includes access to a variety of animal shows. They are a great way to learn more about the animals and many of them offer a chance to interact with animals and/or their keepers. For instance, Training Talk offers the chance to get an up-close look at free-flight bird training and once a day at Shiley’s Cheetah Run, the only place in America where Cheetahs run OFF LEASH at full 70 mph! 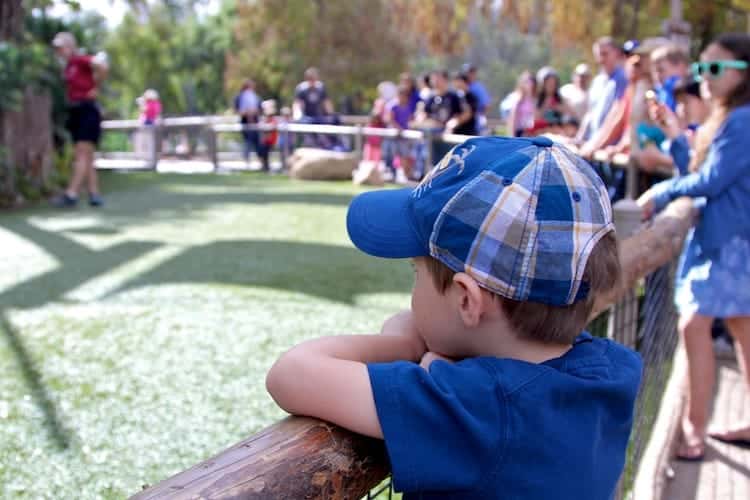 Our favorite parts of the day were stopping by the Animal Encounter locations throughout the park to learn about and see varies species up close. Our first encounter was with a Fossa. An unusual creature that is only found on Madagascar, it appears to be a mix between a cat and a mongoose. 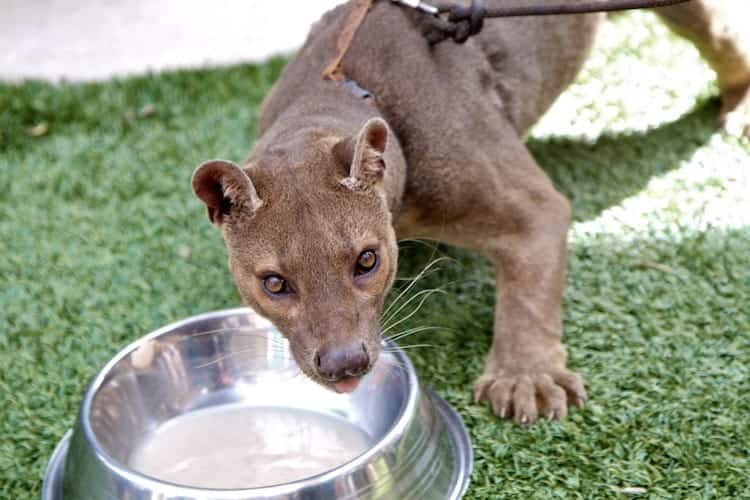 We watched her play, climb, drink and play some more and then were surprised to learn that she is completely blind! Abandoned by her mother due to the birth defect, she was raised by hand and has a permanent job being one of the San Diego Zoo Safari Park’s animal ambassadors. She is actually one of only 4 fossa’s known to work on a leash in this manner so it was a privilege to get to meet her! 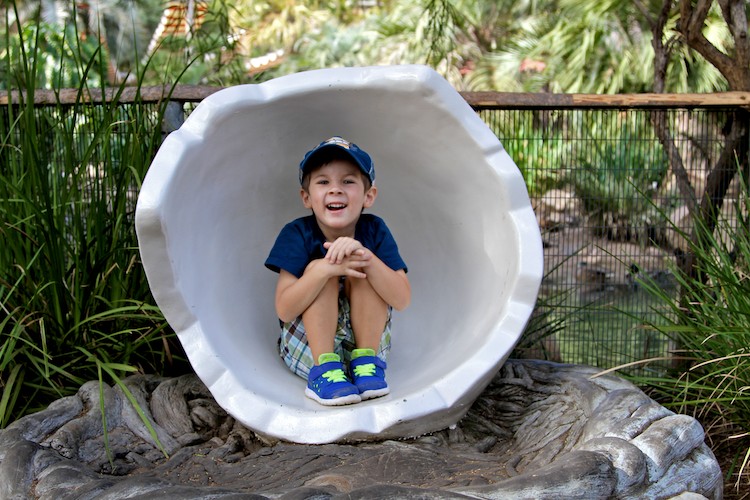 Taking on the park alone with a young child was more aggressive than I had thought. Luckily, we already had the really large part of the park taken care of since we took the Behind the Scenes tour. So we took our time meandering around the Gorilla Forest and Nairobi village for the rest of the day.

The gorilla enclosure was one of the largest I have ever seen and it had about 6 or 7 gorillas, including 2 babies! The large silverback walked around for a bit but mainly spent his time doing what boys do best – rolling around in the grass and pondering what his next move will be.

The Petting Kraal was full of sweet goats so we grabbed a brush and spent a good amount of time grooming. Whistler got a kick out of learning their names and trying to speak to them in “goat”. baaaa! 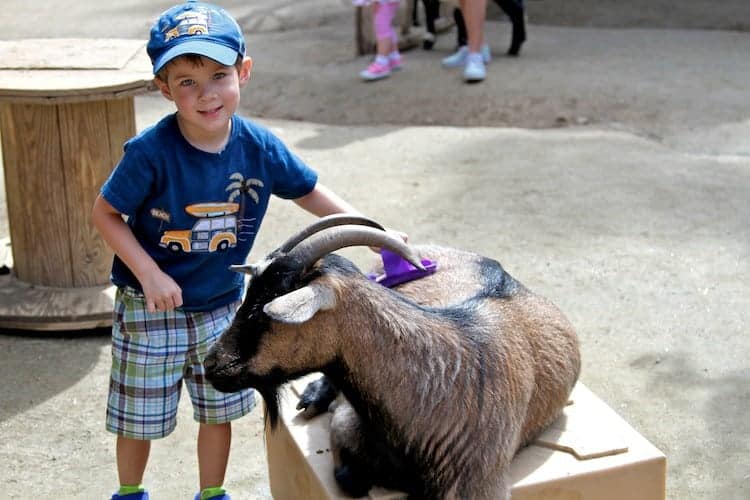 The nursery had two baby lion cubs that I just wanted to hug, but of course had to settle for ooing and ahhing at instead. 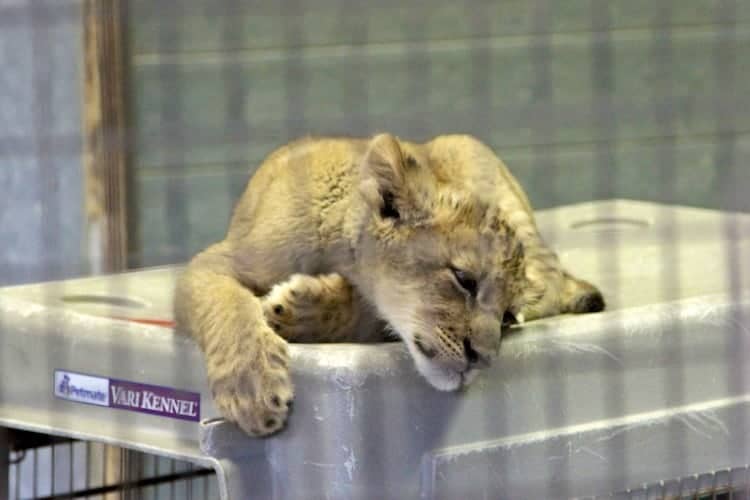 Always fun to watch are the antics of the meercats. Always looking off into the distance, what do you think they are thinking about? 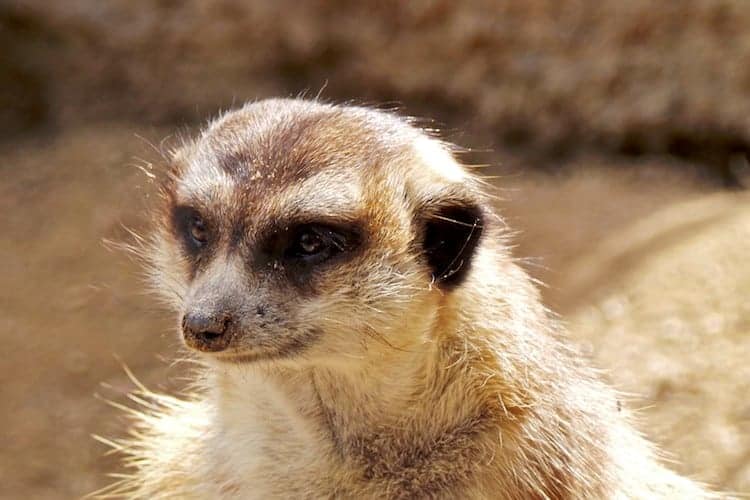 Don’t forget to stop by Wings of the World. We had quite a few up close visits by the beautiful large birds that live in there. They were really curious and had everyone laughing. 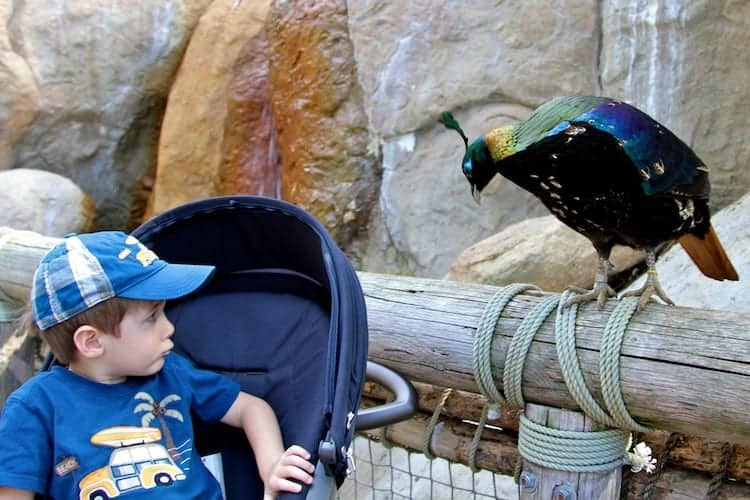 As our tired feet started telling us to make our way for the exit, we got a great glimpse of a mother flamingo feeding her baby. 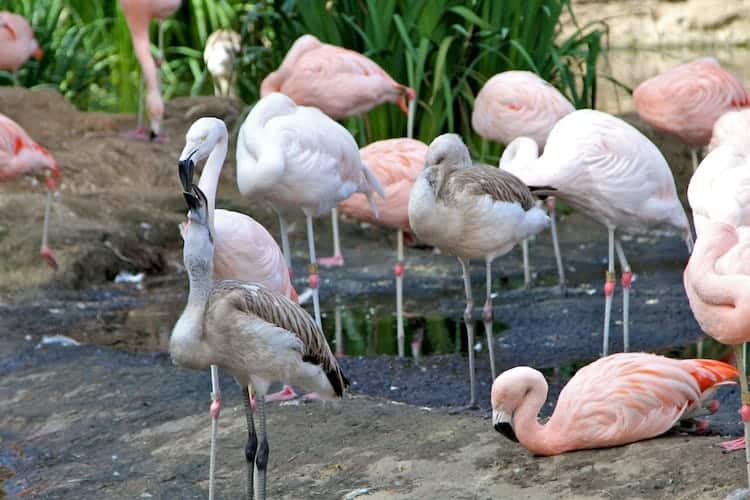 Here is a fun fact for you – notice how the baby is brown in color? Flamingos are a great example of “you are what you eat”. They get their color from the carotenoids in what they eat, like shrimp, thus producing the pink/orange color. This actually can and does happen in humans as well. Your skin will get an orange tone if you eat a lot of carrots!

Thank you to the San Diego Zoo Safari Park for providing us with tickets for entry into the Park. We paid for our Behind the Scenes tour and all opinions remain our own.