The whole country has been set ablaze with the Hunger Games: Catching Fire Victory Tour. To help promote its release in theaters today, November 22, several of the cast members have been meeting with their fans over the last couple weeks. Houston, TX was the last stop on the tour, which is where I was able to attend a press conference and get to know them a little better.

The cast members in attendance were Jena Malone (Johanna), Sam Claflin (Finnick), Alan Ritchson (Gloss), Jeffrey Wright (Betee), and Stephanie Leigh Schlund (Cashmere). The press conference was held in a very intimate conference room at the Four Seasons in Downtown Houston with about twenty local bloggers and newspaper staffers. (I was close I could have reached out and touched them!)The actors made us feel right at home and were eager to answer our questions about their characters and the movie.

Wright, Malone, and Schlund admitted that they had not read the books before seeing the first movie in theaters. It didn’t take them long to hit the bookstores and Malone said it took her only a few days to finish the whole series. It was then that she knew she had to be a part of this trilogy. Wright joked that his daughter was very adamant that he jump at the chance to be a part of this as well. 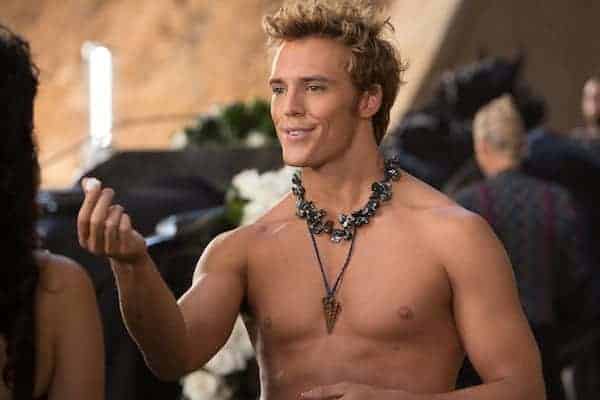 I was lucky enough to have the chance to ask Sam Claflin how he felt when the super fans of the book series Hunger Games found out that he would be playing Finnick. This got the whole cast laughing and joking around with each other. Claflin revealed that he was really nervous at first and that he wasn’t always happy with some of the things said about him. He hopes that when the fans see the passion in his work that they will start to come around and accept him as their beloved Finnick. Schlund, poked him in the arm jokingly and assured us that we would definitely approve of his performance.

When asked if they were anything like their characters, Schlund had to admit that she wasn’t anything like Cashmere and that it took a lot of work to stay in character. She said that she is a genuinely nice person, so playing Cashmere, a not very nice person, was hard. She said that she’s the kind of person who “likes to give out free hugs,” so it took a lot to switch back and forth between her own personality and Cashmere’s. She joked that sometimes it took the help of Ritchson, who plays Gloss, to help her switch back to her old self.

When it was time for them to go, you could feel the sadness in the air. The actors of Hunger Games: Catching Fire were a delight to meet and I wished that the interview could go on forever. However, their stop in Houston was not over yet, they still had to greet hundreds of their fans at a free event across town.

The event was hosted by the ladies of Literary Beginning and Red Carpet Endings. You can follow them on Facebook or look them up on their website at redcarpetendings.com.