Since the dawning of Grey’s Anatomy in 2005, I have been a faithful follower of all things McDreamy, McSteamy, and McAnything. I’ve spent many trips in Seattle hoping to stumble into a crowd of attractive surgical interns, and always been checked into reality on flights home. I never thought I’d see the halls of Seattle Grace/Seattle Grace-Mercy West/Grey Sloan Memorial, but as filming season 10 comes towards a close, I had the chance to sneak on the set of Grey’s Anatomy to take a peek in the infamous MerDer Dream House and take a tour of the hospital, hosted by Jessica Capshaw (who plays Dr. Arizona Robbins). 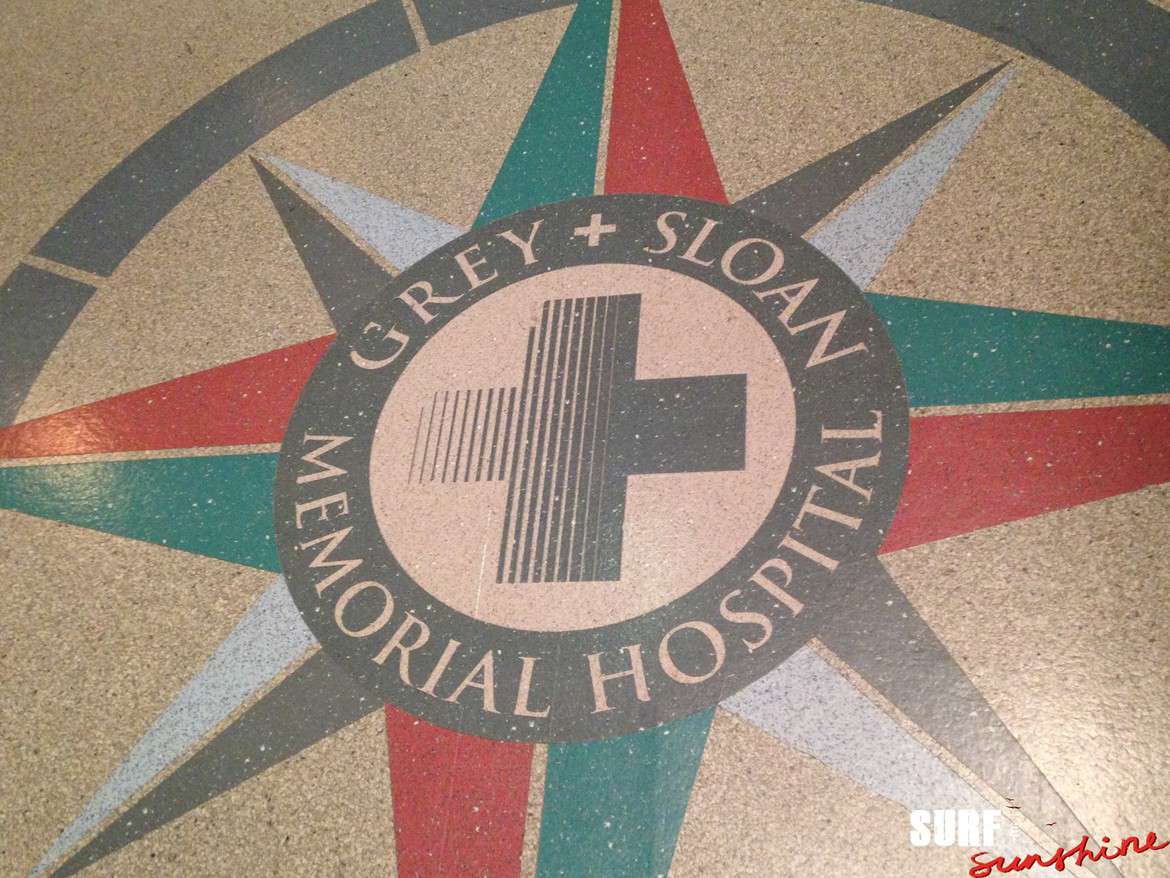 Inside the set of Grey Sloan Memorial Hospital, I was surprised to find everything marked with the hospital’s logo. The above picture is on the floor in the central lobby where you’ve seen many fights, kisses, and meetings throughout the series. Even hand sanitizer stations (which are fully operational for the cast and shooting crew) had the fictional hospital’s logo, as well as reasons why it’s important to keep your hands clean in a hospital. 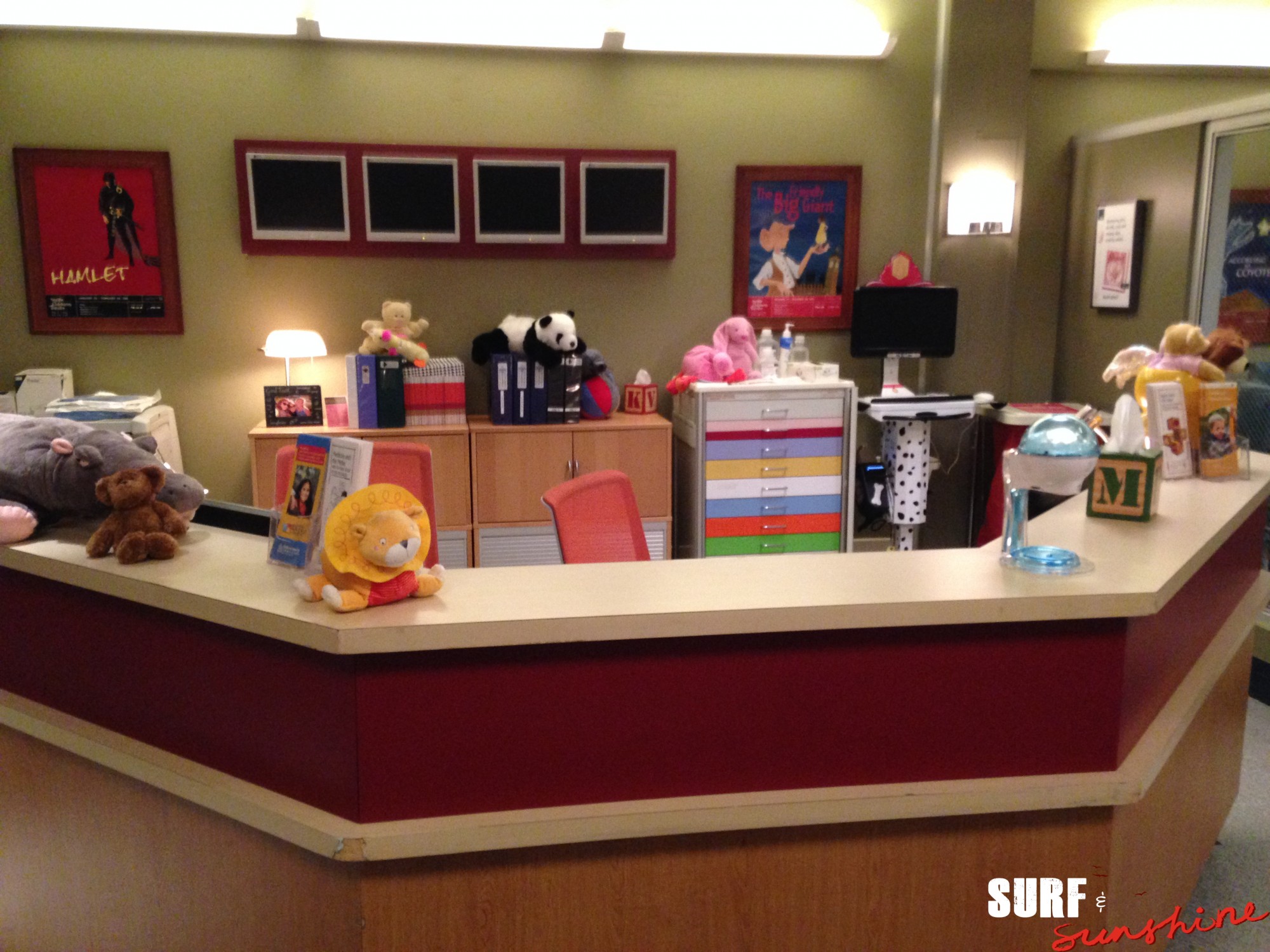 As you can imagine, Capshaw was thrilled to show us her Pediatrics Department. The walls are covered in posters from local Seattle children’s theatre productions, and there is no shortage of kid friendly decor. I’ve never noticed the stuffed animals nor multi-colored drawers, but the small touches of color really make a difference on this set. 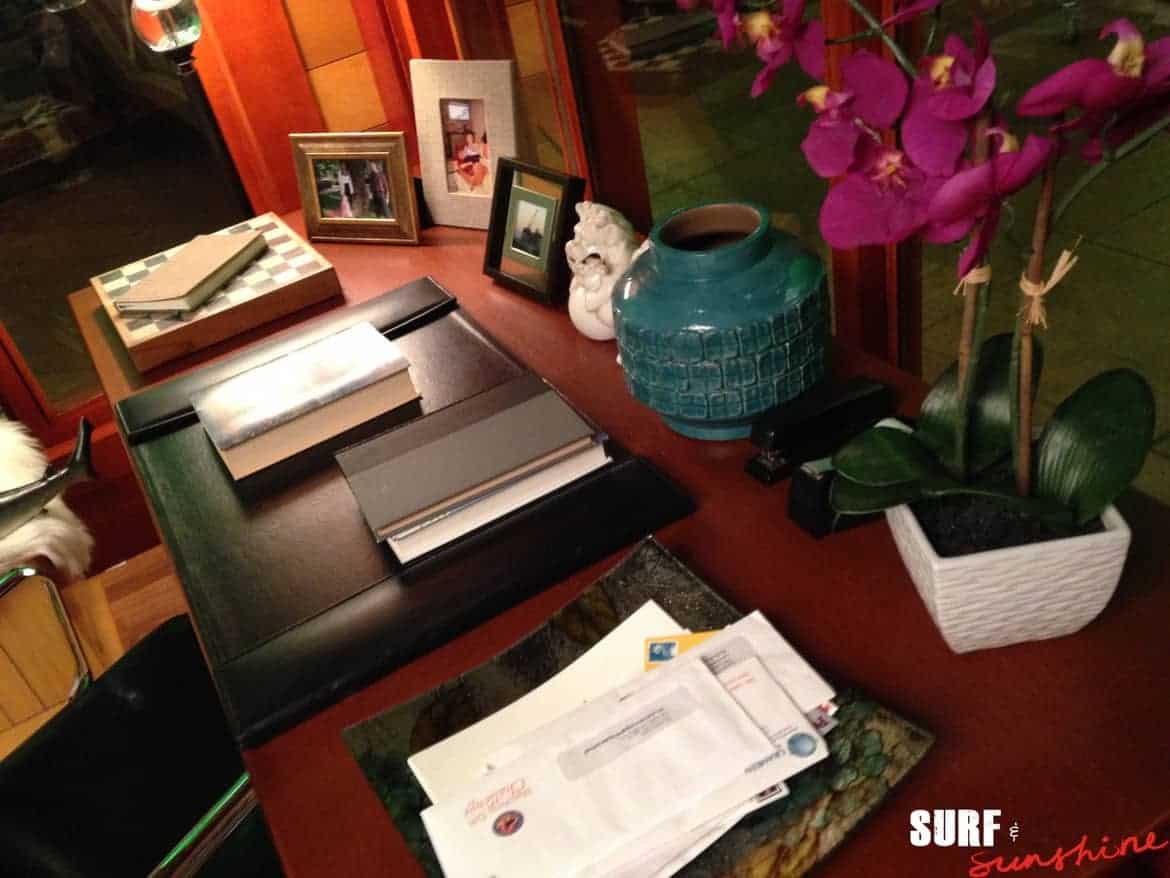 About 20 feet away on another sound stage was the home of Meredith and Derek, and of course their kiddos Zola and baby Bailey. All of the decor is exactly how you’d imagine: small statues, vases, exotic plants, and a mostly neutral palette. Many photos of the McDreamy’s sit around the home, as do a few children’s drawings on the fridge. 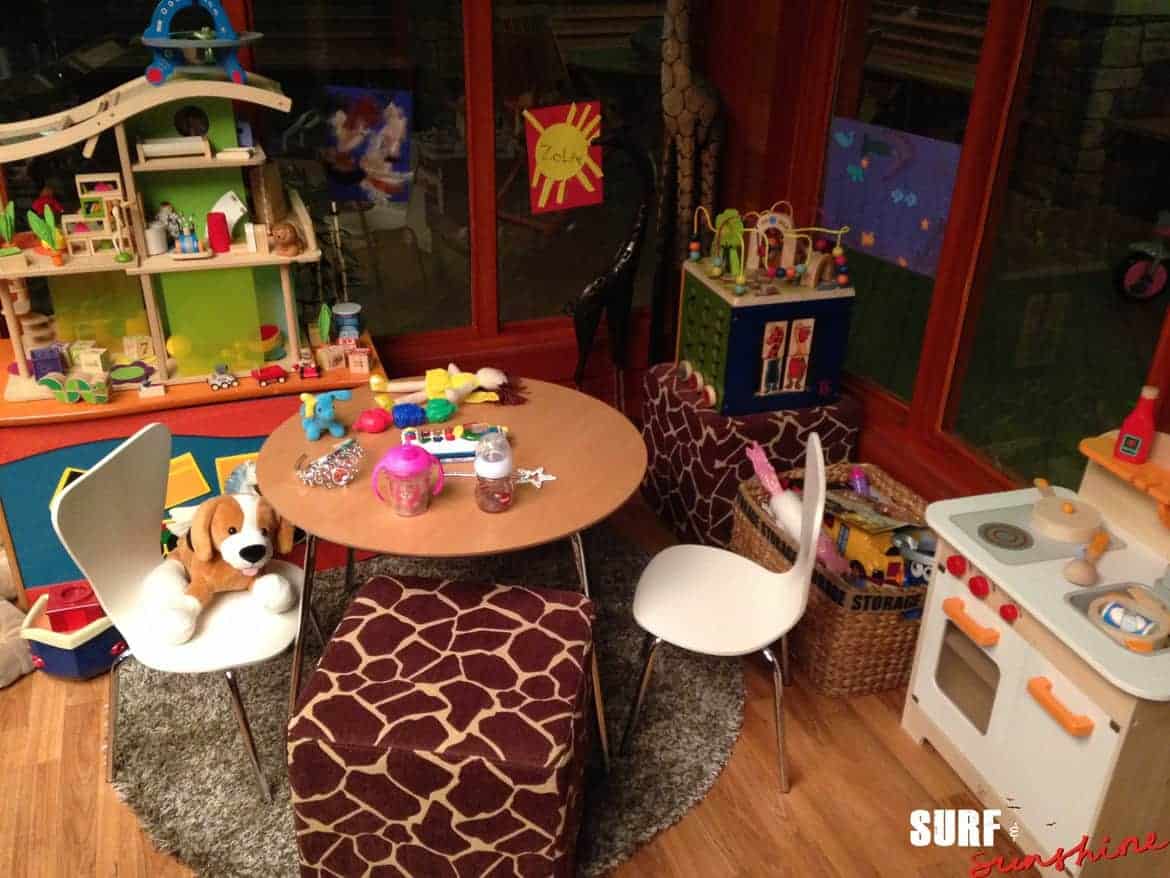 Zola’s play corner is fit for a princess and filled with all sorts of traditional wooden toys. On the other side of the windows wraps a green screen. It turns out that the home is not upon a hill in Seattle, so visual effects artists add in the foliage after filming. 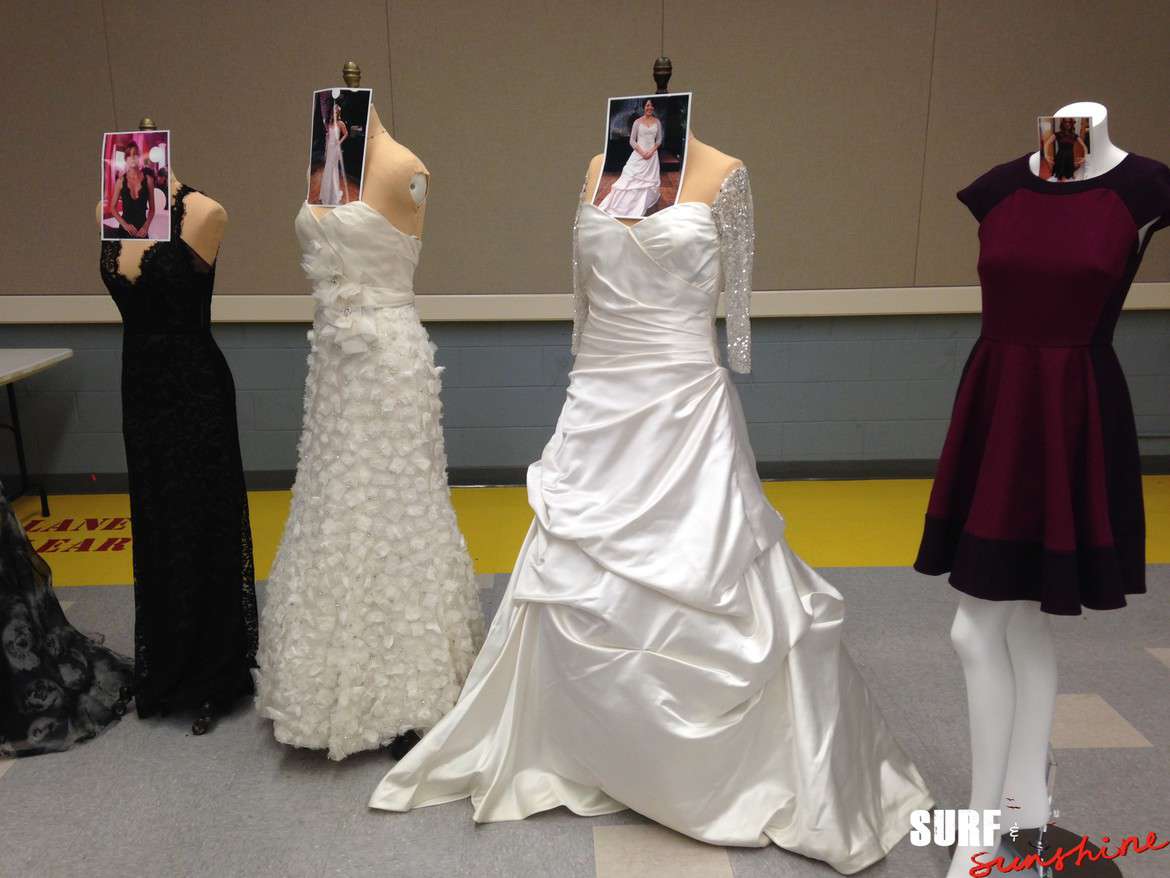 Not far from set, costume designer Mimi Melgaard had a series of the show’s most iconic dresses and gowns as worn by the cast. I asked her about Izzie’s (Katherine Heigl) pink prom dress from season two when Melgaard was still fairly new to the series, and she told me executive producer Shonda Rhimes specifically requested a large, pink gown. Though at the time, Melgaard didn’t understand the full concept since she hadn’t seen the script, she had Izzie’s dress custom made and dyed to fit the Rhimes standard. In the following episode, Izzie had the most heartbreaking moment of the series as her pink dress draped stunningly across Denny’s (Jeffery Dean Morgan) bed. Melgaard knew from there that working with Rhimes and the Grey’s team would be a fantastic job. 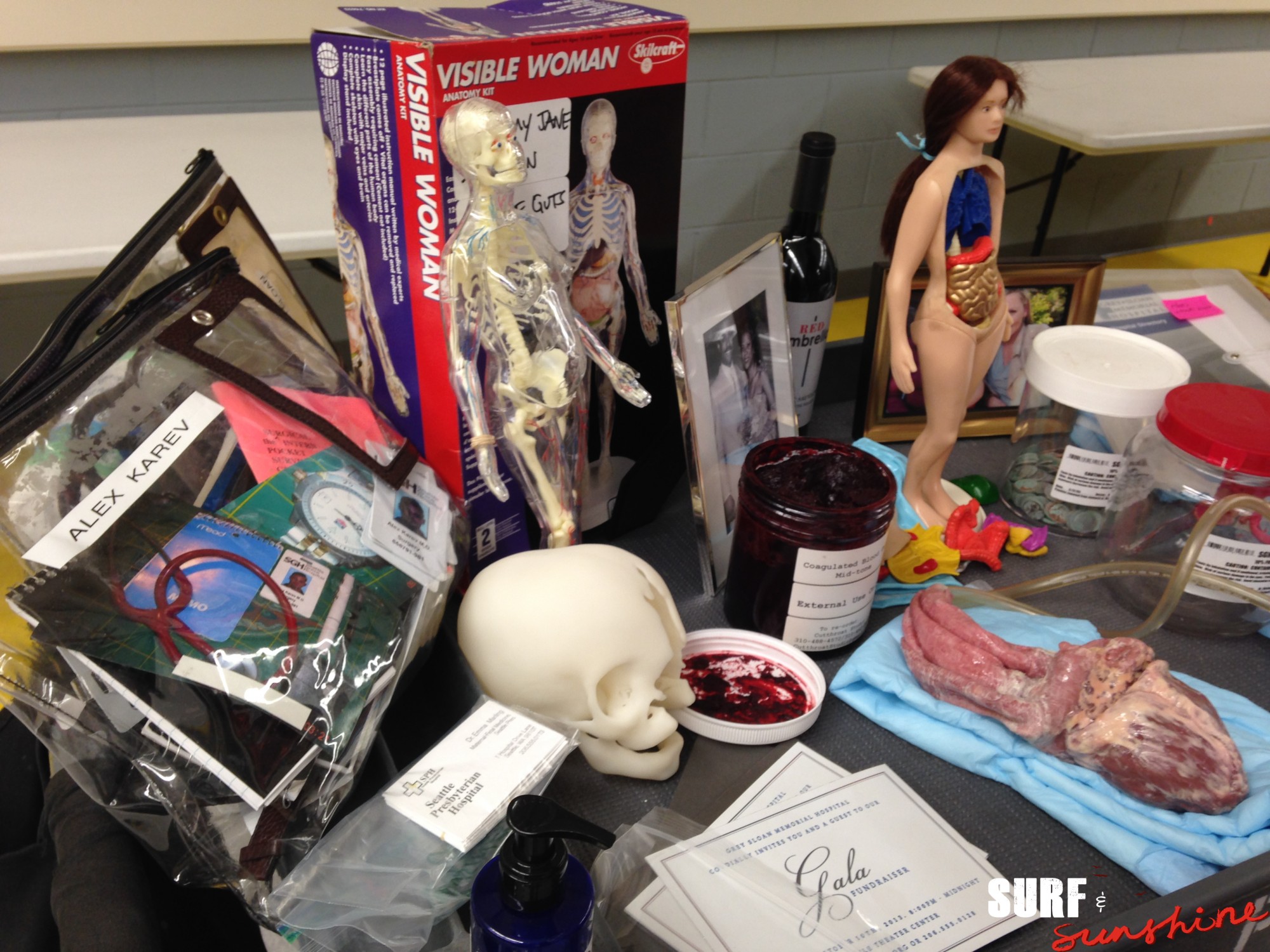 Props Master Angela Whiting displayed some of the most magnificent props from the show, including Anatomy Jane. Anatomy Jane was custom molded from a see-through anatomy doll to create a lifelike doll, as once again Rhimes requested. Her team makes everything from all of the organs you see in surgery on the show (like the silicone heart above) to name badges and family photos. 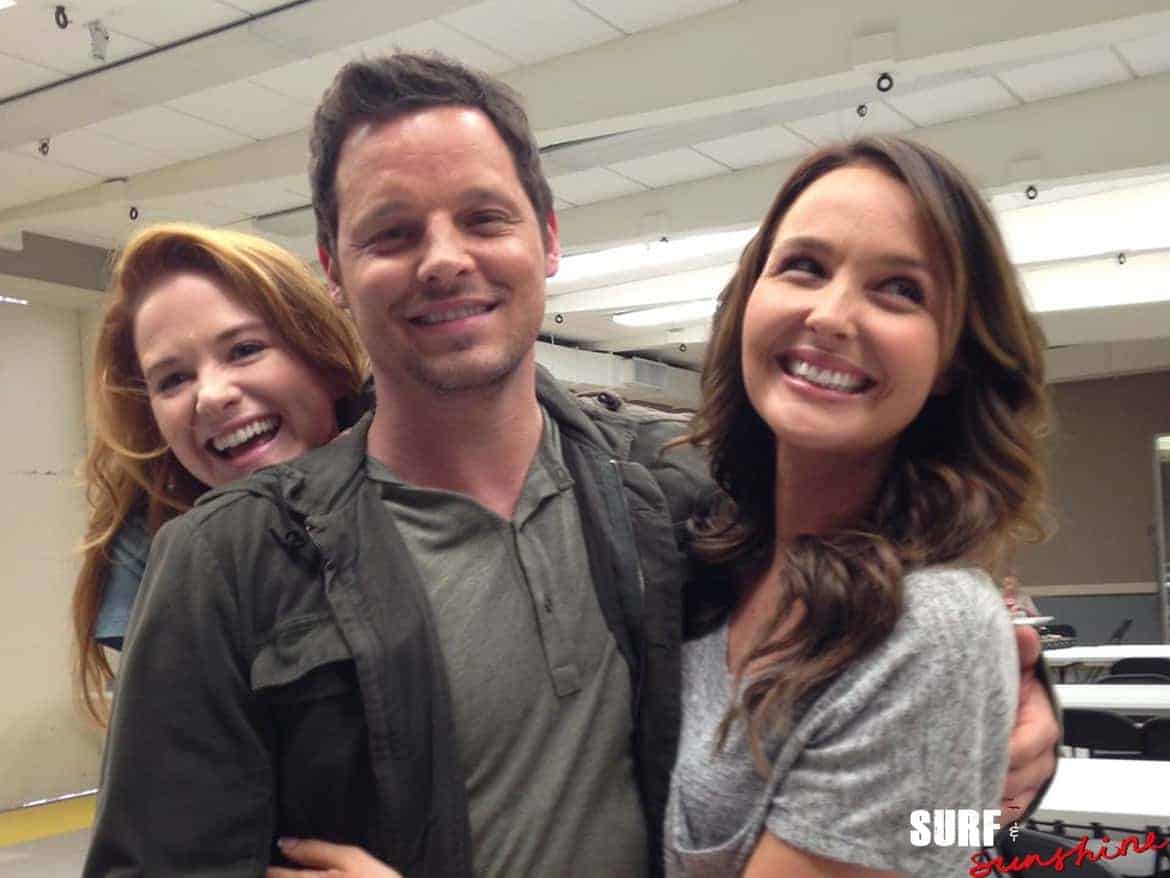 Just when I thought I was having the perfect day on the set of Grey’s Anatomy, Sarah Drew, Justin Chambers, and Camilla Luddington (who play Dr. April Kepner, Dr. Alex Karev, and Dr. Jo Wilson, respectively) walked in for a quick hello in-between takes!! I had the best time checking everything out, and I hope you enjoy the photos.

ABC hosted me at an event. All opinions are 100% mine.

7 thoughts on “Take a Look in Grey Sloan Memorial Hospital”