Theirs isn’t the first Freaky Friday or even the second. Lindsay Lohan’s 2003 hit with Jamie Lee Curtis and Hayley Mills’ 1977 version are both solid classics. And before that there was a book by Mary Rodgers.

And yet it seems the mother/daughter body swap is the cocktail you need for hit status. The movie showed up on Disney Channel in early August, only to be followed by a Blu-Ray/DVD sure to land on a few holiday lists this year. Thanks to an early copy of the film, we’ve got a few answers for parents wondering if this one is worth the investment.

Like the 2003 and 1977 versions before it, Disney’s new Freaky Friday involves a mom, a teenage daughter, and a very, very freaky incident that lands mom Katherine Blake inside daughter Ellie Blake’s body and vice versa. But where the first two films played the storyline as a typical narrative, Disney’s latest version, starring Cozi Zuehlsdorff of Dolphin Tale and Dolphin Tale 2 fame and Heidi Blickenstaff, is a musical romp.

Everything, and we mean everything, has been set to music, taking mother-daughter relations to Broadway theatrical levels. Which, when you think about it, is exactly what it often feels like when you’re parenting a teenager, isn’t it?

It’s the focus on what it means to be a teenager and parent a teenager that has made Freaky Friday a storyline filmmakers keep returning to, and Disney Channel does the topic the justice it deserves.

Ellie is grappling with the death of her dad just three years prior, her mom’s growing success as a social media star (OK, so they added a little more than just music), and of course a younger brother doing what younger brothers do best … embarrassing her.

Katherine, on the other hand, is a single mom trying to raise two kids, one of them a teenager who is cutting school and fighting her every word.

The film works because it’s relatable, but its the path to understanding for both mother and daughter that makes stuffing it in your kid’s stocking this year a means to create your own bridge. Watching this with a tween or teen is a whole lot easier than eating some magic food and waking up to find yourself in your kid’s body, and there isn’t a whole lot more than needs to be said.

Watch Freaky Friday on your own. Then watch it with your kids. And remember, we all go through an Ellie stage. And hopefully one day they’ll be kinder Katherines because you were that to them. 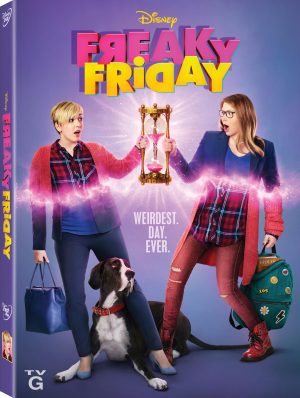 Synopsis: A contemporary musical update of the classic comedic story, “Freaky Friday” is based on Disney Theatrical Productions’ stage adaptation of the celebrated novel by Mary Rodgers. Sixteen-year-old Ellie Blake and her uber-organized mom Katherine, are constantly at odds about Ellie’s messy room, sloppy clothes and seemingly careless attitude. Ellie really misses her dad who passed away a few years ago; she bickers with her younger brother and argues with Katherine who’s getting ready to marry her fiancé, Mike – tomorrow.  As mother and daughter quarrel, they accidentally break the treasured hourglass given to Ellie by her father and then, suddenly, they magically switch bodies. Now, Ellie and Katherine must trade places at work and at school, and, during one crazy day, they’ll learn to understand and appreciate each other.