Narrowed down to just the *MUST* experience rides and our secret squirrel PRO tips, you and your kids are in for an awesome Island of Adventure and Universal Studios experience – even if you’re short on time.

During our Surf and Sunshine Family Retreat, myself and Jeana, as well as our two toddlers (Maddilyn and Whistler) were able to spend the day experiencing Universal Studios and Island of Adventure. 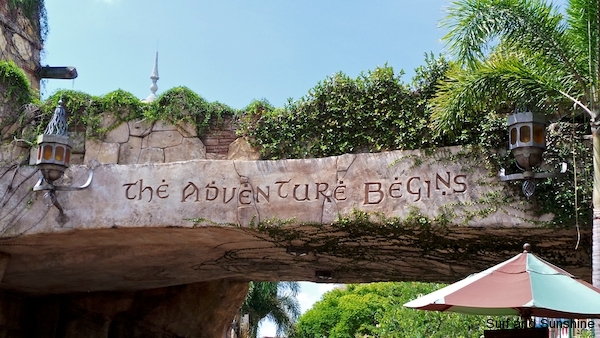 While Whistler and Jeana had been here before, it was mine and Maddilyn’s first visit. I couldn’t wait to experience some thrilling attractions.

Unfortunately, it isn’t as easy to power through an amusement park with kids as we thought it would be.

Between the potty breaks, the stroller loading and unloading, lunch and time spent walking between rides – we we all spent!

As one of the most exciting things to do in Orlando with kids, spending the day at Universal Orlando isn’t for the faint of heart. But don’t worry – we’ve made this handy guide for you.

Get Tickets to Universal Both Parks

Our first tip? Get tickets to BOTH Island of Adventure and Universal Studios. Each park has their own unique aspects and awesome rides that you won’t want to miss. 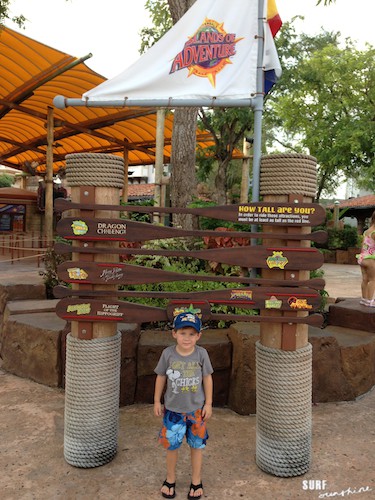 *TIP* If you’re visiting with children under 40″, you’ll save time and energy by heading straight to Suess Landing at Universal’s Islands of Adventure and Woody Woodpecker’s Kidzone at Universal Studios.

While there is a show or two at Universal Studios without height limits at all, those same shows may be a little too scary for little kids to watch.

That being said – DO NOT MISS the Superstar Parade at Universal Studios!

This daily interactive parade features beloved characters, larger-than-life floats, state-of-the-art technology and hundreds of street performers. Boogie down and rock out with Nickelodeon’s SpongeBob SquarePants and Dora and Diego; E.B. from the hit animated film, Hop; and Gru, Agnes, Edith, Margo and the minions from Despicable Me.

These floats were amazing and everyone lining the streets just couldn’t help but dance along to the music.

How could you not when you have Dora and Boots waving and dancing right along with you?

Whistler was so thrilled when several of the performers stopped to shake his hand or give him a high five, that he completely forgot that the whole reason we were even out on the street was because he wasn’t tall enough to go into Despicable Me!

So make sure you check your park map to see what time the parade starts.

On the map we had, it looked like it was scheduled for just once a day!

As a N*E*S*T recruit, you’ll find yourself on the front lines of an intergalactic war between the Autobots and Decepticons. You’ll fight alongside Optimus Prime and Bumblebee, trying to keep the Allspark from falling into enemy hands. Min height – 40″.

This ride is pure heart-pounding adrenaline.

Honestly, there were times where I wasn’t 100% sure I was looking at a screen. It’s a combination of 3-D Movie and thrilling roller coaster ride.

Note: Even though your child may meet the height requirement, this may not be the ride for them if they are easily scared. It’s pretty intense nonstop action.

Join Gru, his daughters, and the mischievous Minions on a heartwarming and hilarious 3-D ride. Start your adventure in Gru’s home, where you’re recruited for his latest scheme – one where you’ll become an actual Minion. Min height – 40″.

This family friendly ride had my daughter squealing with laughter from the very beginning.

This 3D ride brought along all of our favorite characters for a thrilling experience where we laughed, yelped and gasped along the way.

The Amazing Adventures of Spider-Man® at Universal Studios

Get set to soar with your friendly neighborhood Spider-Man™ like never before!

Some of the most dastardly villains are attempting to take over New York and we set out to help our friendly neighborhood Spider-Man. Unfortunately, we may just be more hindrance than help.

Nevertheless the 4D effects are amazing and be prepared for a surprise or two. The height requirement is also 40″ for this ride. But don’t fret if your kiddo doesn’t meet it – just walk across the street and meet Spider Man in person!

Note: This ride is an intense, immersive experience. There was one point where it really looked and FELT like we were jumping off a building and my son started crying and was very frightened.

If you’re planning your trip to Orlando and want an awesome way to tell the kids, call 407-224-4001 and receive a special greeting from Spider-Man!

Flight of the Hippogriff at Islands of Adventure

Follow Hagrid’s instructions as you learn the proper way to approach a Hippogriff, which has the head of a giant eagle and the body of a horse. Then you’ll take off on a family-friendly coaster that spirals and dives around the pumpkin patch, and swoops past Hagrid’s hut. Min Height – 36″.

The flight aboard the Hippogriff packs a doozy! We were excited to find a ride that Whistler (at 38″ tall) could go on and even more surprised at the dips, turns and dives.

At first the kids were a little frightened (why lie – the moms were too), but once the adrenaline kicked in, we all ran off the ride and right back into line to go again.

(This is where the Universal Express Pass really came in handy!)

On a hot day you’ll want to make a pit stop at Toon Lagoon in Universal Studios.

While the kids try to guess where the water will come up next, you can treat yourself to some goodies from the snack kart, within perfect watching distance.

One Fish, Two Fish over at Seuss Landing in Islands of Adventure is a silly ride where (supposedly) if you listen to the song, you won’t get wet.

Personally, I think everyone gets wet anyway but don’t worry, I’m sure you’ll be laughing the whole time just like we were!

The High in the Sky Seuss Trolley Train Ride! at Islands of Adventure

You’ll take a tour over and through Seuss Landing on this colorful and easy going ride.

This was one of Whistler’s favorites last year when he was just shy of the 36″ mark, but they upped the height limit on this ride to 40″ within the last year, so he wasn’t able to experience it this time around.

Maddilyn’s favorite part was going through the restaurant and waving to everyone eating.

Caro-Seuss-el at Islands of Adventure

The name is pretty self explanatory. A fun little one of a kind carousel made up of unusual creatures from the imagination of Dr. Seuss.

There is no height requirement when riding with an adult.

Whoa! What happens when you let a wacky woodpecker design and build his very own roller coaster? You get a nuthouse on wheels!

This was one of Whistler’s FAVORITE rides and he rode it three times in a row before we could move on.

It’s a quick ride with just enough thrill to keep adrenaline junkie toddlers happy and the height requirement is only 36″ with an adult escort.

Adorable photo opportunities are spread throughout the two parks.

You can take advantage of many areas throughout the park on your own that are “freebies”,

but our favorite the ones you spotted the Universal Photographers at, like when we ran into the T-Rex!

Or the time Transformer’s Bumble Bee showed up while Maddilyn was sleeping.

Secret Squirrel Tip: Get a single photo card when you enter the park (you can get them any place you see a park employee standing with a camera).

Then make sure you take advantage of ALL the photo opportunities the park has to offer – there is usually something in every area.

After each special character, you’ll need to stop by THAT photo desk to make sure to have the backgrounds placed onto your photos.

Then you can continue on to the next photographer you might see.

At the end of your visit stop by the visitor center and get ALL of your photos on a CD for a surprisingly reasonable flat rate (compared to other theme parks).

The more photo opportunities you take advantage of the better this deal is.

If we had known this up front, we would have DEFINITELY taken advantage of this opportunity!

Also worth noting is that you CAN NOT view your pictures online or even any other day than the day you visit the park.

A big thank you to Universal Studios and Island of Adventure for providing complimentary passes to the SAS family for review purposes. All opinions are original.