Who is Oscar Diggs and why is he so powerful? Oscar Diggs was the son of a politician born in Omaha, Nebraska. His full name is a mouthful: Oscar Zoroaster Phadrig Isaac Norman Henkel Emmannuel Ambroise Diggs.

When abbreviated to initials, his name becomes O.Z.P.I.N.H.E.A.D.

I bet he was teased a lot as a child, don’t you?

Oscar was a ventriloquist for Bailum & Barney’s Great Consolidated Shows. He would ride up in a hot air balloon, in order to draw crowds to the circus. People knew him as OZ. One day, Oscar experienced a malfunction when his ropes became twisted and the balloon escaped.

Two days later when he descended in the Land of Oz, onlookers greeted him as a wizard. (The Wonderful Wizard of Oz, Dorothy and the Wizard in Oz) If he came from the clouds, they believed he must be great and powerful! 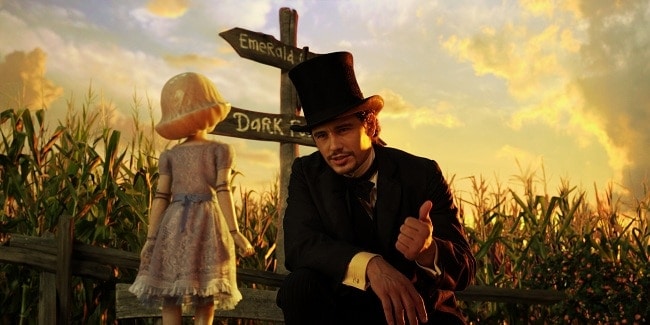 The Wizard relieved the rightful king, Pastoria, of his throne and hid the king’s daughter Ozma with the old witch Mombi, whom he visited three times. (The Marvelous Land of Oz).

Next, he supervised as the citizens built the Emerald City and the Royal Palace of Oz. He declared himself ruler of the entire Land of Oz, uniting the Munchkins, Gillikins, Quadlings, and Winkies.

But, the Wizard was hiding in Emerald City because he was afraid of the four witches who ruled each quadrant of Oz. He stayed hidden and relied on his reputation as a powerful wizard to protect him. He was highly respected by his subjects and called “The Great Oz” or “Oz the Terrible”.

While he was never seen, even by his closest servants, everyone believed him to be all-powerful. 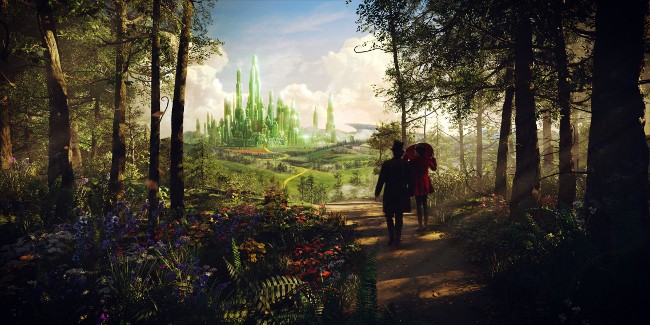 Catch a sneak peek of Disney’s Oz the Great and Powerful, starring James Franco as Oscar Diggs, a small-time circus magician with questionable ethics, who finds himself miles away from Kansas in the vibrant Land of Oz. At first Diggs thinks he’s won the lottery, and can expect a bright future full of fame and fortune.

That all changes, when he meets three witches, Theodora (Mila Kunis), Evanora (Rachel Weisz) and Glinda (Michelle Williams), who are not convinced he is the great wizard everyone’s been expecting.

Oz The Great and Powerful is produced by Joe Roth, with a screenplay by Mitchell Kapner and David Lindsay-Abaire (credit not final). Grant Curtis, Palak Patel, Philip Steuer and Josh Donen are executive producers.