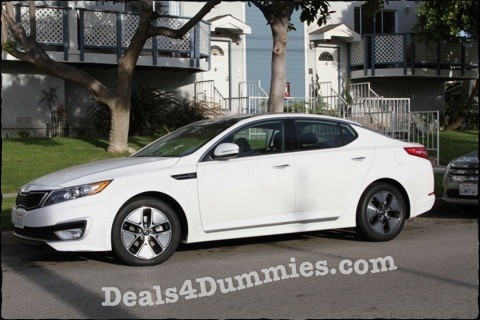 The 2011 Kia Optima Hybrid is Kia’s first entry in the hybrid category and also the very first electric vehicle I have ever driven. The first thing I noticed when it was dropped off at my house was the styling.

From the 17-inch alloy wheels …

I was convinced she was the prettiest car on the block :)

The interior styling also did not disappoint.

Unique to the Hybrid is a special gauge cluster that displays its hybrid power flow and overall driving style efficiency along with other information. I’m a scientist at heart and am driven by numbers and stats. I found I really liked seeing the gas efficiency at any given moment and the overall eco-friendliness of that particular trip or tank of gas.

While I was prepared for the amazing gas mileage (35/40), what I was not prepared for was the ninja-like silence and lack of vibration I would experience when in battery mode. I seriously could not tell whether or not the car was even on and I swear I snuck up on a fly at least twice.

Unlike other Hybrids on the market (which seem to get smaller and smaller by the day), the Kia Optima Hybrid is truly a mid-size sedan. It’s much larger than my current Volkswagen Jetta, but not so large that it feels like a “beast”.  The back seat is super roomy and the leg room is quite noticeable when you place a car seat back there.  Whistler’s feet are usually squished up against the back seat of my car and in the Kia there was several inches to spare (not that I don’t enjoy my poor-mans version of a seat massager when he kicks me as I’m driving…)

And even though the Hybrid’s trunk space is smaller than that of the traditional Optima (about 9.9 cubic feet) – I was still impressed with it’s size! I had absolutely no problem placing a jogger stroller in the back PLUS groceries from the store. (I can’t even begin to try to put that jogger in the trunk of my current 4-door sedan!

My only disappointment with the trunk/storage capacity of the vehicle was that the rear seats do not fold down.  :(  BUT, for you snow bunnies out there, there is a convenient ski-pass thru that wouldn’t be too terribly intrusive to backseat passengers.

The Hybrid is powered by a 166-hp, 2.4-liter four-cylinder engine mated to a 40-hp electric motor. Total output is 206 hp and 195 lb-ft of torque, sent to the front wheels via a six-speed automatic transmission. It took a little getting used to driving a hybrid vs a standard gas powered car because it can seem sluggish or jumpy at lower speeds.

I did find that this small annoyance became less noticeable the more I drove it and by the end of my week, it was negligible. I *really* forgot about it when I realized that with “normal” driving one would probably go about 2 weeks between filling up the tank!

Like the 2012 Kia Sorento I previously reviewed, the UVO system also comes standard on the Optima Hybrid and includes features like voice-activated control of Bluetooth wireless technology enabled phones. This intuitive system lets you make phone calls and stream music from your compatible smartphone through the vehicle audio system without taking your hands off the wheel. LOVE this feature and really think that EVERY car should have it as it is as much a safety feature as it is convenience.

Of course, I still adore the rear parking sensors and rear camera display. Not only does it save me from straining my neck but it also provides very helpful guides on how much room there is while parking (no more sending someone out to give you the you-have-this-much-room-left-between-my-hands signals).  Should a child or animal all of a sudden show up behind your car – you’ll know it.

While The National Highway Traffic Safety Administration has not crash-tested the 2011 model, the 2012 Optima Hybrid received five out of five stars (★★★★★) overall.

PSSST!!! Did you know that Kia offers an astounding 10 year / 100,000 mile warranty on their vehicles? If that doesn’t scream confidence and peace of mind – I don’t know what does.

Overall I found the Kia Optima Hybrid to be a fantastically roomy, sporty and stylish car to drive that is friendly to our environment.  Moms and dads will love that it’s safe and affordable and the kids will think it’s fun to sneak up on and give old aunt Hilda a mild heart attack.

Disclaimer: A huge thank you to Kia for loaning me this vehicle for a week to facilitate this review.  No compensation was received and as always, all thoughts and opinions are 100% mine, all mine.