Everyone knows the movie Bumblebee is set in the 80s, and honestly could there really be a better decade for a Transformers reboot of any kind? (No, the answer to that question is no, there cannot.) Anyone that has a nostalgic tie to the Transformers franchise wants that great 80s vibe and Bumblebee delivered that to us on a silver platter. One of the key ways Bumblebee was able to give us such a heart-melting hit of this nostalgia is because of the music in the movie; with Bumblebee himself being a key factor in delivering timely classics to communicate the mood, or just plain communicate in general. 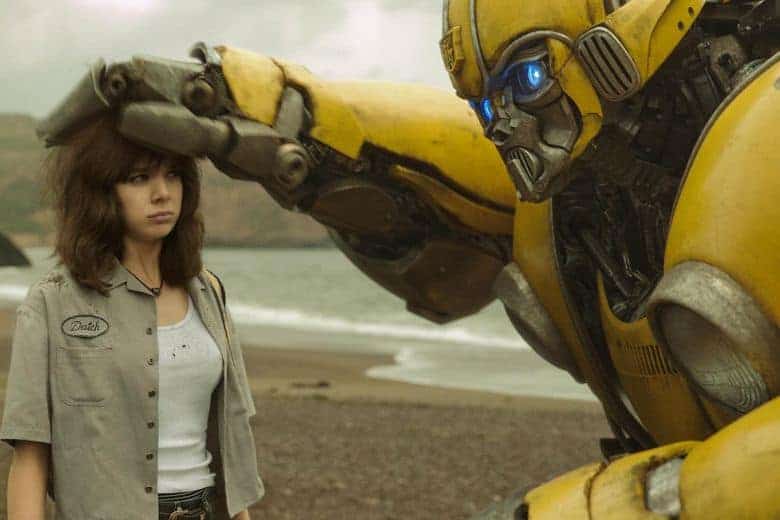 As soon as Bee gets his new “voice” it’s pretty obvious he has some very specific tastes in music. His instant rejection of The Smiths and refusal to unwittingly Rick Roll an entirely new generation of Transformers fans is pretty amazing. How can you not love his ability to spit out (and silence) Rick Astley faster than any of us can close a tab on a browser? It’s a dream come true. So would it be even more entertaining to imagine Bee communicating with songs that aren’t as decade friendly? He is a more developed race than us primitive humans, right? Perhaps he’s already heard the hits that are to come and would prefer to communicate with those songs in mind. Would 90s boy bands and some Beyonce thrown in there give him a chance to really express the inner snark we all know is sitting right below his shiny yellow exterior?

The first time Bee gives us a song he’s chosen himself it is a pretty good choice. Yes, Bee, everyone does want to rule the world. But let’s move that choice up about a year. An even better option could’ve been Tracy Chapman’s “Fast Car.” Bumblebee has always given us some pretty self-aware humorous moments, so letting Charlie know she’s in a fast car and has a ticket to anywhere seems like a good fit here. A little more of a humorous feel and a little less of a mood music choice, but it seems to fit Bee’s personality just fine. And since this only takes us a year ahead of the movie’s 1987 timeline, we’re really just getting started with the musical revamp options.

Moving along we get to hear Bee get a little funky as he shows off his new found abilities to communicate. Although “Groove Is In The Heart” is a pretty awesome choice yet again, (Seriously, is Bee available for DJ’ing birthday parties?) there’s also a hidden gem of an option if we push that musical timeline up just a little once again. Playing Tone Loc’s “Funky Cold Medina” while figuring out what’s going on at the beach? Yeah, that seems like a pretty awesome way to roll in and show off your new car to the snobby kids from school that mocked your work uniform not too long ago. And if Bee could skip ahead to the mid 90s, he probably could’ve spit out a little Spice Girls when talking about wanting revenge on those snotty kids. Tell us what you want, what you really really want there Bee. We’re listening we promise.

Bumblebee gives us another dose of musical hilarity while running from a speeding ticket and it’s hard not to wonder how some Snoop Dogg would’ve factored into that chase. Bumblebee definitely was driving like it was hot after all, and Snoop’s song probably would’ve been an apt choice considering Bee was already going well over the 55mph in his song choice anyhow. Plus the shocked look on Charlie’s face hearing that song choice could’ve been comedy gold. Snoop Dogg is a far cry from The Smiths. Bee probably would’ve known that too, as he usually has quite the grasp of really on the nose styles of humor.

It is kind of fun to imagine what the possibilities are with Bumblebee’s uniquely spicy personality and communication style when we broaden the decades of musical choices a little. We can probably trust him to skip over dreadful musical faux pas like disastrous remakes and keep the hits rolling. However, as true blue fans are likely to say, there’s just no replacing the 1980s origins of the Transformer’s franchise. Messing with Charlie’s connection to “Unchained Melody” and her father would be unthinkable, and who doesn’t want to see if he would’ve spit out that Stevie Nicks tape? Clearly leaving Bee to his 80s style is always going to be preferable, but maybe this look at some alternative options gives us an idea of what options Bumblebee might have in the future. (And please, please let there be a future for this franchise!) Using some Spice Girls and Snoop Dogg may just really give him that chance to walk away fist in the air Breakfast Club style after all.

What alternate songs can you come up with? Bumblebee is available now on DVD, Blu-Ray and streaming – why not have a viewing party and a little competition with friends on who can give the best alternate song? You could even give Bumblebee toys and action figures as prizes!