Grab your magnifying glasses and some popcorn. Here are 9 of my favorite Easter eggs from Marvel’s Ant-Man

! And now that it is available for download on Digital 3D and Digital HD today, November 17 and on 3D Blu-ray Combo Pack, Blu-ray, DVD, Digital SD and VOD December 8, you can spot them all from comfort of your own home.

Al Migrom was a classic Marvel comic book artist who spent a 40-issue run drawing West Coast Avengers, which frequently featured Hank Pym. As an homage, the filmmakers named a hotel after him; The Milgrom Hotel!

Dropping Cities from the Sky

When Scott Lang tells Hank Pym to just call the Avengers to solve the problem, Pym reponds by saying they they’re probably too busy “dropping cities from the sky,” a reference to the events of Marvel’s Avengers: Age of Ultron.

The first person to ever play Ant-Man was Garret Morris in a Saturday Night Live sketch. In the film, Morris can be seen in a quick cameo as the driver of a car Scott Lang lands on when he is first testing out the suit.

The opening flashback scene featuring Howard Stark and Peggy Carter during the 1980s takes place at the shiny and newly constructed Shield headquarters, the Triskelion , you know, the place that gets destroyed in Captain American: The Winter Soldier.

Remember when robot meanie Ultron sang Pinocchio’s “I’ve Got No Strings” in the Avengers sequel? Well this time the Disney song duties are given to comedic sidekick Luis. He can be heard whistling Disneyland’s “it’s a small world” ride theme song. Also, see if you can spot Ariel’s best fish friend, Flounder from The Little Mermaid in Scott Lang’s daughter’s bedroom.

At one point in the film there is mention of another major superhero that has yet to make an appearance in the MCU. “We have a guy who can jump, who can swing, who can crawl up walls.” Sounds a lot like your friendly neighborhood Spider-Man, who is slated to appear in Captain America: Civil War.

I’ve saved the easiest for last. Comic book legend Stan Lee, who has made a cameo in every Marvel film, can be seen in Ant-Man as a bartender. 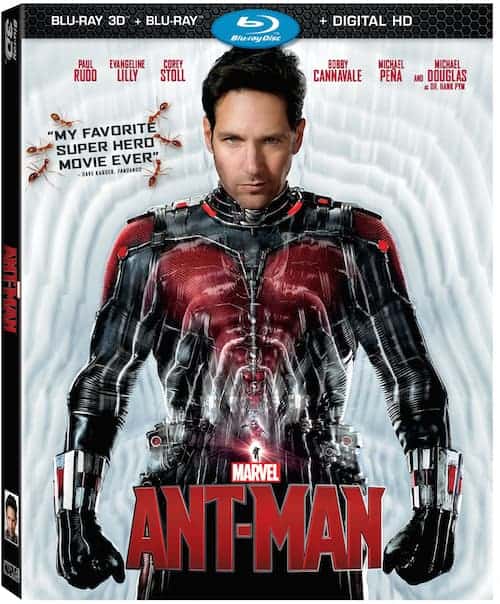 Marvel’s “Ant-Man” is the next evolution of the Marvel Cinematic Universe! Armed with the amazing ability to shrink in scale but increase in strength, master thief Scott Lang (Paul Rudd) joins forces with his new mentor Dr. Hank Pym (Michael Douglas) to protect the secret behind his spectacular Ant-Man suit from ruthless villains! With humanity’s fate in the balance, Pym and Lang must plan and pull off a daring heist against insurmountable odds. Filled with humor and awesome special effects, this action-packed adventure takes you to new levels of pulse-pounding excitement!