When I think of Las Vegas, it’s bright neon lights, staying up til the sun rises, dancing all night in clubs, rolling the dice at casinos, award winning shows – the makings of a veritable adult playground – come to mind. Of course with all the action, sustenance either is sometimes overlooked or on the flip side will play a huge role in determining that evening’s plans. Luckily in the midst of it all, you’ll be able to also find some of the most delicious meals lovingly crafted by award winning chefs in four and five star restaurants.

While Wynn Las Vegas offers numerous casual dining, lounges and bars, I highly recommend the Fine Dining establishments because Vegas is an experience, not a destination, and at Wynn, award winning food is apart of that experience. I’m convinced that you wont be disappointed by any of these dining establishments as Wynn offers some of the best restaurants on the Vegas strip.

I’ve been missing Hawaii since the moment I left, but as much as I missed the island, it was the food I craved so visiting Lakeside was such a treat. Author and Forbes Award winner and Chef David Walzog crafted the menu of this seafood restaurant to feature “Ocean to Table” fish, boasting the most unique species of the Hawaiian Islands. Selections include opah (moonfish), monchong (pomfret), mahi mahi, shutome (swordfish), ono (wahoo) and more. I think I tried more than a half-dozen dishes at Lakeside and each one was better than the last. I recommend going with a group and ordering a variety of dishes to share so that you can enjoy the experience of trying a bit of everything.

One of the great things that stand out about Wynn and it’s restaurants, is that it caters to everyone. Even though I adore seafood, my husband does not and that’s okay because Lakeside also offers a selection of prime-aged steaks, chops and succulent prime rib of beef also round out its menu. 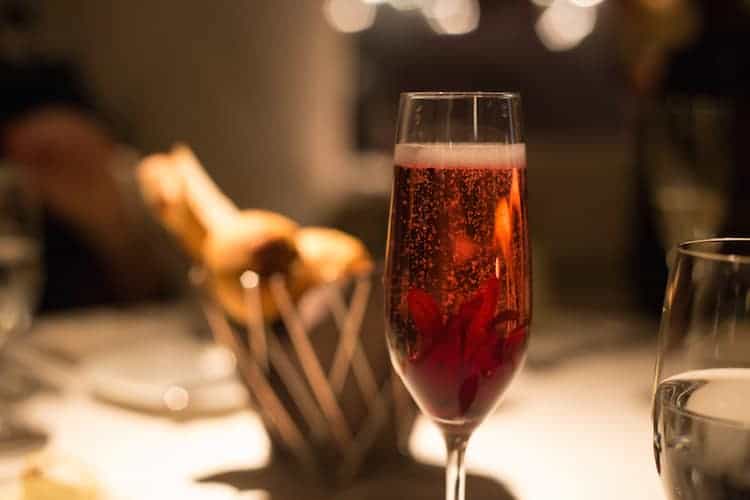 If you’re looking for a hip lounge scene, Botero is the place to be, featuring beyond-the-curve steaks, chops and modern cuisine by “Best Chef Southwest” nominee Chef Mark LoRusso. The food is just as decadent as the atmosphere as most of us, including myself, were getting ready for a night of clubbing as XS Nightclub right next door.

The Country Club is exactly what it sounds like. This American Steakhouse is outfitted in dark colors and rich woods. Overlooking the 18th hole of the Wynn Golf Course this Travel Guide Four Star award-winner features succulent steaks, prime rib, and Chef Guía’s New Orleans-inspired dishes like gumbo or savory shrimp and grits.

At the recommendation of Philip Wm. McKinley, director of Show Stoppers, I started with the Tuscan Kale Salad. It was like summer in my mouth. The dish is composed of Tuscan kale, aged goat cheese, Gala apple, and spiced pecans tossed in an Apple Cider Vinaigrette. Each bite was bursting with a sweet, tangy flavor and despite a second course coming, I could not stop cycling my fork between plate and mouth.

Which was a shame because that meant I could only eat half of my King Creole Burger. I have a rather intense love affair with anything bacon, so it’s no surprise that the words Bourbon Candied Bacon are what sealed my decision on ordering this burger. This gargantuan also includes Pepperjack cheese, Tobacco onions, Creole mustard, cayenne ketchup, lettuce and tomato. Trust me on this one, order this burger as is. You won’t be dissapointed. It’s a little bit savory, a little bit spicy and all kinds of delicious. Add a side of Parmesan-Truffle Potato Chips for a blissful tummy.

Despite only finishing half my burger, I still found enough room in my belly to steal some of my neighbor’s Shrimp and Grits. Listen, I didn’t think I liked shrimp and grits but this? It’s like this buttery, savory heaven on a spoon. Incredible and a must-try the next time you’re on the strip.

My travel and accomodations were hosted by Wynn Las Vegas for the purpose of this article, all opinions are my own.

34 thoughts on “Where will you find some of the best restaurants on the Las Vegas Strip?”