“Once a year, go someplace you’ve never been before.”

Its a beautiful land that is covered in rolling waves of sugarcane butting up against endless beaches of both the Caribbean and Atlantic Oceans.

An island that will interest your mind with its rich culture and history, captivate your taste buds with its Caribbean fare and enchant your senses with miles of lush rainforests, lava formations, seaside lagoons, and monkeys.

The charming island of St. Kitts is, in a word, engaging.

Fun Fact: Yes, there are wild African green (or “vervet”) monkeys around every corner as their population is actually larger than the human residents of the island!

More than just a dining experience, Carambola Beach Club offers an ideal way to spend your day off the cruise ship or hotel grounds. Come in the afternoon for a light lunch and spend the day lounging amidst day beds, lounge chairs and love seats. Or hop into the Caribbean waters for some fun through the aqua sports facilities. After a day of entertaining yourself, you can freshen up at one of restroom facilities complete with a shower in preparation for their fine dining options available for dinner.

Carambola offers lunch and dinner in their beautiful restaurant on the beach. The restaurant features international cuisine with a Caribbean flair offering exotic appetizers like Caribbean Spiny Lobster Salad to traditional entrees like Beef Tenderloin.

Lying just a short way off the beaten path, about a quarter mile from the cruise ship port, lies the hidden gem that is El Fredo’s. This casual dining restaurant offers fresh, authentic Caribbean food. It’s one of those places the locals regularly dine and tourists consider themselves lucky to find. Outside it’s brick enclosed patio the daily menu is written in chalk with daily specials such as stews, mutton, conch and chicken roti.

If fresh caught local seafood is what you’re after, it really doesn’t get any more fresh than at Sprat Net. This incredible fresh-catch restaurant 20 minutes north of Basseterre in Old Road Village is only open for dinner because the owners are fisherman who fish in the morning and then serve their daily catch in the evening. Options on the menu include bbq lobster, ribs, chicken, steamed catch of the day fish, and pizzas. It’s all served up in a casual atmosphere complete with a full bar.

Tip: Be sure to stay after dinner as the evening gets jumping with a live band and tons of locals stopping in to dance and sing the night away.

A UNESCO World Heritage Site known to be one the of the best preserved historical fortifications in the Americas. The construction of the Brimstone Hill Fortress began in 1690 and continued intermittently for just over 100 years until completion. Today, it serves as both a testament to the strength of the African slaves who built it and the British military who designed it. 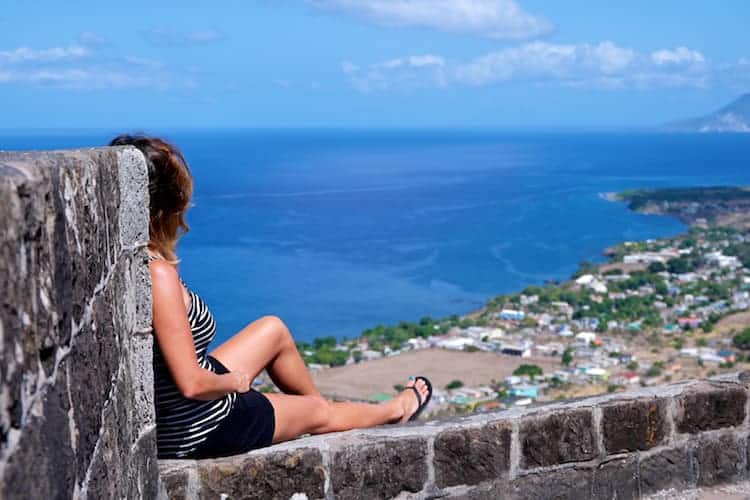 Sitting atop steep slopes featuring awesome panoramic views of mountains, fields, towns and the expansive sea, Brimstone Hill Fortress sits nearly 800 feet high. It’s constructed of stone crafted from hard volcanic rock and limestone drawn right from the very ground it resides. As you reach the precipice and inhale it’s salty air, there is little doubt as to why it’s a winner of Trip Advisors 2015 Travelers Choice Award. 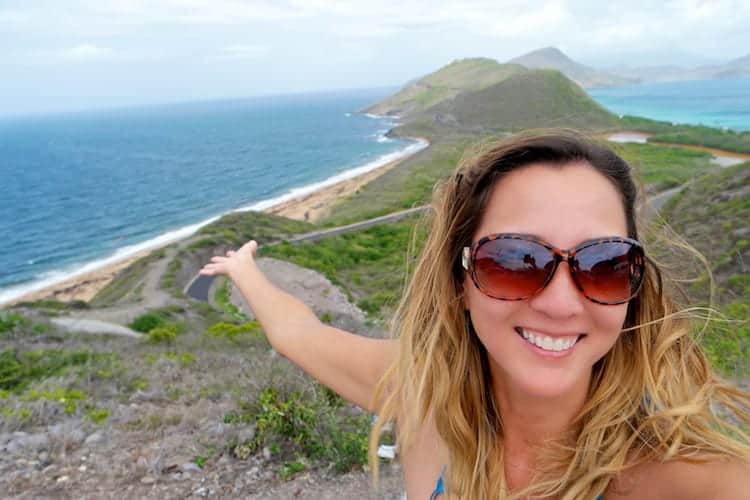 Within the two bodies of water, you’ll see lush, green foliage and the gently sloping hills of the southeast peninsula of St Kitts from your vantage point above. You’ll even be able to see the neighboring island of Nevis in the distance.

A four-hour excursion that covers a 30-mile circle around the island, you’ll complete 18 miles by rail and 12 miles by catamaran on this popular attraction. Hailed as one of the most beautiful train rides in the world, the St. Kitts Scenic Railway was originally built between 1912 and 1926 to deliver sugarcane from the fields on the island to the sugar mill in Basseterre. Traversing tall steel bridges spanning deep canyons and winding thru small villages, the tour leisurely meanders along the Northeastern coastline, allowing you to get up close and personal with the island of St. Kitts before arriving at La Valle Station.

From there, travelers board a catamaran to sail along the western coastline where you can take in the Brimstone Hill Fortress from the sea along with extensive views of small fishing villages, abandoned sugar estates and steep mountain slopes. It also passes by Pass Old Road Town, the first British settlement, and sails around “Bloody Point”, where the French and the British came together to destroy the power of the Carib Indians in 1626.

31 thoughts on “How to Get Beyond the Beach in St. Kitts”