Walt Disney World has spent the past two years creating and expanding the new Fantasyland in Disney’s Magic Kingdom Park. Nearly doubling Fantasyland’s size, the expansion created two themed areas, the Enchanted Forest and Storybook Circus that allowed for more Disney characters, stories, and attractions to be apart of the magic.

Guests visiting the Magic Kingdom can already explore most of the new Fantasyland expansion, as the majority of the reveal happened earlier this year. The final piece of the project however, has been largely under wraps until now. 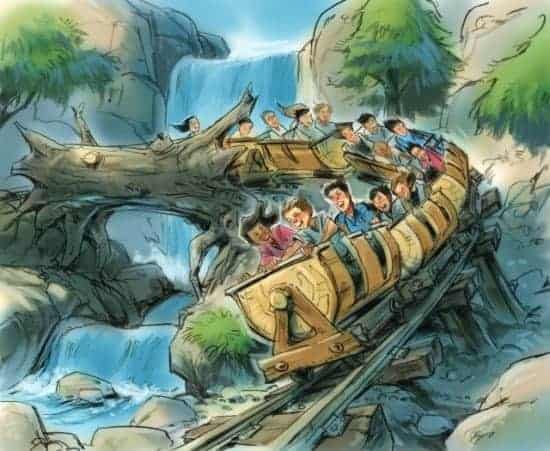 Opening Spring 2014, the Seven Dwarfs Mine Train roller coaster will take over where Snow White’s Scary Adventure once was, adding a new, thrilling ride to the otherwise tame “land.” Disney offered fans a first look of what the completed attraction will look like and provided a bit of insight as to what guests can expect when the attraction opens next year.

The Mine Train roller coaster will be an experience, varying in speed, slowing down for the elaborate dark ride-style moments and picking up quickly for the outside portion. The family-style coaster will also feature a first-of-its=kind train of ride vehicles that will be mounted in cradle-like pivots allowing the cars to swing back and forth during the ride, similar to what the dwarfs did in the classic film.

Music from the original film will accompany the ride along with animated and advanced Audio-Animatronics figures of Snow White, the Seven Dwarfs and forest creatures.

Guests will be able to enjoy an interactive queue that will offer a variety of activities themed to mining while they wait. For older guests who may want to pass on the activities, they will be able to enjoy something unique about the attraction, in that guests will be able to see around all sides of it, seeing different themed elements throughout the different viewpoints. There will be a wooded and shady entrance leading to the Dwarfs’ cottage in the front, and from the back, it will resemble a seaside village opposite The Little Mermaid complete with a waterfall.

While the official reveal date hasn’t been announced yet, Disney has said that the speed of their progress is due to the fact that they want to spend their time making sure that the magic is perfect before the attraction opens. With how exciting the attraction looks so far with the artwork designs, the Seven Dwarfs Mine Train is easily worth the wait!