Since 1911, March 8 has been celebrated as International Women’s Day. In China and 14 other countries, people get the day off work; in Bosnia and Italy the men give flowers to the women; and in Cameroon, women dance in the streets showing off outfits made from Women’s Day fabric.

In 2013, women can be doctors, lawyers, celebrities, astronauts, hold the esteemed position of Speaker of the House, serve in the military, have the right to vote and the right to choose abortion. Yet we still haven’t made enough progress in gender equality!

As an educated female with a Bachelor’s degree, I get angry when I think about the gender pay gap that exists today. Progress has been made, but the glass ceiling is still intact. As of today, 40% of wives make more money than their husbands. Also, 60% of the college students in the U.S. are women, and earn the majority of doctorate and masters’ degrees. 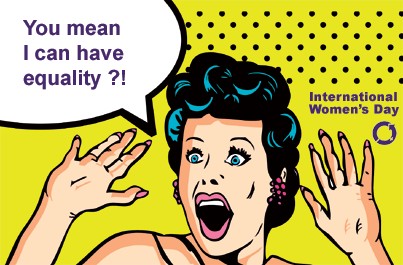 While its important to celebrate our progress, its equally important to continue working towards equality. As of 2011, there were only 12 women running Fortune 500 companies. And in 2011, 31.5 % of all lawyers are females, but only 19% of the equity partners are women. Gender equality isn’t just an issue for average women like myself, but it even impacts celebrities.

Oprah has experienced immense success, and is on the Forbes Most Powerful Women List, no woman, including Oprah, is in the top 10 on the Forbes Rich List. How is that even possible?

In 2010, a Human Rights Watch report studied parental leave policies in 190 countries. They found the United States was one of only three countries including Papua, New Guinea and Swaziland that has no legal guarantee of paid maternity leave. Instead, many women in the States are fired when their company learns of their pregnancy, or demoted when they return from maternity leave. Yet in Sweden, where gender equality is embraced, mothers take maternity leave AND 85% of fathers also take parental leave.

I am a woman. I’m also a mother, daughter, sister, and wife. I’ve worked full-time in the corporate world and I’ve been self-employed. I’ve known success and experienced failure. I have firsthand experience as a female employee that was more qualified than my male colleagues, produced stronger results, but earned less money. I want gender equality for myself, for my daughter, and for future generations.

Throughout the world, gender-based violence is responsible for more deaths and disabilities among women of childbearing age than cancer, malaria, traffic accidents and war combined. This isn’t just a women’s issue, this is a world issue! What will you do to help this change?

13 thoughts on “Women Can Be Anything, Anything but Equal”