He’s a by the books kind of guy, following the rules and living within a budget. She’s rowdy, uncouth, a thief, loud and obnoxious, and a demon in the sack. He’s a husband and father of two children, with a baby on the way. She’s lonely, loves to shop, drinks melonballs like soda, and can use a bobby pin to unlock handcuffs in less than a minute. Together, they’re Sandy Bigelow Patterson. 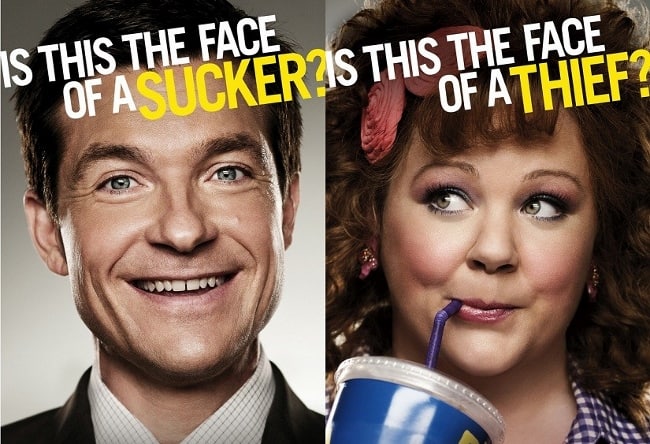 In “Identity Thief” from Director Seth Gordon (“Horrible Bosses”), Jason Bateman is the “real” Sandy Patterson and Diana (Melissa McCarthy) (“Bridesmaids) is the champion con artist that has stolen his identity, and is wreaking havoc on his personal and professional life. With his money, she’s buying new cars, jet skis, getting pampered at the spa, and buying rounds at the bar. When the laid back businessman (Bateman) has his credit card declined at the gas station, he realizes something’s wrong.

Before he gets to work at his new office, he’s pulled over and arrested for an outstanding warrant, and that’s just the beginning of his problems.Realizing his job and financial future are on the line, and the Denver police aren’t going to help him clear his name, he takes matters into his own hands. Hopping on a plane to the Sunshine State is the easiest part of his trip, because “Sandy” aka Diana, isn’t going down without a fight. She throws throat punches with ninja like speed, but runs in slow motion. The film follows his journey as he tries to negotiate, bribe, coax and wrangle her to Colorado on a 2,000 mile road trip while avoiding gangsters, a skip tracer, police, and snakes.

Melissa McCarthy steals more than an identity in the film, she steals the spotlight. In her first lead role, she performed most of her own stunts and used improv throughout the film. (the guitar scene wasn’t scripted) The two, McCarthy and Bateman, share some awesome chemistry, and generate a lot of laughs as they duke it out! Be warned, there are some things that can’t be erased from your memory, Big Chuck (Eric Stonestreet) in his underwear, Big Chuck’s bares ass, and Stonestreet and McCarthy dirty dancing. In this case, the audience needs a safe word! Ewww!

The good news, the trailer doesn’t have all the funny scenes, the bad, the movie follows a predictable formula. Without McCarthy, the film wouldn’t have been nearly as funny or entertaining. Fun fact: the original script called for the “thief” to be a male role, but after Bateman saw Melissa in “Bridesmaids”, he requested they change the role and signed her for the part.

I attended a press screening to facilitate this review, however all opinions are my own.

3 thoughts on “McCarthy Steals the Spotlight in Identity Thief”