Korean BBQ is something I could eat every meal, every day, forever and be just as happy as the first day I ever had it. My favorite is the short ribs (Kalbi or Galbi in Korean) – a finger licking, sweet dish that never disappoints.

I recently came to realize that I’m about to be 38 years old and I have never once attempted to actually make Kalbi, my most favorite meal in the world, myself. And by make, I mean buy plain short rib meat and create the marinade from scratch. Why? Well having a 100% Korean mother who still prepares all the traditional dishes plus living in Southern California where you can stop by any Korean grocery store to pick up pre-marinated meat that you just throw on the grill has definitely spoiled me. And to be honest, when the pre-marinated short ribs are the exact same price of the un-marinated short ribs, then why would I bother to go through the trouble of making it myself?

The answer is simple. Because now matter how good you think that pre-marinated stuff from the store is, I promise you that when you make it yourself with this recipe, you’ll never be satisfied with the store’s version again! Besides, I tend to forget that while I might be spoiled in what’s available to me, YOU guys may not be so lucky. I have met so many friends over the years mention how they had Korean BBQ “that one time” and loved it but never had it again because the restaurant was not local to them or whatnot.

And that makes my heart hurt. No one should be deprived of this deliciousness – especially when the ingredients are so common and its very simple to make! 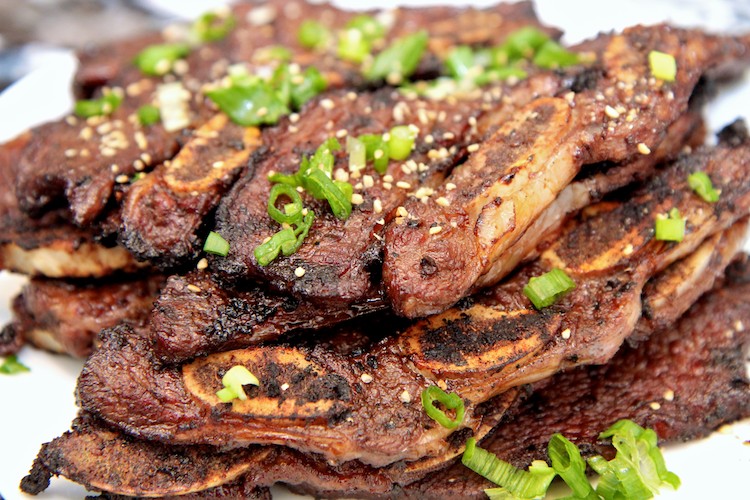 If you try only one recipe all year, try this one. You’ll wonder how you ever lived without it :) You’ll notice the recipe calls for quite a bit of brown sugar. DO NOT SKIMP on this!