Who do you become if you can’t be you? That may seem like an odd question, but think about it for a moment. If something was taken away from you that made up a large part of your inherent self, what would you do? If a piece of your identity was suddenly gone, how would you fill that missing part? Would you be able to find a new sense of self? Could you find a way to keep going while still maintaining the same principles and outlook on life? It is a difficult situation to comprehend, one that most of us will never truly experience, but for Mike Prickett, it became a reality.

Mike Prickett is a world renowned ocean cinematographer. He has spent his life capturing the beautiful, rare, and terrifying moments in the blue depths of the oceans. This incredible career path started at the age of eighteen when Mike was in a terrible car accident that left both of his legs broken in multiples areas. Doctors were unsure if he would ever walk again, but they encouraged him to swim as part of his therapy to regain strength.

What started as a way to heal his broken legs turned into a passion. Mike began capturing incredible footage in oceans around the world, as well as shooting commercials for diving gear and working on movies. His work grew into an acclaimed career, and he has worked on films such as X -Men 2 and Blue Horizon. Mike also worked on the award winning documentaries Riding Giants and Step Into Liquid, and his footage has been featured in National Geographic, on many of the National Broadcasting companies, Fox Sports, ESPN, and even the Sundance Film Festival.

Living in Hawaii and constantly filming in the oceans made the water an existential piece of Mike. His life revolved around the powerful waves, and its presence was slowly weaved into the fibers of his soul. The water had been a saving grace that allowed Mike the strength to learn to walk again after his car accident. Swimming in those serene depths and filming what few people ever see, gave Mike a unique glimpse into the awe and beauty of this world. The ocean became a piece of his identity.

Then, in March of 2012, Mike was in Tahiti filming a commercial for wet suits. While in the water, he saw a diver start to sink, and without hesitation Mike dove down to save him. In the midst of the rescue, the diver used up the rest of Mike’s oxygen, and Mike was forced to rise to the surface. This rapid ascent gave him decompression sickness otherwise known as “the bends.” This happens when gas such as nitrogen is dissolved within the body under high pressure, and when that pressure is released the gas turns into bubbles. (Think of carbonated water. When the top is open and the pressure is relieved, bubbles rise to the top.) When this happens in the human body, it can have devastating effects and can even be fatal. For Mike, he was paralyzed from the chest down.

Also read:  Five of the Best Surf Spots in Europe for Beginners 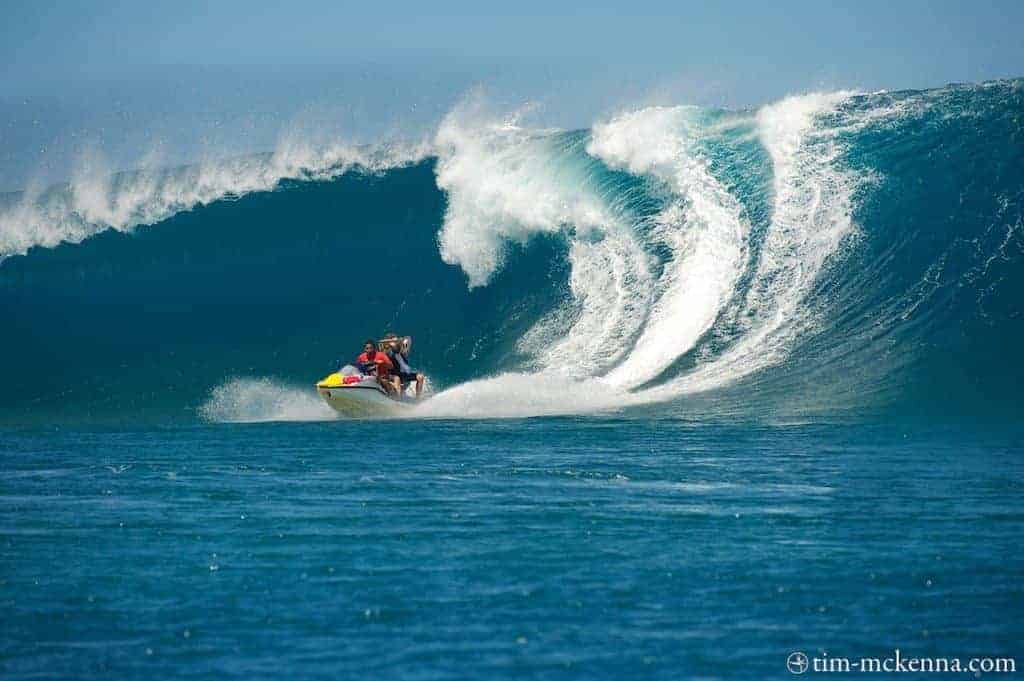 He was rushed to hospital where he received hyperbaric oxygen therapy. Doctors told him if he had any chance to walk again, it would be within the next six months with a lot of treatment and therapy. A whole new journey began for Mike that day. Not only was he fighting to learn to walk (again), he was trying to discover the person he would be if he couldn’t walk, if he couldn’t swim.

Reel Journey covered Mike’s story with weekly webisodes that captured his experience. In his clips, Mike is real and honest about how he feels. It is not sugar coated with an inflated can-do attitude. Mike talks about his fears and difficulties with a mature grace but still a strong sense of determination. In one episode, he discusses his excitement about getting in the pool for the first time in months only to realize that it did not bring the same comfort it had previously. He had been hopeful that getting back in the water would be easier, and it would be the first step to getting back to his old self, but he was utterly disappointed.

As he works to regain strength and movement in his legs, he soon finds out that he has met his cap on his insurance, and he must return home to rehabilitate on his own. The fact that he will no longer have the support of his therapy team only puts more stress on the situation, and he leaves the rehab center with a heavy heart. Mike discusses all of this candidly in each episode, but he still manages to keep looking forward.

While Mike will never be able to walk and swim as he once did, he has not lost his passion for living. His profound journey has changed his direction, but it has not taken his ability to participate in life. As you watch the film of his recovery, the videos are peppered with clips that Mike shot in his career. There are stunning angles, explosive crests, and intoxicating sunsets staining the water, all captured by one man. The images are moving, but the only thing more incredible than his work are the stories of the people’s lives that he touched. So many people offer best wishes to Mike and praise his work, dedication, and attitude in life. It is a testament to the goodness his has shared in this world.

Mike may have a different set of abilities in his new life, but the same fire and keen eye for beauty is still present. Our lives may change and force us down a new path, but it is our outlook that determines our success. Even through such an incredibly difficult journey, Mike has managed to focus on the joy in his life and push forward with a rare strength. His story is an inspiration to all and a reminder that our lives can change in a moment, and we must cherish every second.

24 thoughts on “Mike Prickett: An Incredible Journey of Recovery”