What would you do if you were stranded in the middle of the Indian Ocean with a hole in your sailboat? How about we add a hurricane or two into the mix? Now what? Would you give up or would you fight to stay alive? 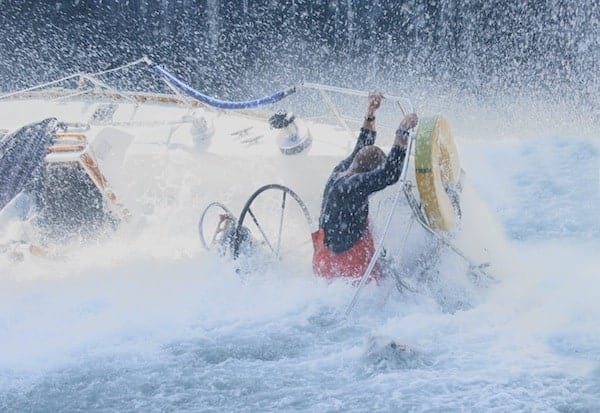 “All is Lost,” starring Robert Redford, is an artsy film written and directed by J.C. Chandor. Robert Redford plays a sailor stranded in the middle of the Indian Ocean after his sailboat has been hit by a stranded shipping container. He patches the hole, but has lost all contact with the outside world. Redford faces brutal heat, major thunderstorms, and has to teach himself to navigate the stars to find his way home. Eventually, Redford has to abandon ship to a life raft and survive yet another storm.

When the movie began I was so engrossed in what happened to the sailboat that I hadn’t realized there wasn’t any dialogue. I guess if you’re stranded on a boat by yourself, there really isn’t anyone to talk to. It didn’t really bother me at first, but after about ten to fifteen minutes of silence, I wasn’t quite sure if it would work. Surprisingly, after a while, you are so into the movie that the silence fits perfectly with the movie. Robert Redford turned a silent movie into a movie full of emotion and drama. There were times that I was on the edge of my seat, worried that he wouldn’t make it through, and there were times where all I wanted to do was cry. You find yourself hoping and praying that he makes it. It was like a cross between the television shows Survivor and Man vs. Wild. 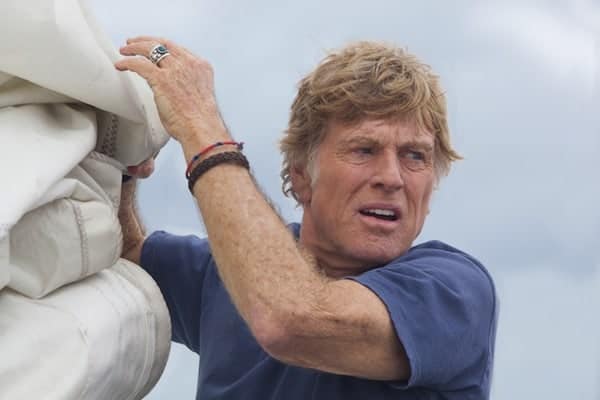 You’re probably asking yourself, “Wouldn’t you get bored just seeing this one character on a boat the whole time?” The answer is yes, and no. Yes, there were times that I felt like I was going to just give up on him, but also there were times where the action outweighed the lagging parts. Overall, I felt that this movie would be great for those who like Indie films that make you think.

In my opinion, Robert Redford had an Oscar winning performance. If you can have me follow a storyline solely based on the actor’s facial expressions, then you have my vote. The videography was top-notch. There’s not a lot of space on a sailboat to shoot a movie, but you couldn’t tell. Every time Redford was in the boat, you felt like you were right there with him. You actually learn a lot about how to run a sailboat by his actions. The storm scenes make you feel like you are actually in the throws of it with him. Not only do you get to see what’s going on above the water, but also below.

Overall, I would definitely recommend this movie to those who are interested in sailing or like independent or artsy films.

Academy Award® winner Robert Redford stars in All Is Lost, an open-water thriller about one man’s battle for survival against the elements after his sailboat is destroyed at sea. Written and directed by Academy Award nominee J.C. Chandor (Margin Call) with a musical score by Alex Ebert (Edward Sharpe and the Magnetic Zeros), the film is a gripping, visceral and powerfully moving tribute to ingenuity and resilience.

Surf and Sunshine’s Entertainment contributor Laura G. attended a press screening of this film. All opinions remain my own.