My oh my! Oh wow, oh wow what an adventure! Where to start and where to finish on my experience with Kia and a day at the races at SEMA 2014?

The SEMA (Specialty Equipment Marketing Association) show was held in the Las Vegas convention center the first week of November, incorporating over 3 million square feet in four separate buildings. If that wasn’t enough, the outside of each building were also decked out with hundreds of additional displays of custom tricked cars and trucks.

Inside the display halls was every imaginable vehicle after-market product that one could conceivably think of. There was one display hall that just featured tires and custom rims – everywhere you looked there were beautifully restored classics cars, trucks and motorcycles with paint jobs so realistic you felt like you could fall right into them, parts chromed that I didn’t even know existed or for that matter parts that I didn’t even know existed at all! This show was the alphabet soup of after-market parts, attended by industry representatives from all over the world.

Amidst all of this, Kia steps up to hit it out of the park! For Kia, it wasn’t about just showing off their vehicles. It was about what they could do to make them more fun. They brought a theme to the show “a day at the races” which highlighted their successful winning 2014 racing season. Kia held a press conference on opening day at 9:30am with the unveiling of five truly unique vehicles that fit their theme – including the new Kia Optima 2015 race car, the center piece of their theme (more on that below); 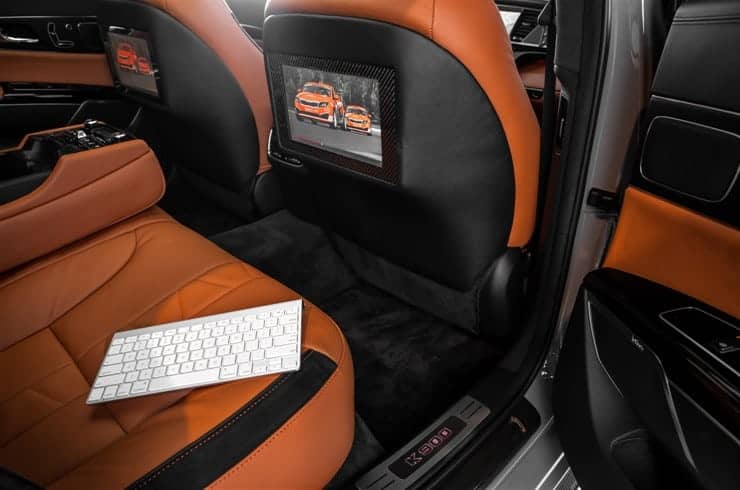 and a K900 that was tricked for the drivers of the team – think lowered, upgraded suspension, large wheels, turbo, a trunk with special compartments for helmets and racing suits. 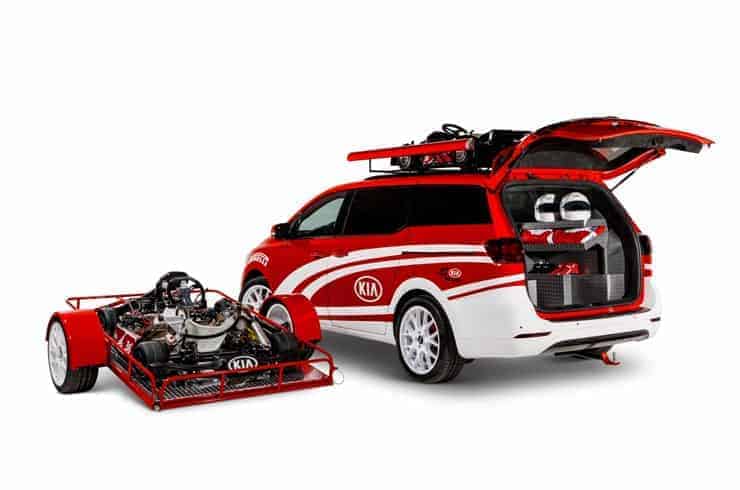 Since most racers get their starts driving go carts, Kia took a Sedona converted it to a traveling garage put a go cart on the roof on a rack and one on a trailer being towed.

The next two unveilings dealt with the fun side of racing, the Ballast Point Sedona Beer Truck and the Smitten Ice Cream Soul EV with trailer. Both Smitten and Ballast Point did something unique for this type of a show by serving up samples of their products. In fact, word got out so fast that Smitten served over 750 samplers of really really good ice cream each day in less than an hour! Ballast Point was changing kegs and kept on pouring at least until early afternoon.

After the show, we shifted gears and spent a sunny day at Spring Mountain Motor Speedway with the Kia Racing team. We were greeted by Russell Smith, team owner and two of the winning drivers from this year, Mark Wilkins and Nic Jonsson. Between them they had 13 podium finishes and 5 race wins, winning the Pirelli World Challenge GTS. We were given a brief overview of the Kia Optima’s race cars by team owner Russell Smith, and then Mark took our group on a track drive in one of the 2015 Sedona’s that we drove up to explain the lines, the curves, the brake areas, the straight a ways and how to get in and out of the pits.

From here it gets fast, as in real fast, as there were two cars set up for right seat ride along. It starts with a helmet, a racing suit and trying to crawl through the roll bar cage to get in, then the seat belt, think 4 point child’s car seat only MUCH tighter. We roll out of the pits, start with an easy lap and then via hand signals thumb up for let’s go, hand flat for stay, thumb down for slower. Of course, you’ve always have to go with the thumb up!

From there it was giddy up and go, with my head banging on the roll bar, and my neck muscles straining to keep my head in place. My eyes were confused from the blinding G force, and I was thankful that the seat belt was doing its job. Two of the turns were marked with signs 3-2-1 to signify 300 yards, 200 yards and 100 yards. When I asked Russell what was the point he responds “when we get to drive it would be a heads up for braking, at the 1 sign you must be on the brakes.” Both drivers that I rode with, Nic and Mark, broke at least 50-60 yards past the 1 sign, hit the curve and accelerated out, so I’m not sure if those signs actually pertained to them! 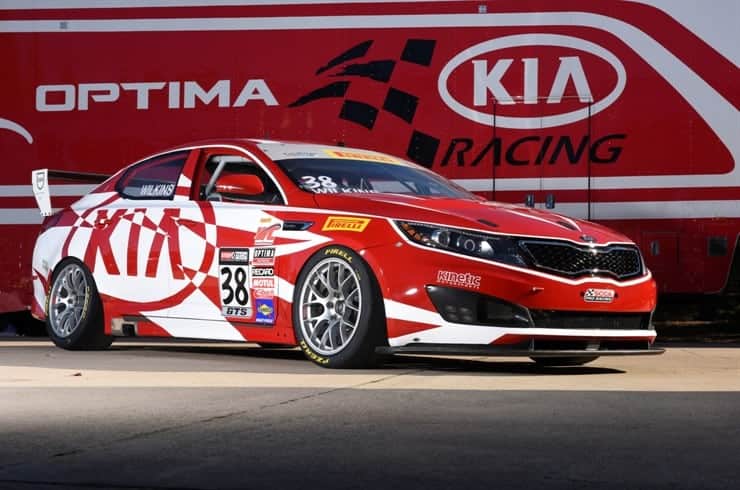 Since both of the Kia race cars are front wheel drive Optima’s, braking plays a much bigger role in driving the car. When the drivers are coming into a curve, its brakes, down shift no clutch, foot on the gas to keep the engine spooled, accelerate – all done in the blink of an eye. The clutch is only used for entering and exiting the pits. Interesting point on this is the gear box that came out of the factory is the same one that has been used through the whole race season – talk about durability!!

Everyone was given the opportunity to take out and drive on the track by themselves a single seat Optima, to get the feel of driving a real race car. Engine rumbling, tires and brakes smelling, gears shifting, with or without the clutch, at any speed you wanted. It was your day at the races!

The whole teams, Russell, Mark, Nic plus all of the support members were great and answered a ton of questions, did interviews posed for pictures , they really went out of their way to accommodate us and make the day a very enjoyable experience.

The day at the track completed we returned to Las Vegas via our Sedona then had the opportunity to test drive a 2015 Soul EV. I found the Soul EV to be very quick, if you jumped the accelerator it snapped you back in the seat, the seats were really comfortable, the interior is really laid out well and it was really quite fun to drive. Just going around the block a few times we turned some heads.

The Kia brand is well thought out, the Kia team is very dedicated to their product and the whole experience was a blast.

Thanks to Kia for an incredible day and week in Las Vegas. Travel and expenses were covered, but all opinions remain my own.