If you don’t know how the Make-A-Wish® foundation began, the story is one of the most inspiring stories you’ll ever hear. It began thirty years ago after a seven year old boy with Leukemia, Chris Grecius, wished he could be a police officer for a day. When those involved witnessed the joy and laughter it brought Chris and his family, they thought about the possibilities of making other children’s wishes and dreams come true. So together, they founded the Chris Greicius Make-A-Wish® Memorial, which is known today as simply Make-A-Wish®.

This blog post is part of a paid SocialMoms and SUBWAY® blogging program. The opinions and ideas expressed here are my own.

Make-A-Wish® is known well known for granting wishes to kids with life-threatening medical conditions. While you may know the story of Chris Grecius, I’d like to remind you of a more personal story that Kristin has previously shared with you about her best friend’s nephew, Ryan, who was born with Cystic Fibrosis. When he was seven years old, Make-A-Wish® notified his family, they were granting his wish to visit Walt Disney World. A few days before they were scheduled to fly from Indiana to Orlando, Ryan broke his leg.

With a heavy heart, his parents contacted the folks at Make-A-Wish® to cancel the trip. Can you imagine the elation they felt when they were told, “No way you’re canceling, we’ll work around his broken leg, and make arrangements so he won’t have to walk around the park.” Determined to make Ryan’s wish come true, and enable him to experience the magic of Disney World, they had a different Disney character push him in a wheelchair everyday. I know Ryan felt like a rock star, as Chip and Dale rolled him to the front of the line at every ride.

When talking about the experience his Aunt said,

“The thing aboutMake-A-Wish® is that they make the kids feel normal. Whatever it is they are going through,Make-A-Wish® works around that. The kid gets to be a kid. They provided top notch medical help (at least at Disney), and took care of arranging all supplies and equipment . Everything he needed for his treatments was there waiting on him. It also takes the pressure off of the parents. They even provided a baby sitter for my nephews and paid for their parents to go out to dinner one night alone!” Heather S.

In Ryan’s world, his days revolved around breathing treatments, medication, and hoping he was able to attend school, instead of spending more time at the doctor’s office or a hospital. Like every child he dreamed of visiting Walt Disney World, but he also wanted more than anything to be like all the other “healthy” kids. By granting his wish, he was able to travel, just like other kids.

Almost 75% of wishes involve air travel, which is the largest cost associated with wishes. It would take approximately 50,000 airline tickets, the equivalent of 2.5 billion airlines miles or $37.5 million, each year to cover the expenses incurred with sending wish kids and their families to and from their incredible experiences.

And of course, Make-A-Wish® can not possibly do all this on their own. They rely on partnerships from caring and giving brands, like SUBWAY® restaurants. 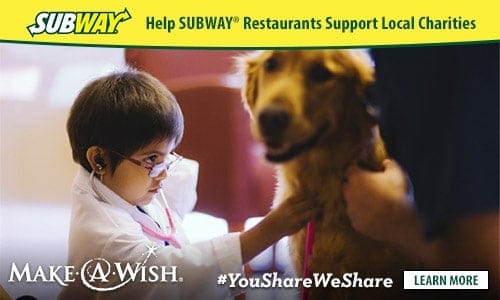 From now through August 31st, SUBWAY® Restaurants in the USA and Canada are joining forces with several charities to give back to the local community with their “You Share. We Share.” campaign. By encouraging everyday people like you and me, their customers, to get out and share their weekends with SUBWAY® Restaurants in the Greater Los Angeles area, they will in turn share right back by donating a percentage of weekend sales, up to $100,000, directly to Make-A-Wish®!

So this brings me back to Make-A-Wish®, which is the chosen charity for my local area, Los Angeles. I’m happy to be able to support them in a way that doesn’t impact my budget, yet still makes a great big impact to theirs! Be sure to like their Facebook page using the widget below and then get out and do some social good this weekend :)

This blog post is part of a paid SocialMoms and SUBWAY® blogging program. The opinions and ideas expressed here are my own.